When I first heard about the assignment, I was anxious at the thought of having dinner with people whom I did not know. As a relatively quiet person, I was nervous about the idea, but it turned out to be a great experience.

For this assignment, I was paired with Jamie. Her friend Shelby opened her apartment to us for the night.  The night’s menu consisted of spaghetti with marinara and alfredo sauces made by Jamie and Isaac, bruschetta made by Shelby, cookies from Karla, and French toast that I made. There was a total of six people in attendance, only two of which I knew beforehand. In attendance was Jamie, her friends Shelby, Thomas, and Isaac, me (Callie), and my friend Karla.

Everyone in attendance was a member of the Honors College here at WKU. However, Karla and I were the only freshmen, while the others were all seniors. Jamie is a psychology major from Lawrenceburg, KY. Shelby is also a psychology major from Lawrenceburg. Thomas is from Mayfield, KY and is a biology student. Isaac is studying meteorology and is from Aurora, IN. Karla is also a psychology student and is from both Shelbyville, KY and Los Angeles County, CA. I am a business student from Dunmor, KY. Another aspect that makes this group diverse is religion. Karla and Callie are Christian, Thomas was raised Catholic but no longer practices the religion, while Jamie and Isaac identify as being LGBT and practice no religion.

Throughout the discussion, Jamie and I would take turns asking questions to keep the conversation going. At times we would get off topic by sharing personal stories as we discovered different things that we had in common with each other. These connections allowed us to relate to each other and connect our similar experiences. These topics included H4 and living in Minton Hall. We discussed that H4 allowed us to meet many new people, many of which we would not have taken the time to meet otherwise. While each person’s experiences took place in different years, overall we shared similar opinions and circumstances. We covered topics including citizenship, social issues, diversity, religion, the kind of person we want to be, and many more.

We began the discussion with the question: What do you think are the best things about our world today? The answers were light-hearted and included food, puppies, warm weather, and friendship. The following question required more serious answers: Beyond voting, paying taxes, and following laws, what does citizenship mean to you? Many of the answers conveyed a similar message of truly caring for others and taking a stand for your beliefs. Isaac suggested that citizen should involve being politically engaged outside of voting and interacting with your local government. Others suggested being engaged with others and championing for a cause. These responses can be related to the class question of: How do we live well together? As we got off topic talking about out different experiences through the years, we came to the consensus that communication is key to living well with others. For example, Thomas and Isaac were roommates for several years and coming into college they had never met each other before. They agreed that talking things out allowed them to overcome their differences and become friends.

One of my favorite questions asked was: Have you ever had a conversation with someone from a really different background than yourself? I found it interesting to hear everyone’s personal account of their interactions with diverse people. We discovered that because of these interactions our worldviews have been expanded. Many of us grew up in small towns with little diversity, and as a result, our experiences with diversity have had a lasting impression on us and our worldviews. Isaac discussed how the ability to travel has shaped who is he as a person. Shelby told about her experiences staying in Europe with an Italian family where only one person spoke English. She found it interesting that they would listen to American music even though they were unable to understand it. Thomas spoke about his internship at the National Institute of Health, during which he lived in a house with an older woman from India and worked alongside people from all over the world. He found it exciting and educational to learn about other diversities in this way. Jamie explained that in elementary school she had friends who were Chinese and Japanese. She told that her best friend was a Bosnian refugee whose parents did not speak English. I told of my experiences at GSP where I met people from varying backgrounds, cultures, and religions. I found this time especially exciting, as it was my first real experience with diversity. Karla is from Hispanic dissent and grew up bilingual. She discussed that she was among the small diversity in her dominantly white neighborhood.

Overall, I found this experience worthwhile and enriching. Going into the assignment I was afraid that we would not be able to keep the conversation going considering I had never met the majority of the people in attendance. However, this was not the case at all. Through discussion we discovered many things that we had common with each other, which made the night flow more smoothly. The environment was very welcoming and it seemed there was no subject that was off-limits. I enjoyed hearing each person’s experiences and concerns. I was reminded of the fact that you cannot judge a book by its cover. While the majority of us came from small towns, we all were very different. Each of us held our own set of experiences, opinions, interests, and beliefs. Part of citizenship is living and interacting with others. In order for us to do so successfully, we must understand where each person is coming from and why they hold the positions that they do. Through this deliberation, I was able to get a glimpse of what the world could be like if we took the time to talk to those around us on a daily basis. 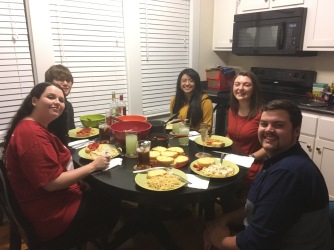 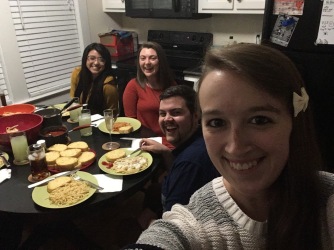