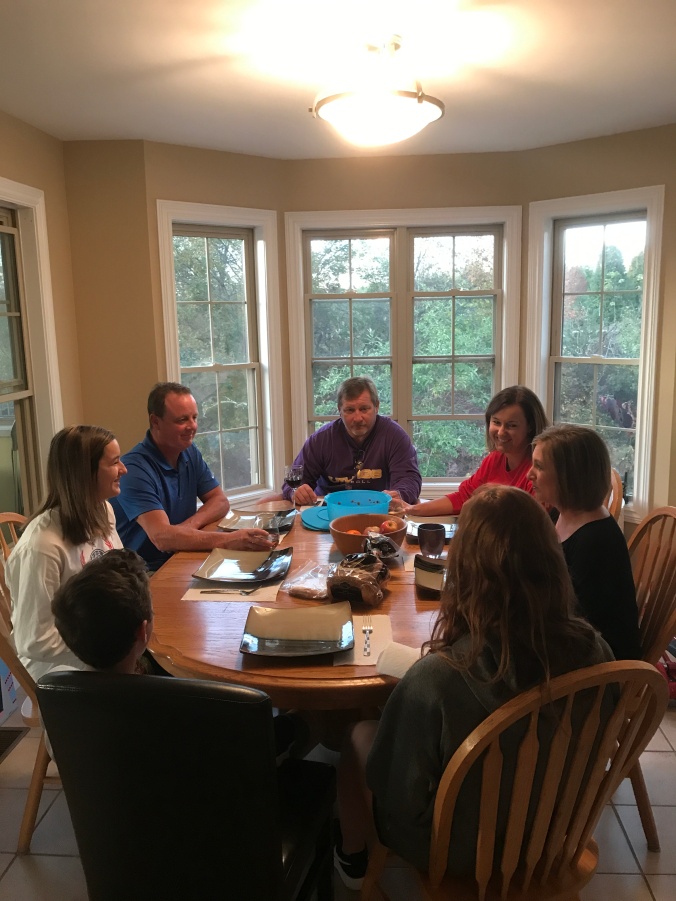 My Kentucky Kitchen Table took place in my hometown Shelbyville, Kentucky at my house. I had 7 people at my house to participate in this dinner. The first four people were my family members. My father, Mike, is 50 years old and is a sales manager for Valvoline oil. He travels quite a bit for his job and experiences many different areas but is very involved in our family. My mother, Stephanie, is also 50 years old and is a goal clarity coach in Jefferson County Public Schools. She is a Christian and is dedicated to her church and community. My twin sister, Lauren, is 18 years old and attends Northern Kentucky University. She is majoring in elementary school education and came home for the weekend. My younger brother, Evan, is 13 years old and is in middle school in Shelby County. He is into fishing and playing baseball which takes up most of his time. The other 3 people I invited for this dinner assignment was a family that recently moved to our neighborhood over the summer before I went to college. One of the family members was Bill, a 47-year-old father who is a real estate appraiser. He grew up catholic and is a strong republican. His wife, Jennifer, also attended the dinner and is a 45 years old. She is an accountant and described her position as a controller. She is also catholic because of her husband and Is opinionated about the government. Their daughter, Anna, is 16 years old and attends high school in Shelby County. She is a cheerleader and also takes classes at the local community college in the area. My family fried fish and made pasta salad while the other family brought brownies and some kind of ranch dip. I have only met them a few times over the summer when my family introduced them to the neighborhood. It was interesting getting to know them and their views on life. They contribute diversity to the group because they have different religious views than my family; they are catholic. They also have strong beliefs about republican viewpoints and government laws which I thought would contribute to interesting conversation.

The conversation at dinner focused a lot about citizenship and personal viewpoints. I was nervous at first that there was not going to be much to talk about or the conversation would get dull but I was surprised by the opposite. The first question I asked was the required question: Beyond voting, paying taxes, and following laws, what does citizenship mean to you? Stephanie started the conversation and was discussing how citizenship means getting involved in your community, state, and country. Everyone else basically agreed but then Bill brought up another point. He said that citizenship was being a good neighbor and then started talking about how he believed that paying taxes was one of the last things he thought about when he considered citizenship. I thought that was very interesting because that is one of the national requirements for having a job. Mike also brought up freedom and the idea of everyone considers the United States the place of freedom and each citizen gets that freedom. There was kind of mutual agreement on this question.

While looking through the options of questions for discussion, I highlighted a few that stood out and I thought could bring up different viewpoints. One question I asked was how do you think your job relates to your role as a citizen? Stephanie said that since she works for the public-school system, she works for the community and gets the opportunity to teach kids to be productive and be good citizens. That stood out to me because she related her role as citizen to be passed down to the children that she teaches so they can be influenced in their role as a citizen. Jennifer brought up how her job as an accountant requires her to follow ethical policies and deal with money which is a significant part of being a citizen. Mike brought up a valid point that I never really considered. He talked about how he pays taxes and helps with the welfare system which overall benefits our community. I never thought about it that way but it allowed for discussion about the importance of taxes and the welfare system.

Another key theme that was discussed at dinner was the question: do you think we have any obligations to other people in our country or our community? Jennifer brought up how controversial this topic is. She believed that we do have obligations but limited it to the people who actually need help and who want to better their lives. She thinks that we have obligations to people that have good intentions to improve their lives. A good point she brought up was that we need to help people so they can teach their children how to become better citizens. I thought this was a good question to ask because I could relate it to “To Hell With Good Intentions” by Ivan Illich that we discussed in class. This reading really intrigued me because I felt the complete opposite than the author. I brought up the reading to the people at the table and how the author believed that United States volunteers are not helping and can make things worse when providing aid to a poor country. That brought up a very opinionated conversation since everyone at the table is religious and believe attending mission trips and helping the less fortunate is part of what we are called to do. Lauren said she did not agree with what Illich was saying because anything that helps the poorer countries are done with the best intentions in mind. A good point that was brought up was anybody needs help, even our own country. Bill brought up other good points that realized that yes we are fortunate but we work for what we have and other countries perceive us as having bad intentions. This conversation related to what we learned in class about how we solve problems. We discussed how someone was supposed to get help if there is just going to be criticism and judgement every time some tries to help. Everyone at the table agreed that to solve the problem of helping the less fortunate was to go on mission trips and donate money. There is only so much one can do to improve the lives of others without overstepping boundaries. It also related to wicked problems (which I informed the table about what a wicked problem was). The discussion about the solution to this problem was very interesting and there were a variety of options. It just proves how this idea is controversial and our deliberation could work through the ideas.

The last question I asked was what kind of advice would you give to people running for office in our country? I thought this would be a good question to ask since there were different political views at the table. Stephanie took the lead in this conversation because she related it back to her job and role as a citizen. She believes that the people who run for office need to take their role professionally and keep their personal opinions limited. She also discussed how Matt Bevin does not listen to the teachers in the country and is affecting their jobs and retirement. This topic related to deliberation quite a bit because whoever is running our country has to take into consideration the voice of the people. To solve problems and live well together, our country has to have a strong relationship between the leaders and the people to get things done. Jennifer said how whoever is running for office needs to listen to the people and understand what the people want. This is a key idea in deliberation because you need to able to listen to others in order to have appropriate discussions which is what we have been learning in class.

What I have learned throughout this dinner is that citizenship is way more than just voting, paying taxes, and following laws. Citizenship takes into account deliberation, helping others, and getting involved, basically what we have been learning in class all semester. Citizenship plays a huge role in our country and in our lives. What we learn in class is a part of our everyday lives and after this discussion I have realized how important being an involved citizen is. Citizenship is solving problems, living well together, and having more say over our own lives, which are our three central ideas of the class. How we live our lives and how we work through problems as a country will shape and affect future generations. A constant theme that kept resurfacing throughout the conversations was that we need to be good citizens for ourselves and for our children. We need to be good citizens and if we want our children to be like that then we need to set a good example. Citizenship and what it consists of is something that has a variety of meanings. This dinner discussion helped open my eyes to what it means to be a productive citizen in society and what it means from the eyes of different people, which is just like our class and the discussions we have every week.