We had dinner around a kitchen table at 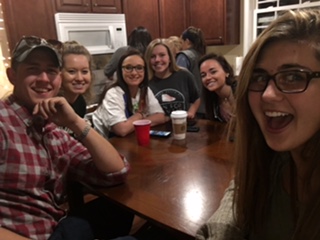 my friend’s apartment. The people that were there included, Andrew, Keaton, Kat, Gabby, Tori, Hayley, Ashlyn, Tatro, and myself. For my descriptions of these people, I thought that it would be best to not only use what they had to say about themselves, but also things I notice or appreciate about them. Andrew is a gentleman. He is compassionate and is genuinely interested in what you have to say whether he agrees with it or not. He is a goofy guy that loves being around good people, and wants to do something with his life. Even though I do not know him that well, I was able to pick up on those things about him very easily. Keaton’s description of herself is how I would describe her as well. She is extremely passionate and dedicated to doing the right thing, she always tries to stay positive and open minded, and she likes to look at the world from multiple different perspectives and learn from different situations. Kat is artistic in everything she does. She has a very bright, outgoing personality. She wants to use her art in art therapy or something else that is helpful. Gabby sells herself short. She gives without asking for anything in return. She instinctively takes care of those around her and has one of he kindest hearts that I know. Tori is a very loyal friend. She is unapologetically herself and brightens up a room when she’s in it. She is honest and will tell you what you need to hear. I do not know Ashlyn and Hayley that well. Ashlyn is carefree and enjoys being around people. She thinks for herself and is very independent. Hayley has a kind heart and cares about other people. She is a little soft spoken, but was insightful when she had something to say.

I think that we had a diverse group. We are all the same race, but we come from very different backgrounds and have different views on politics, life, and on the topics we discussed at dinner. Each person provided some type of dish. Since it is close to Thanksgiving, we had a “friendsgiving” and everyone made/brought something so we would have variety and enough for everyone to eat. We wanted to have a group of people that would give diverse answers and give us a different insight into issues. Everyone that was there respects the opinions of others even if they do not share the same view. I think that the discussion we had left everyone thinking of the points the other side had to make. I would say that I was able to understand a viewpoint that was different from mine.

Our discussion started with the obvious question of, “What does citizenship mean to you?” This question took them a moment to answer because it is not one that you get every day. Keaton had the response that I paid attention to the most. She said that citizenship means having freedom, but to a certain extent. It means being a part of a greater good and working to give back to your country in whatever way you can. Other people chimed in and added some more to what it meant to them. Some meant having a voice in society and being a productive member. Andrew said it simply meant doing your part in society and being good to others. This kind of lead to the question of, “What kind of person do you want to be?” One of the answers that multiple people said is that they want to be someone that people look up to and respect. They want to lead by example, and make a lasting impression on other people. Someone that everyone wants to be around and that radiates positivity. I felt that these answers and the conversation was going to the “Does your religious or spiritual identity relate to how you think we should treat other people? Does it relate to how you see yourself as a citizen?” I worded it differently because of the nature of the conversation, but it had the same meaning. A couple of us there are unreligious, so I agreed with their viewpoints. They felt that religion should not be the reason you are good to people or treat them well. That we are all human beings that deserve respect and kindness regardless of who you are. The religious people agreed with what was being said, but their faith compelled them to treat others well. Most were some form of Christianity and all used the bible as their main form of references. They said that the bible teaches you how to treat people and that being in the church environment made them feel like they were around positive influences that helped them figure it out. From here, I felt that the next question on the list, “Do you think we have any obligations to other people in our country? In our community?” was the logical transition. One answer was that we do have an obligation to respect and support people within the community even if they are different from us. With this question, the election was kind of brought up. It is still a sensitive topic, but one that I do not think I have really discussed with my friends yet. For a few of us, the election was still a wound that we were trying to make sense of, and for others they were happy with the results. The people that voted for Trump said that they wanted change. He was going to fix the economy and fix trade deals. Those of us that did not vote for him said that he was a vile person. He instilled hatred into millions of people and made discrimination okay. Someone that was against Trump said that as president, he was obligated to protect all Americans and not only middle and upper class white people. This conversation went on for a while, but we were all able to agree that regardless of what we believe, the repercussions of the election are tragic and it is sad that people have to be scared to live in their own country. It was interesting how they brought the conversation back to the questions that I was asking. I brought up, “How to we live better together?” because I felt it was appropriate for where we were at in the conversation. Gabby said that we should be there for each other regardless of what we think, and that now more than ever is when people should respect everyone.

Tatro and I were not able to get through all of the questions because the conversations we were having were quality. I think that this might have been the first time that the I have had such in depth conversations casually with friends. It was refreshing to be able to talk to friends about things that actually matter. I learned that regardless of your religion, who you vote for, or what your beliefs are, we tend to gravitate towards being kind and good to each other. I would say that we have learned to be aware and understof what someone else is thinking, feeling, or going through. It was interesting to see an understanding being made when someone gave an answer or made a statement about something that went against what they thought. Sometimes, I would even disagree with someone, but was able to think about it through their perspective. They are my friends and I was able to still associate that with them. What we all realized is that even though you are different from someone, we are all people too and deserve to be treated with respect. My central idea that this all related to, and one I have already mentioned, is “How do we live better together?”. I felt that this conversation and dinner centered on this because of the recent election and events that have followed. This experience was something very enjoyable and eye opening about my friends.