My Kentucky Kitchen Table (KKT) was held in Brandenburg, Kentucky. It was a family based, relaxed dinner. The people who participated in my KKT were three of my aunts, two of my uncles, and my parents. Although it seems like I would know my relatives well enough to not have a great discussion, I had not seen most of them for a year or so. My family usually catches up on an annual basis, so a lot of my aunts and uncles are almost strangers to me.

I had a diverse group of generations and individual differences at my KKT. My aunt, Ellen, is an avid runner and currently works for a government agency. She is in her 40’s and is single. My uncle, Wally, is married to Irene. They are both retired and enjoying spending time with their children and grandchildren. My other uncle, George, is married to Kim, and are in a similar position as Wally and Irene. They are both retired, and they have four grandchildren to give their love to. My father is an employee at Jim Beam (as was George) and is soon set to retire. My mother works at our county’s UK Extension Office where she loves teaching adults and children about nutrition and healthy lifestyles.

To start off the conversation, I asked an easy question to ease some nerves, “do you know your neighbors?” Wally, Irene, George, and Kim live in a subdivision. They said that they do know their neighbors. It seemed like they knew them mostly on a ‘hey, how are you?’ basis rather than a personal level. Ellen lives in Louisville and said that she knew almost everyone on her block. My parents live in the country compared to our relatives. They know one of neighbors well and talk to him weekly. The other neighbor they do not know as well. Overall, it seemed like there was always someone in the neighborhood that they did not get along with or personally know. I found this to be an interesting similarity because we all live in a different type of neighborhood structure. I asked them a follow-up question – is there anything you could do to help your neighbors? Kim said that she should probably join the neighborhood association to try to improve things where they live. Ellen seemed to have an idea pop up at that moment. She stated that she should stop fighting with her elderly neighbor about him cutting tree branches off. All of the solutions given were relatively simple fixes. I think that question got them to consciously think about what they can do to help other people. It seemed that they never had thought about that before which was very intriguing to me. I did not prod any further even though I wish I would have.

I gave them another question to discuss which was, “do you think you have any moral obligations to others?”. I was thinking that they would be stumped by the question, but it was quite the opposite. Every person seemed to be passionate about their response. Some of the responses that were agreed upon were to respect others. They said that we all live together and that we need to be accepting of one another. References to the bible were made at this point and ‘be kind to thy neighbor’ was stated. I was pleasantly surprised at all of their positive and kind responses. I figured their age would factor into that question, but my responses lined up to theirs. A prominent theme of the dinner was brought up by an answer to this question. George stated that we have an obligation to make a difference in the world. That answer came with a quick, “but some people have more opportunities to make a difference in the world than others”. I found this to be an interesting statement that I did not think too much about until writing this reflection. It encouraged me to think if this is a true statement or not.

Being concerned about George’s response, I asked the group if they volunteer anywhere. Sadly, the answers were not what I wanted to hear. Volunteering is something that I hold close to my heart, and I continue to volunteer even when my schedule is busy. Giving back to people in need is something that if everyone did it, there would be no person in need. So even though I agree with George that we all have an obligation to make a difference in the world, I do not think we all have different opportunities to do so. Any good difference one can make is a difference made. I encouraged them to go and volunteer their time. Most of them are retired and abled to help people in need. A few days after the dinner, my dad told me that Ellen and George texted him and told him that the conversation we had made them think of how to help others. Being involved in one’s community can help broaden one’s view on others.

If we begin to open our minds and listen to others equally, a lot of conflict can be avoided. Selfishness and ignorance is at the root of many conflicts. This is similar to one central idea of HON 251, which is how do we communicate well with others. I am a strong believer that serving others is the best way to understand other people’s hardships and meet people you otherwise wouldn’t meet. By actively learning about other people’s viewpoints and experiences, one can begin to have high quality communication skills. Better communication can also lead to addressing shared problems as well as having more say over our lives, which are the other two central ideas of HON 251.

I can relate this particular topic of serving others to Jane Addams’ writing called “The Snare of Preparation”. Addams discusses how she spent most of her time planning on helping others and the details of it. She spent most of the time preparing to help instead of acting. Addams realizes at one point when walking down the street that the problem of poverty is all around her, yet she has not done anything to help it. The people attending my KKT seemed to be in the same slump that Addams was in. They are all passionate about social issues and getting involved with associations, yet they have not put forth any action to do so.

When asked, “what does being a citizen mean to you (other than voting)”, I received some interesting responses. Our discussion before this question had an impact on their answers as one response was to serve and help others. Another response was that citizens need to try and protect the environment we are in. We never got into environmental issues, but I liked this response. I think you could make a valid argument that protecting the environment for future citizens is an important role of being a citizen. Another response was getting more involved with local politics and making your voice heard by writing letters to the government. I encouraged them to make their voices heard because the government can’t make high quality decisions on wicked problems without hearing other people’s experiences and viewpoints. Research and facts can help with wicked problems, but personal experiences can help figure out better possible ‘solutions’ for wicked problems. I hope that this KKT has encouraged them to voice their opinions and get involved.

An interesting conclusion made at the KKT was that no one eats dinner around a kitchen table anymore. Everyone (except for me) grew up eating around the dinner table as a family. When they were growing up, it was a different time without many of the distractions that we have today. I grew up eating dinner on a tv tray watching TV, and I hardly ever ate at the dinner table. Everyone else said that now they only eat at the kitchen table when there is company over. It seems like in our everyday life, we have strayed from having face to face conversations. Many do not seem to have the unique, enlightening conversations with other people in this modern world. The American culture has shifted more and more towards individualism. We tend to pay attention to only what our opinions are and ignore the opposing side. This causes a polarization that is hard to reverse. This polarization is what is making it hard to communicate well with others. Not listening or understanding other peoples’ viewpoints makes it hard for a democracy to exist.

In conclusion, I have been encouraging my dad to keep in contact with his siblings more than he is used to. I think making him invite his siblings to this KKT made him realize how enjoyable talking to one another is. I enjoyed hosting a KKT and hope to host similar dinners with family and friends in the future. I think hosting this KKT has made an impact on a few of my family members and myself. Conversation is a powerful tool that is going obsolete in a world of technology. Hopefully, I can encourage people to put down the electronics (not just during meal times) and have enlightened conversations. 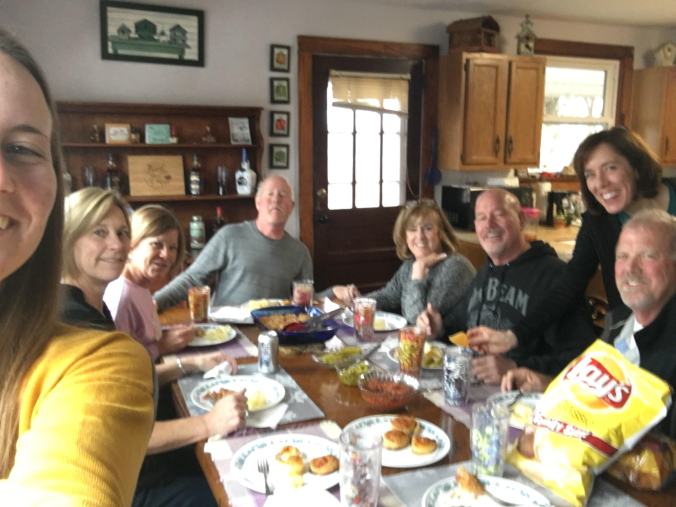