I hosted my Kentucky Kitchen Table in my hometown of Bowling Green. I was lucky enough to manage to pull together a ragtag dinner group consisting of some distant cousins that I don’t remember being related to, an uncle, my dad, and the lawyer in charge of my grandads estate. Most of these poor souls just wanted to come to my grandparents house for a meeting and to sign some documents but had the misfortune of mentioning dinner and me deciding that my project was way more important than their ability to evacuate. We pulled together an oddly good meal consisting of ribs and chicken that where both of the farm fresh variety (slaughtered and put in a deep freeze till the grandkids forget it had a name) along with homemade cornbread, baked beans, and lemonade as a group (minus Pete who would rather watch football and left the kitchen). We decided to eat at the dining table in the sunroom surrounded by our prickly cacti friends and settled in for a good long meal.

The captives of the evening were my uncle Pete, my dad Paul, distant cousins Taylor, Terrah, and Graham (no that’s not a typo, my last name is Graham and his first name is Graham) and lawyer extraordinaire Tracy. While the group may not look that diverse on the outside we represent a wide demographic of ages, backgrounds, and belief systems. Pete who has lived a rough life and at 40 looks closer to 65 never went to college and now has seizures so he can no longer work on power lines like he used to so he’s been forced into retirement. My dad went to Western and then vet school and is now a veterinarian/farmer/archery coach. Taylor went to Louisville for college and now has a full time job there where she coordinates fundraisers. Graham was a professional archer from 18-23 but lost most his most of his vision in his dominant eye in a gun explosion and is now a welder. Terrah is a nurse and extremely religious (to the point she sent me a bible in the mail less than a week after this dinner/first meeting). Last but not least Tracy who has a law degree but decides to use it to do everything a lawyer does minus going into an actual courtroom and has 2 jack russell terriers that get stuck in groundhog holes.

As I started off the discussion I attempted to make it clear that this project is about insightful discussion and not starting brawls at the dinner table and thankfully everyone seemed to grasp the concept except for Pete who immediately started laughing about “those butthurt liberals” and immediately killed most of my hope for this to end with no hurt feeling and open minds. Once Pete got it together we started in on what citizenship means to each of us and we unsurprisingly ended up split up in our beliefs by age group with Taylor and I speaking more about being a part of a society who accepts you, Terrah and Graham talking more on their freedoms and their rights and how you are a citizen when your country let’s you be your own person while still protecting protects you and providing guidance almost like a parent would do, and Pete, Paul, and Tracy made their beliefs known that citizenship to them means feeling safe, loving your country and being willing to do anything in its name because it is your home. Luckily we all agreed on something, some people in the group brought up that no matter the background of a person, if they truly feel like an American and are only here with good intentions that they should be treated like citizens and not outcasts at least by the public. I was truly surprised that Pete agreed and I feel that he probably likes the idea of a utopian society but wouldn’t truly practice this due to the fact that I’ve heard one too many jokes about muslims come out of his mouth over the years but I guess he gets the benefit of the doubt for now.

After this I directed the conversation towards what kind of person everyone wants to be and what they do to try to become this ideal. All of the men ended up described their ideal way of being as being caring, friendly, useful people, and being able to protect their loved ones which reminded me of the paper we read on younger people not being able to really discuss morals because they were never taught any. This situation was kind of reversed from the article where I felt like the men weren’t taught how to truly express themselves but had words put in their mouths to spew out whenever they are told to. The guys had this preconceived notion of what a real man is from hearing it their whole lives and it was honestly disappointing to get such a generic answer. I do however feel that if any one of my younger male friends had been there he would have felt much more comfortable opening up. The ladies of the group however were not afraid to speak their minds and get into specifics. They brought to the table a collective desire to be able to give more of their time to their families and spend less time caught up in themselves. Terrah brought up her desire to be able to be there for everyone and that if anyone of her friends from church or otherwise ever needed anything at all that she could be there in a split second to do anything for them because not enough people take the time to care about others.

This lead into a discussion of religion and Terrah’s various mission trips. Out of all of us I was the only person who wasn’t a practicing christian which lead to a few overzealous minutes of preaching by Terrah but eventually managed to get turned back around to the relative zone of living better together. Everyone agreed that religion is a moral code and that not practicing one doesn’t make someone a bad person, it just means that they have to make their own limits and define good and bad for themselves. Graham brought up that community service is one of the best things a church does as it allows people to actually get together and make a difference and due to the sense of community and obligation to their group people tend to make more of an effort to help. Terrah brought up that the last 2 mission trips her church planned kept getting put off due to the snare of preparation and ended up happening 5 months after the originally scheduled dates. She shared that she;s not going on another trip as she believes they accomplished nothing because they brought shoes, toys, and toothpaste to an area that had way more pressing issues such as disease and how to get water than worrying about brushing their teeth. Taylor also brought up that on a mission trip that she went on where the kids got toothpaste that was mint flavored that the kids would end up eating the toothpaste like it’s candy and get ill because they had never seen it before. The article to hell with good intentions really hit home here and made me realize that the human race is basically just wandering around with its hands over its eyes convinced it is a gift from god bestowing greatness wherever it may go refusing to look at the reality that it’s poisoning everything it touches. After this the discussion took a quick turn to the official reason for everyone’s visit to Bowling Green and the discussion was promptly left at the table.

This project was surprisingly more comfortable than I had originally expected especially considering that half my group where stranger to me. After doing this project I have to believe that most people are inherently good and have good intentions but don’t necessarily know how to properly execute them. Since I know Pete as usually being very brash and his relatively cooperative and accepting attitude I must imagine that being taken out of your comfort zone and the preconceived notions of those closest to you gives you time to reflect and process what your beliefs as an individual are without the hive mind. This has also helped me realize how different we can be on the surface but the our souls share a like mind of love and acceptance. 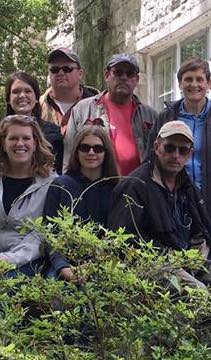