My Kentucky Kitchen table was hosted at my parent’s house in Mount Hermon, KY. Those attending were my father, my mother, my sister, John, and myself. My father, Craig, has lived in Mount Hermon his entire life. He is a third-generation farmer, a volunteer firefighter, and a carpenter. My mother, Christy, is originally from Indianapolis and moved here with her family while she was a child. She lived in Vernon, KY until she and my father married in 1992. She is the center coordinator at the Barren County Health Department. My sister, Maddie, is a senior in high school. She serves as secretary in her high school’s FFA chapter and plans to pursue a degree in agriculture at WKU. John is from a small area called Hestand, KY. He works in carpentry with my dad and this was his first time meeting the rest of our family. My mom, sister, and I decided to cook the entire meal consisting of roast, mashed potatoes, green beans, rolls, and gravy. John provided the sweet tea for the meal.

Although this group of people did not seem very diverse, we discovered diversity in our experiences, regions, political identities, and religious identities. My family is a stable, two-parent household while we learned that John comes from a family with divorced parents. His parents separated as he was beginning high school in 2007, his father passed away just last year, his older brother joined the air force and now lives in North Dakota, and he has some contact with his mother who lives in northern Kentucky. Another difference noted during our conversation was that we were used to homecooked meals gathered around the kitchen table every night while both of John’s parents seldom cooked. We were also diverse in the regions we originated from, with my mother most notably originating from Indiana, while the rest of us originate from different, small, rural neighborhoods in Kentucky. We also differed in our political identities. John identifies as a democrat while my family and myself identify as republican. This difference brought a unique conversation to the table as we discussed why everyone identified as they did. John believed more in the democratic platform than the republican platform, even though he was still on the fence regarding abortion because of his religious beliefs while my family and I were extremely conservative. This prompted us to talk about the results of the recent election and how we felt about the president-elect. John was quick to say that he did not vote for Trump, but was willing to give him the benefit of the doubt as his post-election speeches and mannerisms were more acceptable as opposed to his pre-election actions. He also clarified that he was by no means a Hillary Clinton fan either, but decided to vote for her as he believed that she was more qualified than Trump because of her experience. My family and I admitted to being Trump supporters and were glad when we received the news that he had won. All of us talked about the shock that we all had when Trump won the election, as none of us believed that he would win. Additionally, we were different in relation to our religious beliefs. Although we all were in the broad spectrum that is Christianity, John identifies with the Baptist denomination while my family and I identify as Church of Christ. This prompted a discussion that identified some differences between the two: primarily, the “once saved, always saved” concept and the idea of being saved before baptism. Other than these two differences, we noted that they were very similar in their other teachings.

After these initial, introductory conversations ended, I began to prompt with discussion-based questions. First, the question, “What does citizenship mean to you?” was asked. After initial silence, John began the conversation and stated that he believed an important component of citizenship was being understanding and respectful of others. He continuously mentioned that, although we may come from entirely different backgrounds and have different morals/beliefs, we must be respectful of everyone’s right to think and act differently and be both understanding and welcoming of those differences. We all agreed and my dad continued by stating that he also believes providing helping hands to those around you was an important function of citizenship. He related this to firefighting: he volunteers his time to help others in the community and explains that there are multiple ways to do this, such as helping your neighbors landscape or something as simple as a phone call to see how someone is doing. The next prompted question was “What is the thing you love most about living where you do?”. My sister jumped in by sharing that she loved how close-knit our little community was. If someone was sick, then we all knew about it and contributed in whatever way we could. If someone was faced with a disaster, then everyone contributed. Living in such a small, close-knit community made it seem more like a large family. My mom also mentioned that she never had to worry about the neighbors or having too much traffic around the house, especially while we were growing up. If she and dad were both at work, then she could easily find a babysitter with a neighbor. She also mentioned that she never worried about us wandering around alone because she knew every neighbor and the traffic around the area was minimal.

The conversation throughout the entire dinner flowed very smoothly between these multiple topics as we were all very open to the discussion, even during touchy subjects like politics and religion, and required very minimal “conversation starter” questions. Thus, I learned that diversity exists even when you least expect it to and I learned key components of citizenship and democracy. We discussed various topics evenly and openly, regardless of our differing backgrounds and identities, much like how a true democracy should function. Our conversations more accurately represented a proper deliberation, in the sense that we each spoke of our differences, compared them, and then brought our ideas and beliefs together once everyone had spoken. All in all, it was a very beneficial dinner that resulted in new ideas of citizenship as it relates to democracy and a better understanding of how experience is epistemologically significant. 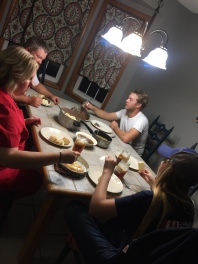 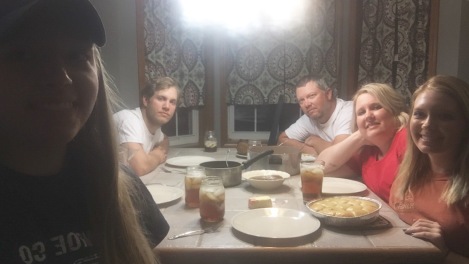