When we first got assigned this project, I was immediately stressed out! I rarely go home because it is such a long distance, but I decided this project would make for a good excuse to travel the distance and plus I would get to meet up with old friends and make new ones. I texted my mom and told her we had to host a dinner for my friends for a class project. She was ecstatic; she lives for opportunities to host my friends (and listen to all the gossip). I invited friends who lived nearby and went to the University of Cincinnati and Northern Kentucky University and told them each to bring a friend they had made in college. The table would consist of seven college students, which doesn’t necessarily sound diverse, but after having mature conversations it turned out to be. 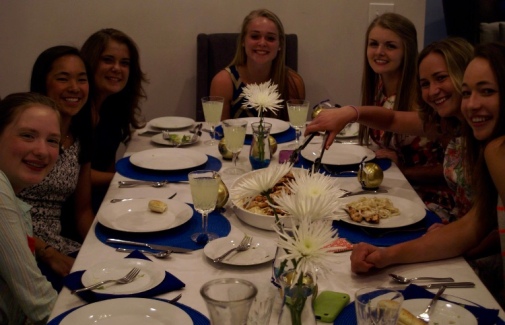 Sarah, Lacey, Lauren, and Meredith all grew up with me and were who I considered my best friends. Before we left for college my friends and I were all fairly similar: white, middle class, Republican. We all grew up in the same area: Fort Thomas, Kentucky (a suburb of Cincinnati), and attended the top rated achieving public high school, Highlands High School. Our parents all supported us in everything we did; they came to our sporting events, volunteered at school, and supported us financially.  As we went off to college we all grew somewhat distant of each other and came back home with completely different perspectives on all sorts of things.

Mia, a friend of Sarah’s who attended the University of Cincinnati, had grown up in a small town outside of Columbus, Ohio. She was very Christian and had ambitious goals of becoming a missionary. She brought such diversity to the table by sharing her experiences of when she traveled to Haiti and Ecuador to help educate young kids in third world countries. I personally had never really believed in missionary work and had a viewpoint similar to Ivan Illich in his essay we read in class “To Hell with Good Intentions.” I had never sought out stories of missionaries to change my mind, but hearing her story did change my perspective. It was truly incredible to see pictures of her in these places and inspiring to know that one person can make such a big impact where it is really needed.

Brooke, a friend of Lauren’s who attended Northern Kentucky University, was very shy! She grew up in Florence, Kentucky with not a lot of money, divorced parents, and four other siblings. She was surprised at how nice the dining room table was set and all the effort that was put into this dinner because growing up, she did not eat around a table with her family. It was always fending for yourself at her household. With having so many siblings and divorced parents, she talked about it being hard to find time to spend with her parents.

I knew for this project to be successful, the conversation needed to be more than surface level drama. With Trump just being elected President, I asked everyone how they felt about it. Just by this one question I learned a lot about everyone at the table and the things they believed in and stood for. Sarah, who used to have mostly Republican views, had suddenly very Democratic views. Lacey, who used to not stand for LGBT rights, had become surprisingly accepting. Lauren was very fond of Trump because of the way he prioritized jobs as she was looking further into her future. Meredith was kind of lost in the whole conversation as she does not like to affiliate with any sort of politics. Mia spoke very strongly on behalf of Hilary Clinton because of the opportunistic ideas she had about spreading democracy and helping third world countries. And Brooke had always had a very Democratic stance on things since her family was on public assistance while she was growing up and her view on government was very thankful for the opportunities it provided her family. It was crazy to see how everyone’s viewpoints were changing as we moved off on our own and did not just follow what our parents told us. Lacey even mentioned that she went to college and felt like she had been living in full ignorance inside the “Fort Thomas Bubble” and it wasn’t until she experienced everyday life on her own that she was able to learn what she believed in.

When I asked the question “beyond voting, paying taxes, and following laws, what does citizenship mean to you?” everyone had something to say, but the one that stuck out the most was Mia’s when she said “citizenship means that you are a part of something bigger than yourself. Its knowing that you are doing your duty to do what’s best for your country and in return, hopefully, the government will do the same for us.” I thought this was the strongest answer because a lot of what we learned in Honors 251 can be tied into this definition. In order for us to be productive citizens we have a duty to share our knowledge throughout government. In order to make changes to things we do not like, we have the responsibility to make it better and speak up for what we believe in. Really, being a productive citizen, we can begin to answer the three main problems this class brings to fruition: How do we live better together? How do we solve problems? How can people have more say over their lives? This class has been so helpful in making me realize that it is up to me to make a difference.

It’s fascinating to me to see all of us growing up. I’m really glad I got to meet new people in the process, too. They brought a whole different perspective to the dining room table and talked about things the rest of us had never been exposed to. They will be people that I definitely see myself hanging out with again when I come home. It was also refreshing to hear stories that were encouraging. What I thought would be a miserable project was actually one of my best memories with my friends.