Brooke and I held our Kentucky Kitchen Table project at a house here in Bowling Green, Kentucky. A sorority sister of Brooke’s opened her home to us and her mother agreed as long as everyone supplied a dish for the meal. I contributed by making the macaroni and cheese that can be seen to the right of the picture. Brooke made the shredded steak and banana pepper mix. Three of my sorority sisters (Alpha Omicron Pi’s) brought a vegetable and cheese plate and three of Brooke’s sorority sisters (Kappa Delta’s) brought rolls and cheese slices. The mother of the home also chipped in by making pumpkin cheesecake brownies that we were able to enjoy after dinner. You can see all of the food and most of the people in the photos below (the brownies were still baking). 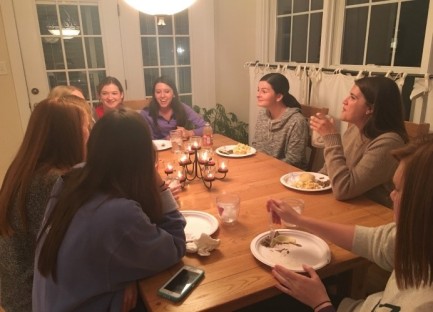 Brooke and I both (as noted above) had invited three women from each of our sororities to the dinner. Along with our sorority sisters, the mom of the house and her youngest daughter were in accompaniment as well, Kelli and Allison. Kelli is the mom of Brooke’s sorority sister, Caroline. She is a middle-aged woman and is a pharmacist here in Bowling Green. Kelli is an alumna of WKU. Through speaking with Kelli we learned that she is a Christian woman and doesn’t claim a particular denomination. Kelli is a registered Democrat and grew up in Harlan County. In further discussion about Harlan, we learned that it’s a poor area in Eastern Kentucky and growing up in this area she was from a family with little means. Kelli was a first generation college student. Kelli’s youngest daughter Allison is currently a junior in High School. She has grown up in a middle class family in Bowling Green, Kentucky. We questioned Allison about her political views, but she is too young to register and hasn’t quite made up her mind yet on which political party she sides more with. When discussing her faith, she explained that she is still discovering her faith and wishes to explore different denominations once she comes to college. Allison is undecided on what major she will choose when coming to college and has yet to decide where she would like to attend. Having a younger perspective, especially one from a very unbiased party was a nice addition to the conversation and at times helped us all see the issues we were discussing from a, sort of, birds eye view.

The three sorority women I invited were a few of my sorority sisters that Brooke hadn’t met before, Brittany, Sarah, and Haleigh. Brittany is a senior here at WKU and is from Versailles, Kentucky and is majoring in social work. Brittany says that she would describe her socioeconomic status as upper class. When asked she said that she identifies with the Republican Party and is Southern Baptist.

Sarah is a junior at WKU and is from Franklin, Kentucky. Sarah is majoring in elementary education and describes her socioeconomic status as lower-middle class. She identifies as a member of the Democratic Party and is a nondenominational Christian.

Haleigh is a senior at WKU and is from Glasgow, Kentucky. Haleigh states that her family is upper class. Haleigh is in the process of applying to law schools. She identifies with the Republican Party and is a member of the Church of Christ.

Brooke’s guests were some of her sorority sisters that I had never met before, the Kelli’s oldest daughter, Caroline, along with Christa, and Madison. Caroline is a junior at WKU. Caroline is working on a double major in biology and psychology with a pre-physician’s assistant concentration. Caroline is a member of the Honors college here at WKU. When asked, Caroline explained that she identifies as having independent political beliefs. She said that she has liberal social beliefs, but conservative beliefs regarding government policies. She grew up in the same family as Allison, a middle class family in Bowling Green, Kentucky. Caroline identifies as a Christian and seems to fit in best with the Presbyterian denomination.

Christa is a freshman and is also in the Honors college at WKU. Christa is working on a major in biology and is from Louisville, Kentucky. When asked Christa describes her family as upper class and says she is a devout Catholic as well as very conservative. She is a registered Republican.

Madison is a sophomore and a member of the Honors college at WKU as well. Madison is majoring in finance as well as accounting. Madison grew up in Northern Kentucky and describes her family as lower class. Her residual check from the university is the means she uses in order to pay for her sorority dues. Madison identifies with the Democratic Party and describes herself as spiritual rather than religious.

Overall, there was a decent amount of diversity at our table. As you can see from above, the political parties were split about half and half between the Republican party and the Democratic party. Plus, we had the generational diversity which gave us a nice range from the host, someone who had been around and seen different things then the college students at the table did, as well as having a younger viewpoint with the host’s daughter. I truly enjoyed having the different generations represented at dinner because the generation diversity gave a different take on every aspect of the conversation. In regards to diversity of religion, most of our group were Christians, however there was diversity in the denominations that everyone associated themselves with which allowed for some diversity in conversation.

The dinner went very smoothly for the most part. I think this was in large part due to the way Brooke and I approached the dinner. Brooke and I began the dinner by explaining the purpose of the project and set the tone for the dinner by laying out some guidelines. There were three guidelines: 1. We would all remain respectful of others’ opinions and beliefs, 2. No one would be required to share if they felt in any way uncomfortable doing so, and 3. Brooke and I reserved the right to change the topic of conversation if we felt that the conversation was deteriorating and was no longer productive. Throughout the dinner the guidelines never had to be referenced, however I think they set the tone for the dinner and helped all of us stay on track with our discussions.

Our opening question for the dinner was, “Beyond voting, paying taxes, and following laws, what does citizenship mean to you?” After a few minutes of thinking discussion began. The participants at the table were all in agreement that a good citizen is one who goes through their everyday duties, but always goes that one step further. A good citizen is the one who truly takes an interest in their neighbors as people and plays a role in helping them and the community however they can. I then asked the question, why do we all think that this is how a good citizen should act? It seemed unanimous that the women in the room were stemming their answers from their Christian roots. They were all thinking in the aspect of living for Christ. From there, Brooke questioned the group about the extension of the radius of support they were discussing in regards to the good citizen. Who in the group seemed to view it more locally and who viewed it more globally? The women who lived in cities, Christa and Allison, seemed to think of themselves as more global citizens and when asked couldn’t tell us much about their neighbors, however, Madison and Haleigh who were from more rural areas knew a lot about their neighbors and had developed those personal connections and saw themselves as more local citizens. Sarah, was the outlier, being from Franklin we would have assumed she may see herself as more of a local citizen, but when asked she described herself as a global citizen and said she attributed this to her mission work that she had done in Haiti. Spending time in Haiti changed Sarah’s viewpoints on citizenship and she thinks that we should help where we can whenever we can. Sarah brought a different aspect to the table with her experience abroad and I think everyone enjoyed hearing her perspective.

The next hot topic of our discussion was the presidential election. Our dinner was hosted the week prior to elections and it seemed that everyone was slightly more edgy about this topic. We had a multitude of varying viewpoints in the room which gave us an in-depth debate, however, Brooke and I steered the conversation towards what each person in the room wanted America to be and who of the candidates in the running could achieve those desires. Caroline began this discussion and explained that she saw an America that had expanded rights for all citizens, no matter the race, sexual orientation, etc. Christa took her turn after Caroline and described her America as extremely conservative. After discussing for a bit it was clear that we were not going to be able to come to an agreement about which candidate could give America what it needed nor could we agree on what exactly it was we thought America should look like. Many questions were then posed such as, how can we make America better when a better America looks different for each of us? If this is how divided a group of ten of us are, imagine how divided this country is. Is our country ever going to be united? Is the division of our country going to get worse every year? How will that effect coming elections? Kelli shared her experience over the years and explained that there had been awful elections in the past and yet, we were still standing. This made us all feel a little better and then sent us into a topic of discussion about the media and how this election may just seem worse than others due to the medias involvement. One conversation led to another and soon enough I realized we had been discussing different topics for almost two hours and we all decided it was about time to head home.

Through this project I learned how important it is to be open-minded and to not judge a book by its cover, or even its overview. The women in this house looked similar to me, and had similar religious beliefs, and most went to the same school and were also in sororities, however, not one of these women had the exact same viewpoints as me. We all varied in ideals and what we thought was best, but we all listened and respected one another’s opinions. We all practiced being open-minded. This dinner and these conversations gave me an insight on what deliberation can achieve when done right. In the atmosphere we all created, everyone’s voice could be heard and was honestly considered. In Melville’s, “How We Talk Matters,” a reading for our class, he states, “Talk is the essential ingredient of politics. It not only shapes decisions, it shapes us – our thinking, and our understanding of ourselves and others, our way of dealing with conflict and differences.” What Melville is saying here is exactly what we put into practice at this dinner. Talking is a way of understanding one another and a way of figuring out our differences. I think that if our country was able to talk the way Melville describes talking, then maybe, just maybe America could get on the right track. This project was very enjoyable and I truly learned so much about myself and the new friends I made at our dinner. I hope that I can continue my life practicing the art of talking and actively listening that was shown to me during our discussions at our Kentucky Kitchen Table and within this class.