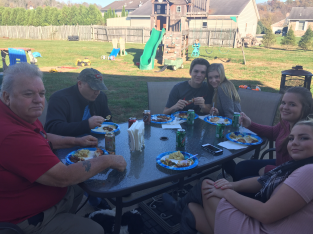 I originally intended for my Kentucky Kitchen Table to be located in my grandmother’s dining room at her home in Southern Indiana, but it was such a nice day that I cannot blame everyone for wanting to sit outside! So we sat out on my grandmother’s patio and had dinner and conversation. My first guests included my grandmother Sharon and grandfather Omar, both of whom grew up in poverty. My grandfather lived in a shack with no running water, and my grandmother and her 11 siblings moved constantly from tiny rental to tiny rental. They overcame the cycle of poverty together and now live a very comfortable life. My next guests were my parents. My father Steve is a veteran and my mother Shonda was his wife while he served. They are both middle class and live comfortably. After that were both of my siblings, both of whom brought a friend I had not met. My brother Steven brought his girlfriend Ava, both of whom are sophomores in high school, and my sister Alexia brought her friend Kalie and my sister is a senior and her friend is a junior in high school. My grandmother invited my Great Aunt Fran whom I see very little, as well as my cousin Jackie and her boyfriend Matt and his children Jade and Logan whom I had not met. My Great Aunt Fran has seen poverty and divorce and still struggles financially because she has a physical disability that hinders her from working. My cousin and her boyfriend work paycheck to paycheck. I had four more guests who are not pictured, which were my Aunt Teresa and Uncle Jerry and their two grandchildren, who have an Indian father. Their father Ben and mother Crystal, my cousins, wanted to come but they were in India on vacation! My guests differed greatly in their socioeconomic class, their age, political identity, and a little bit in ethnicity. Many were related to me, but I was sure to choose relatives I rarely see and who were diverse in opinion, as well as to mix in guests I had never met.

For our food we had a barbecue. Because several of my guests struggle financially, and because my grandmother lives to entertain, she provided all the food. The dinner just so happened to be two days before the presidential election, which really highlighted the diversity of opinion. We started out with everyone being able to say that they had at least some family dinners with their families as children. Everyone wanted to live in a community that was inclusive and economically prosperous, but they all differed in how to get there. One of the clearest things was the diversity of thought between age groups. For example, my grandmother and grandfather view citizenship very personally. My grandmother worries about her family, keeps her home beautiful, and speaks to her neighbors, but does not have a strong sense of civic duty. My sister Alexia on the other hand, views citizenship as an act. For example, she talked about her opinions on the presidential election and the canvassing she was doing for her candidate. She has less of a burden for her own family and more of a burden for voting for the right political candidates to fix societal issues. With the presidential election so close, we talked about a lot of social issues and I worked really hard to keep the conversation from getting too heated, as I had the far right, far left, and moderates represented. Using the bridge metaphor, we could not agree on where we were as citizens or a nation, where we wanted to be, or how to get there because of social issues like abortion and transgender bathrooms that polarized us.  We could agree on small things, like playing our part to alleviate poverty and ensure that we have clean air in the future. With all the polarization at my table, I felt like it related to our reading about Morgellons where the author did not necessarily believe those that had Morgellons but empathized with them and tried to understand them. I spent my dinner observing and learning and empathizing with different opinions.

The whole time I was trying to figure out how we could live better together. With people from all different walks of life represented at my table, how do we mix this diversity in a way that everyone has more say over their own lives? I arrived at the answer of empathy, not as an ultimate answer, but as a starting point. For example, my grandparents are aged in years and still have an issue with interracial marriage. They do not feel this is racism. I feel that it is, but I also know how their life experiences and upbringing have shaped them and I am able to empathize with them and try to understand their point of view. When my cousin Crystal married an Indian-American man named Ben that was hard for them, but they learned a lot when my cousin Crystal had Ben’s children and they fell in love with them. Their marriage and their children changed the whole dynamic of my family and empathy and patience with my grandparent’s opinions brought them where they are today.

Another example of how empathy helped us to live better together was throughout our political discussion. As much as I tried to keep the conversation on citizenship, with the election two days away much of the conversation revolved around policies of the candidates. My dinner became almost a deliberation, as I did my best to keep conversation respectful and thoughtful. We discussed policies and how we saw those policies affecting our nation and bettering or worsening out world. With the polarity of opinion, we did not reach any meaningful compromise, but we did practice speaking to each other. As we learned in our reading “How we Talk Matters”, this is an important concept. Talking is the first step to solving social issues, and even though we did not necessarily come to agreement on social issues, we learned to talk to one another and to empathize and keep one another’s life experiences in mind as we talk to one another. All in all, this was an enriching learning experience.