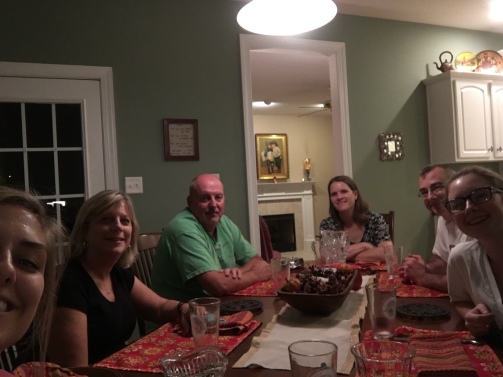 When I first heard of the Kentucky Kitchen Table project I was a little apprehensive. Growing up I was used to sitting around the dinner table for meals, but I was never provided with a list of questions to ask. Conversation flowed naturally without someone directing it. When reading through the handout I realized I was going to have to ask questions about citizenship and democracy and the people I was eating with were going to look back at me with blank stares. Thankfully, the dinner went the complete opposite way. The people I ate with were very intrigued and interested with what I was learning in class and they kept encouraging us to ask more questions

I ate with five people besides myself and it took place in Bowling Green, KY. First was Caroline, who on the surface may be seen as similar to me, but we are actually quite different in our beliefs. Caroline and I are in the Honors College together as well as the same sorority, but Caroline comes from a much larger city than me and has different political views as well. The next two people were my parents, Lee and Trent. My mom is very nurturing and accepting and works at a church where she is in charge of planning worship as well as visiting people in the hospital and nursing homes. My dad on the other hand holds much stronger opinions and doesn’t always know when to stop talking. He works in sales and is very good at persuading others. The last couple that joined us was Becky and Ed. Ed is a high school English teacher who is very passionate about what he does. He was also very interested in the conversations we were having and didn’t want the conversation to stop. Becky works in the business world and was much quieter than her husband throughout the night, but her motherly qualities were very apparent in all that she said. Everyone who came to the dinner was very interested in the topics discussed and they all had different and interesting takes on the subjects.

When we all sat down to dinner we were patiently awaiting Caroline. She arrived a couple minutes late and apologized about a hundred times before we actually dug in to our food. Caroline and I first began to explain why we had to talk about democracy and citizenship and we told everyone what this Honors 251 class was all about. After we got all of that out of the way we began to ask everyone some questions. We started with the question of what citizenship means to you. Almost everyone’s responses revolved around doing the right and kind thing. They also discussed the importance of accepting people who are different than you. This led to a discussion of Room in the Inn.

Room in the Inn is a homeless ministry that the church’s in Bowling Green implemented. My home church participates in this program, but through the conversation this night I learned a lot more about it. There was one man in particular that everyone talked about. His name was Ernest and he often stayed at church’s through the Room in the Inn program. I learned that people from my church had actually helped him get a job washing dishes at White Squirrel. He also has begun to earn more money and is currently trying to find somewhere he can afford to live. Everyone at the dinner said this was a perfect example of good citizenship being played out. Helping others, who may not have as much as you, is an easy way to be a good citizen to those around you.

We later asked everyone if they thought their job was serving a greater purpose. Almost immediately everyone gave their one-word answer. Ed, the high school teacher, discussed the question for a while. He believes that what he teaches his students can really impact them in their future. I agree with this whole-heartedly. I am planning on going into education and one of the main reasons is so that I can be a positive role model for kids and make an impact on their lives. He said exactly this and he believes that is what he does every day.

Another thing we talked about was the election. This dinner occurred before Donald Trump was the President Elect. When asked about what advice they would give to our nominees one thing really stuck out to me. Ed stated that he suggests that our nominees should act like statesmen not politicians. He said he wanted to vote for someone who was going to do the right thing for our nation without worrying about being reelected. Such a big problem in politics today is that there are so many people behind the scenes pulling strings that the people who hold office aren’t the ones with the power. They are being told what to do and are too worried about being reelected rather than trying to get legislation passed. Trent also gave the advice that they should know what they are talking about before they speak. This led to a discussion about how neither candidate really knows what they are talking about. Hillary may be the better communicator but she still makes mistakes, and it’s obvious that Trump is blatantly wrong with some of the facts he gives. Again at this time we were still in the middle of the election. I just hope that Trump takes the advice everyone gave him.

Another thing we talked about was social issues. This was where I thought the conversation may go south, but actually this was my favorite part of the night. I anticipated an uncomfortable talk about abortion or gun rights or LGBTQ rights. Thankfully Becky began with saying animal cruelty hit home for her. She just couldn’t believe that people could be so cruel to animals and live with themselves. We all pretty much agreed with this strongly and our conversation was successfully veered away from the dangerous cliff we could have fallen over.

At this point in the conversation Caroline and I pulled the wicked problem conversation on them and we started to discuss that. We were able to relate this to the class and we told them about the different wicked problems we had studied like poverty and education. They kept getting annoyed when we asked them if they had any solutions to homelessness because they realized there was no easy solution. They were very intrigued with the discussion of wicked problems because they finally had a name to use for all the problems that surround us.

Throughout the dinner we also discussed the best things about our world today. Lee talked about the advances in technology and medicine as well as how our world is “smaller”. Because of all the advances people across the world can be contacted with a click of a button. We also talked about how great of a town/city BG was. Caroline talked about how it was very different from Louisville, but she liked it a lot. Bowling Green has a small town feel while still having enough interesting things going. During this conversation I realized how important WKU was to our community. Without the university the city of Bowling Green would be nothing. It was interesting to hear everyone’s opinions of Bowling Green and what they liked and didn’t like about it.

Overall the night was filled with enriching conversation rather than the awkward pauses that I thought would ensue. Caroline and I got to enjoy a home-cooked meal and we even learned a thing or two. The awkward dinner turned into a cultivating Kentucky Kitchen Table.