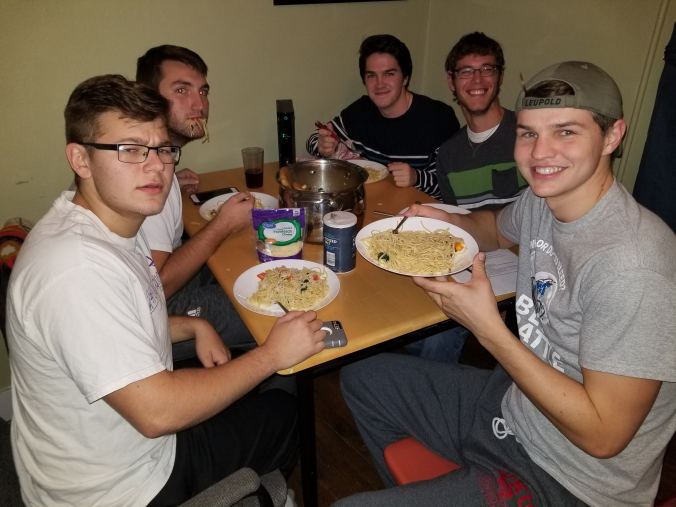 On November 10th, 2018, I did not have my Kentucky Kitchen table. I went on a trip to Gatlinburg and planned on doing the activity on the aforementioned day. However, I completely forgot to have the conversation and was left scrambling for a way to host the event somewhere in Bowling Green. I’m from Louisville and finding a venue to carry out the activity was going to be difficult. Needless to say, I was stressed. However, I have a group of friends who live here in Bowling Green in a house off campus and they were kind enough to let me host the event there on November 14, 2018. Those in attendance from left to right are Hunter, Hunter, Jackson, and Alex. For the sake of clarity, the second Hunter will be referred to as Ricketts. Hunter is a Freshman who is an amateur body builder and wishes to go into seminary after college. Ricketts is a WKU Junior with hopes of going into Med School to be a surgeon. He also works as an EMT in the Bowling Green area. Jackson is also a Freshman at Western who did Cheer and Gymnastics growing up and describes himself as a listener. And last but not least, Alex. Alex is a nontraditional student who has come back to Western finish the last semester to get his degree in creative writing. Jackson, the cook of the group, was nice enough to cook a stir-fried vegetables and pasta meal for my Kentucky Kitchen Table. I would like to point out that while my table had 5 people of extremely different backgrounds and beliefs, we were all men 18-21 years old. Therefore, there is lots of overlap in our thinking and a very possible bias. However, I believe that the night was mostly objective and still led to extremely productive and enlightening discussion. Anyways, to start off the night I asked the only required question; Beyond voting, paying taxes, and following laws, what does citizen ship mean to you? The general consensus right of the bat was freedom and patriotism. We talked about Patriotism and Freedom of the press and freedom to own guns and pursue life, liberty, and happiness for a couple of minutes. There was quite the “Merica” vibe to the conversation.  However, the group soon realized that we were talking about citizenship from the perspective of an American and only an American. From there, the conversation moved to a more universal sense of citizenship that was defined as abiding by a specific set of cores and values that your home country holds dear. In addition, we also saw citizenship as a way to identify with fellow citizens. Being in a citizen now gives everyone in that country a common identity. However, my favorite view on citizenship came from Hunter. He said that citizenship varies a lot for different people, but to him, citizenship was a sense of pride in one’s country and a desire to see it succeed and improve. We compared it to the marriage vows of in sickness and in health. No matter what state the country is in, you will stick around and do your best to improve it if you see citizenship as more than just birthright or words on a paper. We brought up an example that showed this divide between those who think that citizenship is just words versus representing something more. That example was the 2016 election. Many people threatened to leave the country if Donald Trump won the presidency. In the way that we defined real citizenship, those who threatened mutiny didn’t see citizenship as anything more than words on a paper. If they did, they would have stuck through a period of time that they disagreed with and done everything they could to make the best out of the situation.

From there, the conversation took a huge turn when someone brought up the Kavanaugh hearing. Regardless of whether or not one agrees with the appointment of Kavanaugh as a justice, we decided that him being found not guilty was a very important moment in today’s world. With the increased prevalence of the #metoo movement, many people lost sight of innocent until proven guilty and the importance of due process. It’s impossible to know the total truth behind Dr. Ford’s allegations, and it’s possible that the jury got the verdict wrong. However, it was important because with many of the alleged rape trials, defendants were often seen as guilty until proven innocent which is completely backwards to how the United States law system works. This isn’t to say that women shouldn’t be believed. However, it is still important that regardless of the situation due process is still carried out the defendant is considered innocent until proven guilty. From this conversation, we turned to rape culture and what can be done to combat the very real problem. We started the conversation by doing our best to define rape culture. What we came up with was that rape culture could be defined as a culture that largely ignores rape and attempts to treat the symptom of the culture -rapes- and not the actual disease which is the culture itself. Many people say that the way to treat said disease is to teach boys not to rape and rather than teaching girls not to get raped. While this may seem like a totally reasonable and simple solution and it probably works a little bit, we discussed how it might be harder to do than it seems. I asked the question “how many rapists premeditate a rape versus those who do it once in a lapse of thought. How many of those rapists lost consent after having had it and then just keep going?” Although none of us knew the actual spread between one-time rapists versus serial rapists, Ricketts used his background in the medical field to give us a real reason why people can sometimes “rape on accident.” He talked about how when someone is in a situation where things are getting “intense”, dopamine floods the brain which greatly suppresses the frontal lobe. The frontal lobe is what makes decisions and understands social norms as well as the part of the brain that would be taught not to rape someone. It is also a large part of what differentiates humans from other mammals. So, even if that man had been taught not to rape someone, if in the moment they lost consent, the rush of dopamine would suppress the frontal lobe making it much harder to realize that what they were doing was wrong because the frontal lobe is suppressed, and the more animalistic tendencies would come out. To be clear, we all acknowledged that rape is always a choice that the man makes, and it is always possible to say no. We were just discussing the medical reasons why it is harder to say no in that situation.  So rather than teach boys not to rape, we proposed teaching boys to stay out of situations where they might make a mistake. I proposed this idea because it was one that my mom always taught me. She must have realized that the standard “teach boys not to rape” wasn’t the best way to teach boys and that there was better advice to give. She always told me to never get drunk around girls because being drunk around drunk girls is the perfect recipe for accidental disaster. After sharing this idea, the group liked it a lot and agreed that parents should not only teach boys not to rape but should also teach them how to stay out of situations that would lead them to do something they would regret.  However, we conceded that this idea would only work for men who rape once “on accident” and not for the serial rapists. Sadly, we couldn’t come up with a solution to stop serial rapists other than teaching boys how to stop them. The discussion was wrapped up at this point because of our limited time frame. However, although our discussion was relatively short, I was extremely pleased with the result. We all learned that the issue of rape culture requires a much more complicated solution than simply teaching boys not to rape. However, we also learned that there is still a lot that we can do as individuals to help cut down on as many rapes as possible. This conversation was really interesting because of how well it related to the elephant versus the rider reading we discussed. In the reading, it talks a lot about how people make decisions with their emotions and not their reason. That reading perfectly describes the issue with trying to teach boys not to rape. You can teach to their reason/rider all day not to rape and they may listen and agree. But in the moment, that elephant takes over and the reason gets lost. It is for that reason that teaching boys to stay out of situations is so important. If men can know not to put themselves in bad situations and there is never the decision of, “do I keep going even though I lost consent” the amount of rapes could possibly decrease drastically. Sadly there is no guarantee that this approach will work any better than the other, if at all, but we decided that this would be the best way to approach an extremely difficult and important problem in our culture today.