I held my Kentucky Kitchen Table Project at my house in my hometown of Danville, Kentucky. Most of my family was at the dinner, including both of my parents, Kate and Matt, and one of my sisters, Elizabeth. My mother also invited a couple that lives in our neighborhood, Sid and Rebecca, to participate in the discussion. I gave everyone a copy of discussion points that I made based off of the given questions so that if we came to a dead-end in conversation, we could refer back to it. The dinner took place on Monday, November 12th and lasted a little over an hour, as we discussed major themes surrounding citizenship, community, and moving forward as a society.

My mom, who was the host of the dinner, is forty-six years old and a first-grade teacher at a nearby elementary school. She grew up in a military family, and as a result, has lived many different places around the world. For college, she attended the University of Kentucky where she met my father, and later settled down in Danville. My father is also from a military family and served in the United States Air Force before moving to Danville with my mom. He is forty-eight and currently works at primary care practice as a pediatrician. Both my mother and father were raised strictly Catholic, although my siblings and I were brought up more on the basis of choosing our own religious beliefs. My sister Elizabeth is a sophomore in high school and has a twin who was not present at the dinner. She has lived in Danville for most of her life. Sid is 57 and a retired Air Force general; because of this, he has lived in many different places around the world and currently is involved in work in Saudi Arabia. He has three daughters, all current students or graduates from college, and one grandson who is four years old. Rebecca has traveled with Sid to many different places around the world and also loves spending time with their children and grandson. Before living in Danville, Sid and Rebecca have been stationed in places such as Turkey, Saudi Arabia, and Germany. They also currently have a home on Lake Martin in Alabama.

After being prompted by the first question, “Beyond voting, paying taxes, and following laws, what does citizenship mean to you?” each person at the table shared some of their experiences, and how these have shaped their beliefs concerning our roles as citizens. There were three main ideas that came up during our discussion: education, participation, and societal roles.

With the recent elections in mind, one of the first topics that was brought up was the importance of voting. Rather than emphasizing the significance in voting itself, we discussed why citizens should educate themselves on candidates and political parties before heading out to the polls. My mom, as she has mentioned to me many times before, worries that many people in our community go out and vote without having researched the candidate’s beliefs and plans for if they were to be elected. Another point brought up was that citizens often simply vote for their political party, without taking into consideration the character and goals of each individual candidate. In the same way that we should educate ourselves in the area of politics, it is also important that we learn about our neighbors. Many communities are made up of a diverse group of people, and it is important that we understand each other. My mom brought up an event that we have in Danville, where an organization hosts a dinner, representatives of multiple countries cook their native foods, and the community comes together to learn about and celebrate its diversity. If we better understand our neighbors, we will be able to interact more cohesively, and in turn, be better equipped to solve shared problems.

This discussion reminded me of the reading, “Green Fire, the Still Point, and an Oak Grove,” which was about students who were advocating against an oak grove at their university being replaced by a football stadium. After a long description of the history of the oak grove and the university, the author emphasized the importance of being educated on an issue before fighting for it. I was reminded of this reading when we were discussing the duty of citizens to educate themselves before voting for a candidate. If we really want to make a difference in our communities, we should first take upon the responsibility of becoming informed and aware citizens beforehand.

The conversation of education led into the discussion of the significance of being an active participant and building relationships with others in your community. Not only should participation include obvious tasks such as voting, paying taxes, and following laws, but it also involves volunteering and being present at community activities such as the diversity dinner mentioned earlier. We discussed the need for more privileged citizens to step up and help those in a lesser financial, mental, or physical positions; this is the best way to see our communities progress. A couple ideas that we can implement in our town were volunteering at the local nursing home, working at a locally owned “pay what you can” restaurant, and participating in projects such as Soups on Us and Project Christmas Child. It is important for citizens to offer up their skills to help others in the community, for example, my mom mentioned how, before she got her current job, she volunteered at Jennie Rogers Elementary school. My mom is great with kids, so giving whatever extra time she had during the day to help out with elementary students made sense for her. Similarly, my dad volunteers for our high school football team as a team doctor, this makes sense for him. I talked about maybe over Christmas signing up to work at Grace Café, which is a local restaurant that offers food to everyone; if you are unable to pay, you simply work at the café to compensate for your meal. Aside from volunteering, we also discussed the importance in supporting fellow community members. In some places this may mean going out to a high school soccer game, participating in a summer festival, or shopping locally in order to support local businesses. Overall, it is important to actively participate in society, because if we all contribute and support each other, we are more likely to cooperate, and therefore progress further as a whole.

We also discussed another important responsibility of a citizen: finding your societal role. Everyone at my table is a part of a military family, because of this, we have all lived on a military base. One thing that is interesting about a military base is that everyone that lives there has a specific purpose; there is nobody that is unemployed or requires assistance from the government. This incorporates the idea of everyone having a role in society, and the importance of finding this role in order to contribute to your community. Whether this is being a teacher, a waitress, a coach, a manager, a doctor, a lawyer, or whatever other profession you may choose, you in some way benefit the community as a whole.

All of these big ideas tie into two of our class questions, “How do we live well together?” and “How do we solve shared problems?”  After having discussed citizenship for so long, I asked the table these questions and their opinions on how they relate to what we had discussed. In some ways, our conversation of what it means to be a citizen offers potential answers to these questions. How do we live well together?  Well, we can start by supporting each other, and giving back to our communities. If we are more active participants in our communities, we will build relationships with each other, and ultimately understand each other better. How can we expect to live well together when we do not understand and appreciate each other? How do we solve shared problems? Beginning in our own communities, helping those in need that are right in our hometowns would definitely help. And wouldn’t it be much easier to solve shared problems when we all have a better understanding and appreciation for our differences?

Through our discussion, I have learned what it really means to be a citizen. Citizens educate themselves, participate in their communities, appreciate their neighbors, offer help to those in need, and serve a purpose in their community. My biggest take away from this discussion was the responsibility of citizens to find their role in society. As a college student with an undeclared major, I often stress about what path I will decide on, and eventually what I will do for a living. The discussion we had at dinner allowed me to see my potential career paths in a different way: as my role that I will serve to my community; how I will contribute and give back to others. As I get older, it is important that I understand what it means to be a good citizen, in order to have a positive impact on not only the Bowling Green and WKU communities, but also on other communities I may become a part of after college. 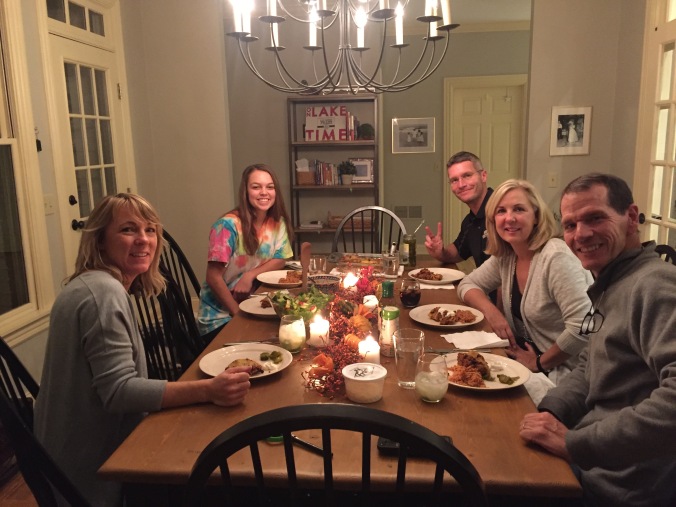