The meal for my Kentucky Kitchen Table project took place on the evening of Saturday, November 10th, 2018. I wanted to be able to host the dinner in my own home, but I live over an hour away and here on campus I just live in a dorm. Thankfully, my classmate Madeleine was nice enough to let me join her and another classmate at her home here in Bowling Green. Although I wish I had gotten to do the Kentucky Kitchen Table project in my own hometown with my own family, I still had a great time at the table surrounded by mostly strangers. I haven’t had a home cooked meal in weeks so the dinner was a much-needed break from all the processed fast food here on campus.

The meal took place around Madeleine’s dining table which seated two of my classmates Madeleine and Hope, as well as Madeleine’s parents Ron and Jennifer, her brother Luke and his friends Abby and Jason. The meal was prepared entirely by Ron and Jennifer and included homemade lasagna, garlic knots, fresh green beans, and a side salad. Not to mention that for dessert we had “Mud Pie”, which I had never even heard of before but was pleasantly surprised by. Despite the lack of physical diversity (as everyone gathered around the table was white and the age gap wasn’t terribly significant), we all brought something unique to the mix. For the most part, we all grew up living different lives and thus brought a wide variety of thoughts and opinions into the dinner.

Madeleine is one of my fellow classmates in Honors 251. Up until a few weeks prior to the meal, I had never spoken to her directly. Currently, she isn’t sure what direction to take in college with her major. She has a very high energy and contagious personality. When things would get stale at the table, Madeleine would always throw in humor and bring up the next topic to keep things running smoothly. She has grown up in this area so she knows the community well. It was interesting to hear about the community I will be calling home for the next couple years spoken about by someone my own age. Hope is also from my Honors 251 class. She is a Musical Theatre major from McCracken County. Like myself, Hope is also new to the area so it was nice to not be the only outsider at this dinner. She is incredibly good at formulating her complex thoughts into words that everyone at the table could understand and draw relation to. Ron, Madeleine’s dad, is a 53-year-old white male from Logan County, KY. He works with Western Kentucky University as a fundraiser for the Health Departments. He was a very well spoken man who put a lot of articulate thought and decision into every word he spoke. His comments were typically very thorough and resulted in others diving deeper into the conversation. Jennifer, Madeleine’s mom, is a 51-year-old white woman from Nebraska. She was very sweet and compassionate with all of her opinions and input. It was a rather interesting dynamic to watch a couple who had been together for years offer their different outlooks on matters. Often times, their given responses were similar. However on occasion, blatant differences in their thoughts sparked conversation between the two and in turn, the rest of the table. Luke and his friends Jason and Abby were quite similar for the most part. All three of them are Sophomores at Greenwood high school here in Bowling Green and are very knowledgeable of the real world for their age. Their younger age brought a different view on citizenship than the rest of us could bring to the table simply due to their differences in exposure to the surrounding environment. 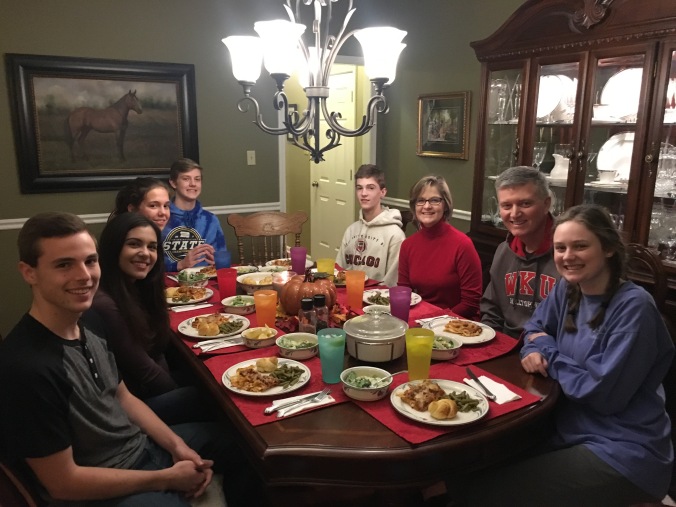 Before we started eating our meal, we explained what we had been learning a bout in the class and how it all relates to aspects of life we could experience daily. Madeleine, Hope, and I all shared information about our own group social issue project and asked each member at the table for their thoughts and inputs on the matter to improve our understanding of the topics even further. The overall consensus on Hope and Madeleine’s issue of “Trust in the Media” was that with the current relationship between the United States Government and the national media, it is safe to say that trust in the media has definitely been spiraling downwards. My issue of “Criminal Justice Reform” was rather complex and no final conclusions could really be drawn off the topic.
Once the eating commenced, we began by asking everyone at the table the question of “Beyond voting, paying taxes, and following laws, what does citizenship mean to you?” Everyone at the table generally agreed that being a “citizen” just meant to be active in the running of the world around you. To Luke, Jason and Abby, this meant being active in their school which is reflected by their participation in programs such as swim, theatre and academics. For the adults and college students at the table, citizenship involved taking part in the outside world through their established roles in society. Madeline, Hope and I are act as citizens through our participation in group meetings and education towards a greater purpose. Ron and Jennifer go about this action through a much more direct route. Jennifer told us of how she aided in the campaign of a local Senator by traveling around the area and spreading a good word.

What really stood out to me in the responses to this question was that a good portion of the answer depended on the community one was involved in. For Madeleine and Hope, social interaction and active participation as a citizen seemed to be much easier than it would be for myself or someone growing up where Madeleine’s parents did. The house that dinner was held in was in a neighborhood so getting involved with neighbors and pushing each other to be engaged in civil duties seems more feasible. However since I live on a farm, I have more cows within a 5 mile radius than neighbors. This means that going out and being active in local government and community is as an effort that many would not make. Such a geographical difference also skewed the answers to the many of the questions relating to neighbors as I do not have many. One would think that being a citizen would involve the same efforts and choices no matter the circumstances but our conversation really proved otherwise.

We also talked about how much power an individual can truly have in making social change. One of the strongest tools an individual can have in making change is simply education. So much of our lives are based solely on our own knowledge of our surroundings, leaving a considerably large emptiness created by a lack of knowledge about the rest of the world around us. This ignorance oftentimes leads to the complete dismissal of social issues to a large part of the population. Here, Ron used his white suburban family as an example. He claimed that due to their ignorance of the life of an inner-city kid’s life in somewhere like Chicago, his family could never fully comprehend the social injustices and life struggles that the child would undergo. For me, this really emphasized the importance of education on these social issues. We mentioned how due to the naturally busy lifestyles of most of us, especially college students, we oftentimes struggle to be truly aware of the issues outside of our educational bubble. The widespread lack of student voting in the recent state election was brought up as an example here. We all discussed how scarce the information about voting and registration was for college students to find. Not many people we knew were ever taught how to file for an absentee ballot so most students (myself included) went without voting. This general ignorance and lack of awareness seems to be what holds back a majority of society from being contributing citizens.

Overall, the dinner brought a wide variety of viewpoints and opinions to the table that I hadn’t looked at before. I think it displayed that being a citizen is much more than being someone who can check boxes during an election. A citizen is someone who makes connections with the world around them and make steps to better said world. But also that being a good citizen is not as easy as it seems. Being a good citizen is very dependent upon geography and education. The emphasis on education really reminded me of the “Oak Grove” reading in which the college students rallied to save an “oak grove” which was actually a man-made garden. Without the proper education on citizenship and the world around us, people can’t be expected to behave as proper citizens. Thus answering the central theme question of “How can people live better together?” The answer is to simply educate themselves so a fundamental basis of knowledge is established through everyone and we can all start to work together as citizens to better the world.