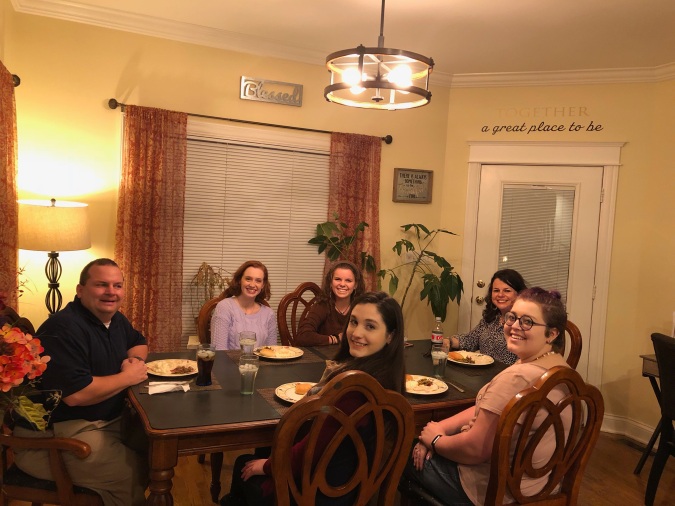 The conversation began with the required question: Beyond voting, paying taxes, and following laws, what does citizenship mean to you? Kelsey was the first to answer, saying that to her, citizenship is helping people around you and being kind. It involves lending help to others when they need it.  Laura said that citizenship to her was caring for each other and making a difference in people’s lives, to which Eliza added that it means going above what is expected and making an effort to help those that are struggling. Emily said that to her, citizenship is doing what we can to make our world a better place to live in through acts of service. Brian agreed, saying that citizenship to him was being an overall good person whois kind, caring, and generous. I added that citizenship to me relates to the central questions of the class, as it is about trying to live better with each other, helping to solve problems faced by society, and helping ourselves and others have as much say over our lives as possible.

The next question Kelsey brought up was: What do you think are the best things about our world today? Eliza said she liked how people in today’s world have a greater sense of community, or at least the people from her hometown. She then told a story of one of her best friends that had a rough family life. One night they were texting and she brought up how cold she was because her mom did not pay the bills and they had no heat. Eliza made her stay at her house that night, and she stayed for several days. Eliza said it was her first experience of a typical family life. Since then, her friends created a network of places she can stay at whenever she feels like. They give her a place to sleep, food to eat, and a sense of familial connection that she was lacking in all of her life. I added that I liked how far today’s world has come in the acceptance of other people’s differences despite still having a long way to go. While there is definitely still room for improvement when it comes to accepting all people, we have made big strides forward compared to even a decade ago. Emily liked how people today are kind to each other. She believes it is important to be that little bit of kindness in people’s lives because it can make a huge impact. Brian added that he liked how close-knit his community is and how they go out of their way to help each other out when needed. Kelsey chimed in that she likes how today’s world possesses faith and a hope for the future. She explained what she sees as the difference in faith and hope; faith to her is the belief in a higher power. She told us that she isa Christian and that it plays a large role in her life and the decisions she makes. To her, hope is assurance of the future or an expectation of how it will go. She believes that today, we have a hope for a better future and there are many people that are taking actions towards that expectation.

Kelsey then asked how we think our jobs/majors relate to our role as citizens. Kelsey was the first to answer, saying that her major was important to her role as a citizen because it involves helping others to be happier and more productive citizens. Eliza agreed, saying that her major also involves helping people better their mental health. She is very passionate about mental health and mental health awareness and wants to make a difference in people’s lives in that respect. Although she claimed to dislike science, so far she has been really enjoying all of her major-focused classes. Emily added in that her education major will contribute to educating the younger generation. She said that she has always loved English and Literature and knew this is what she wanted to study in college and have a career in. She told us about her old high school and how tough the curriculum was. Whenever she and her classmates would be having a difficult time, they could always confide in the teachers, and she wants to provide that for others in the future. When recently visiting her old school, she entered her old English classroom and immediately knew that is where she wanted to be. Laura answered next, telling us that her job as a school psychologist was all about improving the mental health of children in the community, which contributes to bettering the community both now and later. She then explained some of the hardships the children she works with go through, such as abuse and being aware of financial hardship.

The conversation then shifted to the privileges most of us have that we are unaware of and the hardships faced by a significant number of people even within our own community that we are, for the most part, oblivious to. The recent reading of “Seven Days of Heroin: This is What an Epidemic Looks Like” was brought up, and we briefly summarized it for Laura and Brian. Laura added that she works with many children that share a similar life, including a GAT student in the fourth grade who’s parent is in jail for drugs. He has started to have outbursts in class and can’t control his anger. We talked about how drug addiction not only affects the sufferer, but also the spouses, parents, children, siblings, family, and friends as well. Everyone agreed that the opioid epidemic is a huge issue, especially considering the number of deaths and overdoses recorded for the week were for only one city out of the entire country. The most shocking part of the reading to all of us was the mother who decided to recover when she found out she was pregnant. She was at a follow-up appointment for her baby, and they both seemed healthy and happy. However, only ten days after the appointment, the mother was dead from an overdose.  This only further validates the magnitude and urgency of the issue.

At one point, the conversation took a turn and Eliza somehow ended up discussing how she and her roommate bought hummus and pretzels, but they ran out of pretzels to eat the rest of the hummus with. In a perfect display of how to be a model citizen, Laura went to the pantry and came back with a bag of pretzels for Eliza, who was very grateful and happy.

My experience of attending a Kentucky Kitchen Table was nothing but positive. I got to know fellow classmates who, despite being very different, share many of the same interests as I do. The assignment related to what he have learned in Honors 251 because the questions asked could all be applied to the central questions and themes of the class, which are: How do we live better (or, at the least, less badly) together? How do we solve problems? How do we have more of a say over our lives? How do we help other have more of a say over their lives? We also mentioned topics pertaining to some of the readings from the class, such as the opioid epidemic readings and empathy readings. The conversation revolved around being a better citizen, which is the basis of the class. It was also great practice in deliberating, an important step in solving societal issues that we learned in class. I learned that sitting down with a group of people discussing things makes people more aware and open to other ideas, opinions, and experiences, even if they are conflicting. It proves that we could potentially make the world a much better place if more people took the time to listen and empathize with others. This assignment led me to a better understanding of what it means to be a model citizen.