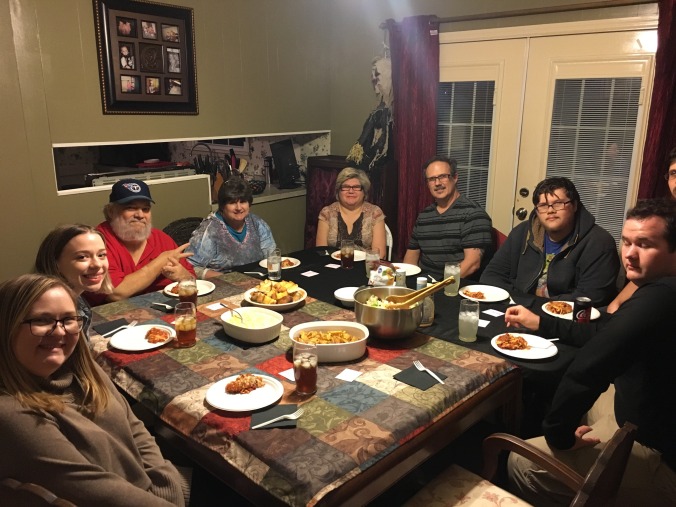 I hosted my Kentucky Kitchen Table Project in my hometown of Bowling Green on Friday, November 2nd, 2018. The dinner took place at my home around our dinner table. We had to put two tables together to accommodate everyone. I was able to partner with my classmate Megan for the assignment. In total, we had 8 guests come to my home, with a total of 10 people in attendance. Since Megan is a vegetarian, I made sure that everyone brought food she could eat. John and Renee brought lasagna and garlic bread; Beverly, Eddie, Spencer, and Dalton brought salad ingredients; Kim and Owen made cream cheese corn and brownies for dessert; Megan brought french fries; and I brought tea and lemonade for drinks.

Megan is a freshman at WKU who is from Nashville, Tennessee. She is majoring in English with a minor in photojournalism. John is a retired professor who once worked for WKU. John is diverse because of his age and because of his health problems. He is also from West Virginia, as is his wife Renee. He and his wife  met when they were in college at Marshall University in West Virginia. Renee is also a professor at the community college in Bowling Green. She spends most of her free time volunteering with SKyPAC in town. She also supported her daughter’s high school activities by volunteering on many boards at Bowling Green High School. Beverly and her husband Eddie brought both of their sons to the dinner, Spencer and Dalton. Beverly and Eddie both have a high school diploma. They met their senior year of high school in Louisville, Kentucky. They used to work in retail and ran a small business for many years. They now work at General Motors Assembly Plant in Bowling Green. Their son Dalton is a twice college dropout who works at Kroger. Spencer is currently enrolled at SKYCTC to study computer science and become a programer. Owen, who is my brother, is a high school graduate who works as a security guard for the General Motors Assembly Plant. He is currently enrolled in school to become a law enforcement officer, and he recently joined the National Guard. He is diverse because of his youth and his political affiliation as more right leaning. Kim, my mom, is a single mother of three who works as an operations planner at a factory called Essity that has international reach. She has also recently gone through many life changes including her first child going off to college and losing nearly one-hundred pounds in the past sixteen months.

As people were introducing themselves, one common theme came up among many of the guests and that was the importance of doing service in the Bowling Green community. Many of our guests thought this was something that made them have diverse experiences. I asked why doing service in our community was important and Beverly said “what if it were me who needed an extra hand?” Many guests echoed these thoughts. We should help our neighbors in times of need. That statement reminded me of the chapter in Love Thy Neighbor about the Bosnian civil war. During the war, people who grew up right next to each other started killing one another overnight. The story the chapter tells is strikingly antithetical to the conversation we were having around my kitchen table.  I am glad to know that people in my community do not share this survival of the fittest mentality expressed in the reading, and they are willing to give a helping hand. However, John believed that service was just a requirement of his job. It’s something he had to do for work, and it doesn’t extend further than that. At the same time, he would help those who are in desperate need of it, but he does not actively choose to serve the larger Bowling Green community outside of what is required of him.

We also discussed the health industry and hospital bills. John was a professor in health education at WKU so he was able to contribute a lot to the discussion of how payment works in hospitals. John has also suffered from several health issues for the past ten years, issues that actually caused him to go into retirement. Many of the guests complained of how expensive everything is in the healthcare industry. Eddie even made the comment that some industries are not designed to make a profit, such as hospitals and universities. As a society, we push the numbers too much. That also brought up a discussion about workers rights since many of our guests work in factories here in Bowling Green. At Kim’s work, Essity, the company is planning to eliminate over 1,000 jobs worldwide to reduce costs. They care more about the bottom line than those who work for them.

When I asked “Beyond voting, paying taxes, and following laws, what does citizenship mean to you?” there was a silence that followed. Everyone had to really think about the question, which shows me they may have never contemplated it before. Owen brought up the caravan of immigrants that is moving through Southern America up to the United States. This of course led to a discussion about immigration and President Donald Trump’s latest ramblings on changing the fourteenth amendment with an executive order. But then  the conversation took a turn and we started to have a discussion of what it means to be a good citizen. It echoed much of what we discussed in class about citizenship last Thursday. John said that as long as you work and contribute to our society, he does not care how you get here or what your background is. He added that before World War II, citizenship was not even something the government kept track of. If you crossed the borders into the United States and felt like a U.S. citizen, you were one; that was all it took. We have only recently developed this high standard of citizenship in which people must pass a citizenship test and live in the United States for so many years before they can become a U.S. citizen.

Citizenship is helping the people around you. It is knowing your neighbors and lending them a hand when they need it. It is having dinner with friends and talking about more than what is going on in the world. It is about learning how your friends met each other, or how they met their spouse. It is about discussing your past selves, where you grew up, or where your family is from. It is about how you were raised and how that has impacted your worldview. It is about being able to disagree on a subject while also being able to find a common ground in that subject or on anything. It is about recognizing that all humans are equal, despite what country they are citizens of or how they obtained their citizenship in our country.

After the dinner and as we were cleaning up, Kim was discussing with Megan and I about how nice it was to host this dinner. We each enjoyed having conversations we otherwise would not have had. We were able to discuss and talk about issues in a civil manner, and we were all tolerant of disagreement. We were able to find common ground on most anything. However, even if we could not find that common ground, we still respected the opinions of the people around us. Kim made the comment that we should do dinners like this more often because it is important to talk about how we have been shaped by our country, but more importantly how we can shape our country. This reminded me greatly of chapter ten in “The Impossible Will Take a Little While” called Reluctant Activists by Mary Pipher. This is the chapter about the Keystone XL Pipeline that the corporation Trans-Canada planned to cut through the midwestern United States to build, destroying homes and farmland along the way. Ms. Pipher hated the thought of the pipeline running through her area, so she invited some friends to her home to discuss how they felt about it. They gathered around her kitchen table and just talked with one another about what they knew in regards to the pipeline. They agreed that they did not like it and that action needed to be taken, so they made a game plan and met again and again. All it took to put an end to the Keystone XL Pipeline were a few conversations around a kitchen table and with people from their hometown. These regular people started a movement.

Before the dinner, I knew the names and faces of everyone invited. However, after having the dinner, I know them on a much more personal level. I know how they met their partner; I know some of the struggles they have experienced; I know more about their beliefs religiously and politically, but most importantly, I know how to keep having those conversations. That’s what this project was all about for me. It was about learning how to have and seek out those conversations. When problems in my community arise, I am better equipped to speak with my neighbors about how they feel on an issue and taking their thoughts/opinions to develop collaborative solutions.