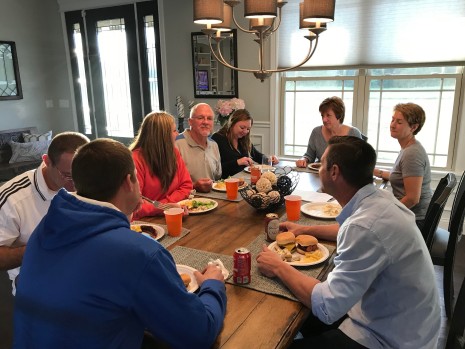 My Kentucky Kitchen Table took place on October 13th in Walton, Kentucky. We gathered around the dining room table and my aunt Lyn and uncle Bob’s as we do 2 or 3 times a month. I was joined by my uncle Keith (a globe-trotting bachelor in his mid 40s who never really bothered to grow up), my mother (a school librarian who always tries to keep the peace on every issue), my aunt Lyn (an opinionated stay at home grandmother), my cousin Emily (a bold and outspoken VA caseworker), my uncle Bob (a soft spoken airport electrician), my cousin Rachel (a former elementary school teacher turned stay at home mom of two children under 4), my father (who has held various positions in the education system for over 20 years, most recently as an assistant superintendent), and Rachel’s husband Jamie (a veterinarian). I chose Jamie to be the participant who I do not know very well. Even though he’s been in a relationship with my cousin for a number a years, I cannot tell you much about him other than the fact that he is a veterinarian who works a lot and that he falls asleep on the couch after almost every family meal. Rachel and Jamie’s kids, Henry (4) and Natalie (2), were also occupying the room with fits of laughter from The Muppet Babies on the television. While culturally this group appears to be fairly similar, their personalities, opinions, and ways of handling various situations is quite diverse.

I started our conversation off by asking the required question about what citizenship means to everyone. No one really knew how to begin, but after a few seconds of silence my mother suggested being a good neighbor. Everyone seemed to agree and my aunt Lyn added making sure that the next generation be better off. Even though we has only barely answered one question, my Dad, Jamie, and Keith all checked out and began to talk about sports. They would each occasionally provide input on the following topics, but not very much. We then began to discuss what we each perceived as the best things about our world today. Again, those who were still paying attention to the conversation grew quiet for a second. As the sound of her 4 year old grandson’s laughter filled the room, Lyn said “grandchildren” as she glanced at the attentive little boy in front of the TV. My mother suggested neighbors again. Cousin Emily says how much more politically active people are becoming. I then asked what kind of community everyone would ideally like to live in. Everyone quickly agreed to somewhere safe and where you are friendly with your neighbors. I then asked what everyone likes about where they live now. My mother and Lyn, who were next door neighbors until a few months ago, both said they liked being slightly secluded yet still close to neighbors. Cousin Rachel spoke of how much she like being able to let her young children play outside without ever really worrying about their safety. Emily, who has been living in Louisville for the past 2 year, raved about the Louisville food scene. Keith joined the conversation for a moment and went on about the Cincinnati night-life. He then noted how different each person’s answer was. We then discussed how each person thinks their job relates to their role as a citizen. Rachel, Lyn, and my mother all agreed that they are raising the next generation and see nothing else that could possibly help to better society. Bob, who has been mostly quiet up until this point, briefly mentioned how critical his job at the airport would be in the case of a terrorist attack. We could all tell this was not a topic he really wanted to think much about, so none of us pressured him to elaborate. Emily, however, explained in depth her duties at the VA. She shared how, when she first started her job, she was told that it was her duty to take as much money from the government as possible and put it in the hands of service veterans. We then moved on to talk about the obligations we might have to other people in our country. My mother, who always believes in being the bigger person, said we must always be nice to others no matter what. Emily agreed somewhat agreed to this, then added if someone cannot help themselves, she does not feel that they deserve her help. I found this statement extremely interesting, especially considered how to just spoke of the duties at work. I then asked what advice each person would give to people running for office in our country. Bob’s answer was quick and to the point: don’t lie and stay away from social media. This sparked a giant debate about the usefulness of social media that, to be completely honest, I did not retain much from because everyone was talking all at once. I instead chose to move on to the new topic. I regathered the attention of the table, including those who had been discussing sports the whole time. I asked if anyone had ever had a conversation with someone from a really different background than their own and braced myself for the answers. Keith, who we joke is never in the country because he spends so much time traveling world, simply said “Well I travel so yeah” and provided no further explanation. Lyn told a winding tale of how she never spoke to a black person until she was an adult and started working in downtown Cincinnati. She explained the stereotypes around which she was raised and how still now in her middle age she sometimes finds herself believing them. The most shocking statement of the night occured next. Jamie, who had contributed nothing so far, said “I stay as white as possible” then followed that with “Oh, but I’m not racist”. His wife, my cousin Rachel, then accused him of being racist. They went back and forth about this for several minutes while I tried to wrap my head around what just happened. It was clear before that I did not know much about Jamie, but this statement still caught me by surprise. Instead of further opening that can of worms, I asked everyone which social issue they consider closest to their heart. At this time, the men chose to return to their sports conversation. Those still participating in our discussion took several minutes to ponder this one. Emily eventually responded with the access to healthier foods across various communities. My mother and Lyn again went back to raising the next generation right. I did not entirely agree that that is a social issue, but I let them speak their thoughts.

My family has never been one to talk about any of this stuff, so I was very hesitant going into the meal. I tried to dig thoughtful answers out of everyone, but was not very successful because I did not want to offend anyone. However, I do still feel like I learned quite a bit. I certainly learned learned a little more about Jamie. I continued to think about what he said after dinner as I sat in the floor and played with his two young children. How will this affect them? Will they grow up to see things like their father?  From observing Keith on a different level, I learned that just because someone has been to every corner of the world, it does not mean they are “cultured”. He can show me thousands of pictures he has taken from foreign lands, but he could never tell me about the problems and beliefs of those places. I also learned that the VA, for a lack of a better term, is awesome. I always knew that Emily worked for them, but never really knew just what she was doing. Hearing her talk about her job reminded me of one of our central questions for this course. Emily is helping others (the veterans) have more control over their lives. She helps them obtain the proper funding to keep them housed and healthy. It also reminded me of Derrick Jensen’s message in “Forget Shorter Showers”. He urges the reader to confront systems of injustice (those in power) and that is exactly what Emily is doing when she, in her own words, “attempts to increase the national debt to give veterans a proper payday” I walked away from this dinner with a much deeper admiration and respect for my cousin Emily.

I must admit, I had been dreading this project all semester for fear that too many problematic things would be said. While that certainly did happen, I am still glad I was able to have these conversations with my family. I learned many new things from observing what they said and how they said it. The topics discussed and shared gave me a new insight on the experiences and thinkings of my closest family members.