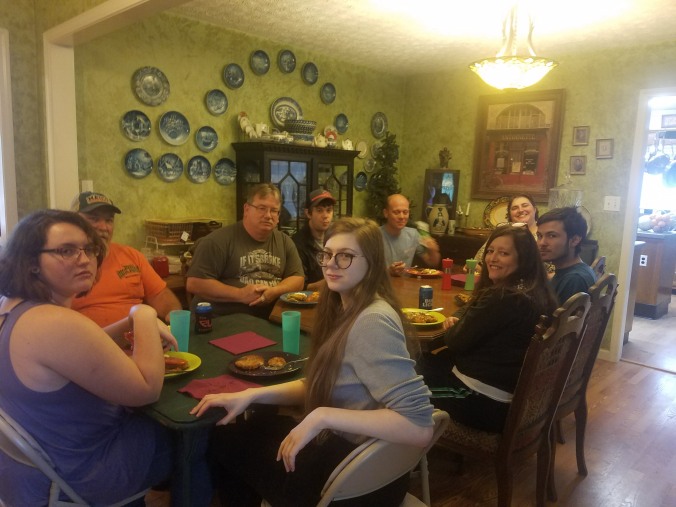 I hosted my Kentucky Kitchen Table at my family’s home in Alvaton Kentucky. Alvaton is a small community about 10 miles out of Bowling Green. My home has been the epicenter of family gatherings for the past 9 years and because it is such a comforting place for a lot of people, I decided it was the best place to host a conversation over dinner. My Kentucky Kitchen table happened in our dining room ,instead of our actual kitchen because I needed to be able to sit the 9 people, I invited, around a single table.

The 9 people I invited came from a variety of age groups. The biggest age group consisted of 48-55 year olds. This group provided a perspective of living a majority of there life in a time before I was born. In this group were my parents (Tim and Toni), my Uncle Lloyd, and his girl friend Paula. Tim and Lloyd are brothers who love cars, love their children, and are loved by all animals. My father and uncle also have the unique experience of being raised by my fiery grandma. Toni ( my mother) is a daughter of a world war 2 refugee, a mortgage officer, and a creative, loving person. Paula is my uncle’s girlfriend, she works for better business bureau, and loves her daughters and grand children. The second age group was 29-33 year olds. This age group consisted of my cousin Micheal and his friend DP. My cousin Micheal is 33 years old, an internationally trained chef that currently works in construction. I didn’t know DP well , so when I asked how he liked to be described, he said to just put that he is from Mississippi. The third age group ranged from 16-21. This group included my boyfriend Joseph, my sister Hanna, and Julia, my sisters friend. Joseph is 21 years old, he was born in Arizona, and actively tries to identify with his Mexican heritage. Hanna is 16, loves her dogs, identifies as Asexual, is an insanely fast reader and is probably one of the smartest people I know. Julia is 16, identifies as Queer, speaks fluent German, is the daughter of an Egyptian immigrant, and a German immigrant.
Everyone brought food to this gathering, however I helped my mother prepare the main dish of the night. My mother and I made her mother’s recipe for Weiner Schnitzel and baked tomatoes as well as some vegetarian Schnitzel for me to enjoy. My Uncle Lloyd and Paula brought potato salad. My cousin Micheal brought a tomato and pepper salad. Julia made her mother’s recipe for Baklava. DP made sweet tea and Joseph brought juice.
Once everyone had taken at least one bite, explained the assignment to them. As well as told them not to say anything they didn’t the internet to know such as if they murdered someone in 1995. Then I preceded to ask the first question of what citizenship means to you. The first person to answer was DP and he said “Imprisonment”. I barely understood what he meant by that but luckily the other people at the table had more to say. For the most part people said something along the lines of being a citizen to them meant they had the freedom to be who they wanted and have the opinions and beliefs they wanted. I believe the most impactful thing said about citizenship came from my mother Toni. She explained how sacred and important United States citizenship had been in the creation of her life and why she loves this country despite its issues.

Toni believes she wouldn’t have been alive today if her mother and grandparents hadn’t been granted first entry to the United states then later citizenship. As Toni was telling the story of her mother’s escape from a fascist government to her path to citizenship in a new country, I noticed many parallels between her story and Exit West. For Example, in both stories loved ones had to be left behind in the dangerous country because they were either to old or scared to leave.Another parallel is that both my grandmother and the main characters in Exit West face xenophobia in the countries they found refugee in. I think that what I read in Exit West helped me to understand the struggle immigrants and refugee’s face, while the story of my own family’s experience as a refugees made this understanding so much more personal to me.

My mom’s comment about citizenship, started a discussion about immigration. For the most part almost everyone at the table was pro immigration expect for Paula. Paula believes that muslim immigrants are very dangerous and tried to conscience of it for a whole five minutes. I didn’t try to change the subject even though I heavily disagreed with what she was saying because I felt it was important to hear some one who has a different opinion out. However after Paula made a comment about how Muslims hated god , Hanna had enough and finally spoke up. Hanna gave Paula a education in the progression of the there monotheistic religions. This magically ended the conversation about immigration. However, it magically appeared again later with some other political opinions even when the questions asked had zero to do with politics. I learned a lesson of life that people are going to talk about what they want , even if it has nothing to do with the conversation at hand.

The question I asked next was as “What kind of person do you want to be?”. Interestingly enough some answered this question in way that could be applied to the three questions that frame our class.”How can people live better (or, at the least, less badly) together?
How can we solve problems? How can we have more of a say over our lives – and contribute to others having more of a say over their lives?” For example Micheal said that he just wishes he had more say over his life, so he could be more helpful and happy. Another example is that Paula and Toni both said they just want to help as many people as possible / be everyone’s mother. Actually both Toni and Paula’s career reflects this wish of theirs. Toni assists people in owning a home and even when they can’t get a mortgage she still helps them work towards making the changes necessary to receive one. Paula helps to protect people from bad or hurtful businesses. Julia and Joseph’s answer had less to do with the class’ three central questions and more to do with their current struggle with identity. Joseph described to us how he wishes he knew more about his Mexican father because he feels as fills part of his identity is missing. Julia just wants to be able to balance her multiple identities such as being Queer and a strict Roman Catholic or trying to balance the three cultures(American, Egyptian, German) that are part of her life. However this struggle with their identities fits into to one of the main themes of this class about how we view ourselves and others. Basically they were bringing real world experience of the Self part of the course to light to me.

I also asked the question “ Which social issue was closest to your heart?” Toni expressed that helping immigrants and refugees was closest to her heart. Paula expressed that she just wanted equality for everyone and help anyone no matter their differences. Hanna said at the moment mass shootings in schools, and our education system is the closest to her heart. Julia informed us about why LGBTQ+ rights are so important to her. This actually lead to an interesting moment when Julia explained to the two older age groups what each letter in the acronym meant because they had very little experience with the acronym. Then this led into me saying and realizing how important multi generational, and multi identity conversations are because people’s hearts are usually in the right place they just are not always educated in the current lingo to express their support or beliefs. Also during this discussion, I got this really great advice from Tim and Paula. Basically that even though ,I care about so many social issues, I can’t solve them all without burning myself out. This advice remains due of a class discussion we had about how to know when you have fulfilled your moral responsibility. I remembered in this class discussion that we agreed we should do as much as we can but not where it interferes with our own personal comfort. I believe that is what Tim and Paula’s advice is based in.

The final questions I asked were “Did you know your neighbors growing up and do you know your neighbors now?” I noticed a trend with this question. The oldest age group answered yes to both, whereas the other two age groups answered no to both. When prompted to explain their answer, the oldest group agreed that it was important to know your neighbor so you could have someone to depend on nearby. For things such as, sharing things like sugar and bobcats, having someone to watch or care for your house when your gone. The younger groups expressed a fear that their neighbors could be crazy murders and that is why they choose not to know there neighbors. I thought it was interesting the contrasting views between the generations . The fact that one group find a security is knowing their neighbor and the other felt more secure not knowing their neighbors. The most interesting trend I found was that every single person at the table believed that a sense of community is a very important aspect of humanity. This made me wonder how will my generation and younger form communal bounds if we are to scared to know our neighbors?

Even though my Kentucky kitchen table got a little loud, and everyone had differing opinions, nobody had any anger for anyone else at the table after the conversation was over. That to me was one of the most amazing thing , that a group of people could talk about such serious and deep topics without hurting each other. And I know this is an experience we frequently have in class , but experiencing it in a less controlled setting solidified my hope in community conversations. I will end this blog post with the last thing my uncle Lloyd said on Sunday: “The great thing about the United States, is that people are free to have different ways of being.”