My meal took place at my grandmother’s home in Bowling Green, KY. Although my hometown is Lexington, Bowling Green has always been a second home for me. My parents were both born and raised here, and graduated from Western Kentucky University together in 1992. My grandparents live here, as well. For as long as I can remember, my family has made many trips here to attend WKU games and to visit with family. To say that choosing WKU for college was easy is an understatement. So, doing my Kentucky Kitchen Table project here in Bowling Green was very easy, for it truly is like home.

At my dinner were myself, my boyfriend, Nate, my grandmother, Janet, and a girl who lives in my dorm building, Meredith. Nate is a very funny and kind person. He is nineteen years old. He loves to hunt and fish, basically anything that will get him outside. He grew up in Bardstown, KY, and attended a catholic private school. He is also intelligent, and is majoring in biology with a pre-med concentration. He is an amazing boyfriend and best friend. We met in the elevator of our dorm the first week of college. He is easy to talk to and fun to be around. Although we share many similarities, we have a lot of differences, too. Our religious practices vary slightly, and most of our political views differ. We were also raised in different homes and lifestyles. I enjoy getting to discuss our differences and our perspectives on various issues. Janet is the most selfless person I know. She would do anything and everything to help someone, especially her family. She is sixty-nine years old. Retired now, she was a nurse. She won the battle against breast cancer when I was a toddler. As I have grown up, I have become closer and closer to her. She is a Christian and she holds her faith near and dear to her heart. She considers herself an independent politically, and is always willing to hear many different perspectives and ideas. I know that if I ever need anything, I can call her. Meredith is also from Lexington, KY, but I never knew her until now. She has the same major as me, nursing, so we have several classes together. Although I don’t know her very well, I wanted to invite her to this dinner because she has always shown me kindness. She lifeguards during the summer, she attended an arts school in high school, and I learned that she loves reality TV shows as much as I do.

For dinner, I made mac-n-cheese, Nate made green beans, my grandmother bought chicken, and Meredith made brownies. When we got to my grandmother’s house, the table was set beautifully. I loved it. She even lit candles, which I never really do at dinner with my immediate family. I made that comment, and my grandma told me that she always lights candles at dinner, and even told me that my aunt and my dad would take turns each night lighting the candles. Meredith said that her family would always light candles at dinner too. Although something kind of random, I thought that story was cool to hear, and possibly something I wouldn’t have heard if we didn’t have this meal. It was interesting to hear the difference because that is something my usual dinners never have, but something that their dinners always have.

At the beginning of the meal, I started by asking what citizenship meant to everyone. We went around the table. Nate said to him, citizenship means being a good neighbor and preserving his culture. He also thinks that writing his politicians educating himself from multiple perspectives on current issues is a key part of being a good citizen. Janet’s citizenship means being active in her community. She said that when she was younger and had kids, it encouraged her to become even more involved, for her children were part of different sports and activities which in turn made her get involved. She also said that being a leader and supporting local organizations is important, as well as taking care of her neighbors. Another thing she believes is important to citizenship is following the law, for the laws are ultimately made to protect everyone. Meredith said she tries to be a good citizen by being involved in the community, too, like going to local events. She also thinks that listening to others with respect and gaining insight from others, from differing perspectives, can help you cooperate and agree with more of your fellow citizens. I agree with what everyone said, and I feel that all of that contributes to my citizenship, too. I added that being nice to our neighbors, just with a smile and wave, means a lot to me as a citizen. Especially in the dorms, I make an effort to just be friendly to the girls in my hall, because I know that I appreciate that too.

Nate asked next what social issue means the most to everyone and why. I began to discuss my social issue, the standing or kneeling for the pledge of allegiance. I am such a proud American, and I feel so lucky to be a citizen in this country. To sit or kneel for the national anthem, to me, I explained, shows disrespect for the people who fight for everything that the national anthem embodies. I also shared a story of a WKU football game my family and I attended. We have season tickets in front of an elderly couple. As opposed to us, they do not attend many games, and it is pretty clear why. The man is quite old and has a very difficult time getting around. My dad will often help him stand and sit from his seat. He is a veteran, and though he did not stand during the entire game, he would struggle to stand just for the pledge of allegiance. It always brought tears to me and my mother’s eyes. Meredith’s social issue was the lack of funding for the arts, especially the cuts to her arts program back in high school that are taking affect now. She discussed how much she enjoyed her high school and the impact it made on her, and shared her concerns with this lack of funding. This statement lead us to discussing the current pension issue. I learned that Meredith’s mom is actually a teacher, so she could personally relate to this. My aunt, Janet’s daughter, is also a teacher. I posed the question, “where should we cut money from?” because, of course, no one wants money cut from their department, job, sector, etc. Nate suggested the military, while Meredith explained that a student in her communications class thought hemp could be a solution. His family’s farm was allowed to grow it this year, causing both their farm and the government to make a great amount of money. It was interesting to get to talk about such a relevant issue.

A reoccurring theme in our conversation was the value of the most basic level of community, our neighborhoods. Despite the topic we would be discussing, we would somehow always get back to being a good neighbor and the neighbor that you would want to have. Being a good neighbor, to us, means being friendly and simply smiling and waving, and being there for them when need be. A good neighbor is involved in their community and is willing to help out when people are in need. I think this shows that the epitome of a good citizen is a good neighbor.

Another theme that was prevalent throughout our discussions was the diverse opinions and background each of us held, and yet the mutual respect for one another. Although we all came from varying hometowns, religions, political views, ages, genders, and more, we were able to find a lot of common ground by discussing things in this fashion. We made eye contact and listened to what each person was saying, and kept an open mind. We tried to see things from each others’ shoes, and considered varying beliefs even if they opposed your own.

I was reminded yet again that deliberation truly is one of the best, if not the single best, ways to discuss these controversial, wicked problems that the world faces. As Keith Melville in “How We Talk Matters” explains, talking matters because by communicating in a better way we are more apt to agreeing and make democracy work better. Deliberating fosters group discussions and helps decision-making. He writes, “public deliberation is useful when there is a discrepancy between what is happening to people and what they think should be happening—yet there is no agreement on what should be happening.” Our society faces so many issues like these, with no right or wrong solution that affects so many peoples’ lives. By deliberating with people, like we did at our dinner, we were able to be empathetic and see things from other perspectives while finding common ground. Though our dinner was not a proper deliberation like those we have in class, it was a civil discussion that allowed us all to share our personal experiences, our opinions, and areas where we shared common ground, despite our diverse backgrounds and core beliefs.

This relates to the class, for living better together and solving problems can be made a little easier by simply having a discussion, perhaps a dinner around a table in your hometown. 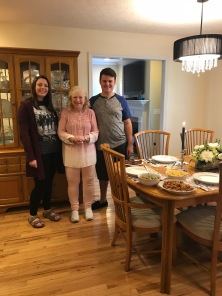 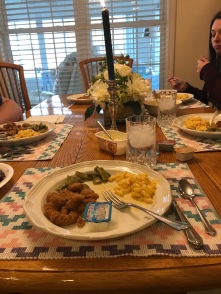