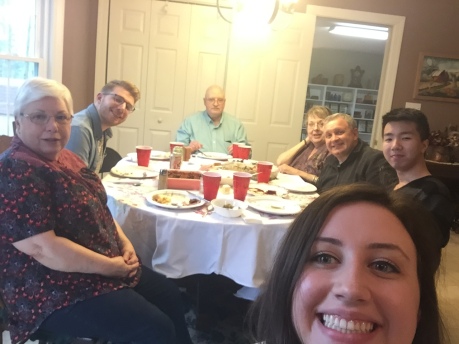 On Easter Sunday, seven people, ranging from my close family to a considerably recent acquaintance, gathered at my grandparents’ house for a time of food and fellowship in Alvaton, Kentucky, a community outside of Bowling Green. For me, traditional family dinners on holidays are a well-worn tradition that has formed my childhood and shapes my adult life. This dinner allowed me to catch up with my family while also adding a new guest and the opportunity to discuss and deliberate on a variety of social issues and our interests regarding citizenship.

Around the table sat a variety of interesting personalities that brought an array of experiences and opinions to the conversation. My name is Emma, and I am a nineteen-year-old studying elementary education and history at Western Kentucky University. While I have lived in Bowling Green for the past ten years, much of my childhood was spent in Indiana. My dad, Steve, is forty-eight years old, holds degrees in political science and student affairs and a doctorate degree in educational leadership, and works as an administrator at the University of Kentucky College of Medicine. While Steve is a registered Republican, he is often relatively moderate in his political opinions. Also at the table were my maternal grandparents, Larry and Norma, who are in their late sixties. They are high school sweethearts who have lived all over the country from Indiana, Texas, California, Nebraska, and now, Kentucky. They have two children, a son, who lives in Colorado, and a daughter, my mom Laura. Larry is a retired engineer who now fills most of his free time with woodworking, photography, and watching football. Norma is also retired and enjoys quilting and cooking. She insisted on cooking the entire meal on Easter Sunday, which was full of traditional comfort food. Both Larry and Norma are considerably conservative in their political opinions. Auntie Carol, despite her affectionate title, is not actually related to anyone at the table. She was born and raised in Iowa but spent much of her adult life in Hawaii as a massage therapist where she raised her two children. She lost her husband many years ago to cancer, and after meeting my grandparents, she befriended my family, moved to the mainland in Nebraska, and has become like another grandparent. She, too, is largely conservative politically and a devout Catholic. Next to me sat my boyfriend Baker, a twenty-year-old advertising and graphic design student at Western Kentucky University. Baker was born and raised in Kentucky, works as an intern at a local church, and considers himself to be politically moderate. Finally, my friend and classmate, Reuben was our new and very welcomed guest at the table. Reuben was born in New York and is very involved with learning and growing in his Chinese heritage. He is an architecture student at WKU. Primarily in age, levels of experience, and interests, our diversity was evident as we sat around the table. After catching up on school and hobbies and discussing my mom and sister, who were out of town on vacation, we began our deliberation on citizenship and other topics that were important to us.

“What does citizenship mean to you?” opened the conversation and provided the opportunity for many people to discuss their perspectives. Carol discussed that it was a privilege that is often taken for granted by those who obtain it by birth. She said it was more than just living somewhere and that it should be appreciated for all the rights and responsibilities it brings. She discussed her appreciation for those who work to obtain citizenship honorably but also recognized her lack of appreciation for those who may try to immigrate illegally. Larry and Norma both remarked that they were extraordinarily proud to be American and that people often forget how special it is. Baker noted that a close friend of his, an illegal immigrant, had recently become engaged to an American citizen, an occurrence that some people had speculated was just an attempt for him to gain citizenship. Baker’s comment sparked conversation regarding the DACA, or Deferred Action for Childhood Arrivals, controversy. Steve adamantly opposed the deportation of illegal immigrants who arrived in the United States as children. It seemed that Steve felt that a person who feels a connection to the place they live and is willing to contribute to the productivity of the society deserves the opportunity to stay in the country. Norma added to this point, saying that many natural citizens of the country lack the willingness to contribute to society and rely on government assistance. The overall theme of the answers to the citizenship question seemed to be that American citizenship was a privilege that should be held in the highest regard. Too often, we take the rights we have for granted.

Then, Reuben posed the next question about whether the group trusted the government. Carol answered quickly that she did not but began to reason through her adamant opposition to the current government. She stated that the government is currently far removed from the people it serves, particularly at the national level. This was a resounding comment at the table. I mentioned my thoughts that perhaps the democracy envisioned at the country’s inception was not the democracy that frames the nation today. I mentioned that I firmly believe in the country’s ideals, but I think too often, the ideals that shaped early American values remain absent from the America we know today. Steve, Larry, and Baker discussed the concept of term limits for legislators who may maintain a level of comfort that prohibits them from executing their duties effectively. Norma mentioned that it is up to the citizens to ensure that unofficial term limits are enforced. Overall, this topic yielded an agreement that the government’s failures, especially on the national level, are currently more evident than its successes. Additionally, I found it interesting that the entire table agreed that citizenship is a distinct privilege, yet we all found issues within the government that seeks to serve its citizens. Reuben also asked the table if we held a hope for humanity. Each person giggled slightly at the seemingly dramatic question, but after a few moments, many of us came up with a thoughtful response. While I do not remember the specific responses, every person at the table agreed that hope in humanity was certainly present. I think hope for the future and a hope for the success of ourselves and the people around us is what ultimately drives all ambition and purpose. I also couldn’t help but look around at the kind, familiar faces that sat at the table and the large helpings of food in between us and feel that my hope in humanity, as silly or dramatic as it may sound, was right around me in that moment.

This afternoon allowed me to appreciate the many perspectives of my family that are not often shared around the familiarity of the dinner table. Additionally, it allowed me to see that taking the time to get to know a classmate and appreciate him for the unique experiences he brings to the table is a necessary and special way to stretch beyond the comfort of an ordinary family dinner. I left the dinner with a new appreciation for the many backgrounds present that allowed each of our circumstances to meet at that specific moment. Furthermore, I saw the benefit of the deliberative engagement described by Keith Melville. While we did not solve the world’s problems over dinner, my family did gain insight into diverse opinions and maintain respect for one another while discussing issues of considerable importance.

I think it’s important to note that one of my favorite moments of the afternoon occurred outside of the meal we shared together. My grandparents are antique dealers, and one of the rooms in their home is dedicated to many of their priceless or collectible items including Native American artifacts, tobacco tins, clocks, china, and Civil War artifacts. One of the more special items in their collection is a Civil War rifle that was carried by one of my relatives in the Battle of Antietam. Before our meal, my grandma showed our special guest, Reuben, around the antique room and allowed Reuben to hold the rifle, which is one of the photos I included. After reflecting on the afternoon and looking at the picture of Reuben holding the rifle, I came to an interesting realization. My relative, Joseph Carter, carried that gun into a battle in 1862, and Reuben is a young man descended from Chinese immigrants living in 2018. There seems to be little connecting the two parties, yet the simple invitation of Reuben to my grandparents’ home allowed this wide gap to be bridged tremendously. In our class, we often discuss a bridge that connects how things currently are and how we would ideally want things to be. The bridge holds many diverse ideas and strategies, yet I think the overarching theme of the bridge is effort and respect. It took a small amount of effort to invite Reuben to a family dinner, and we all enjoyed and respected hearing his unfamiliar and diverse stories and ideas. Similarly, if even a small amount of effort and respect is applied to other aspects of life and deliberation, many other wide gaps can be bridged as well.