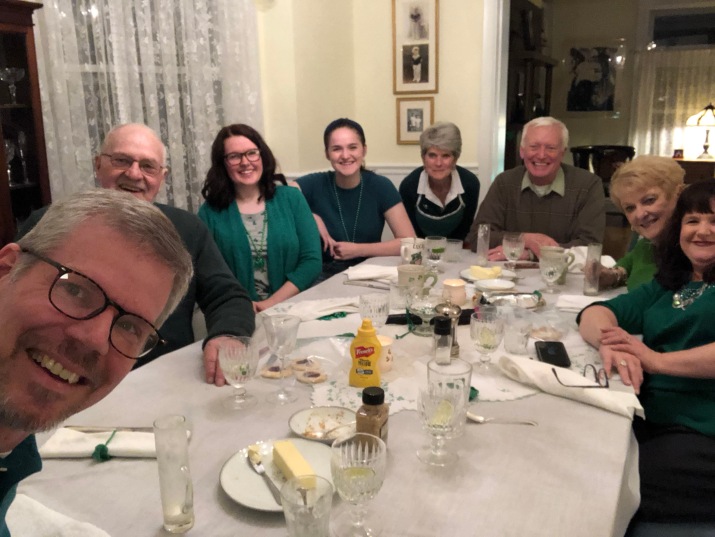 I conducted my Kentucky Kitchen Table in my hometown, Fort Thomas, KY. The attendees were very diverse in terms of age and background, and less in terms of race and ethnicity. The dinner took place at Maureen and Don’s house, a retired married couple. Their son Ken, a college professor, and his wife Lori, a nanny, were also in attendance, along with Maureen’s good friend Mary, a retired widow and great-grandmother. To represent a younger demographic was Katie, a graduate student at the University of Cincinnati. Perhaps the guest I knew the least about was Dan, a Catholic priest in his 60s, and a close friend of the hosts.

When asked the only required question regarding citizenship, everyone around the table seemed puzzled. It wasn’t that they didn’t know the answer, Maureen assured, it was that some of them were old and it took them some time to process what was being asked of them. Don later remarked that it was just a difficult question altogether, and to be fair, it was. When asked the question myself, it took me a few minutes to gather my thoughts and collect them in a way that would come across as comprehensible. So, we collectively decided to talk about some of the other given topics and hopefully that would end up tying into the first question. Because all of the guests were of varying age groups, I decided to ask about how they thought their age impacted their attitudes towards things like the government, morals, and citizenship. This question led to lots of stories about everyone’s childhoods, and gradually led into experience with certain historical and/or political events that happened at some point in their lives. Mary explained how when she was young, her family struggled to get by in the depths of WWII. She recalled that all she wanted one year for her birthday was a wagon. But because of the shortages of certain metals, she wasn’t able to get one. This, she explained, made her cherish the little things in life. Furthermore, to connect this memory to what she thought citizenship should be, she remembered sharing the ration stamps with neighbors in times of struggle, and this led to her belief that a sense of community and helping others is extremely crucial. We then briefly talked about neighbors. Ken, Lori, Don, and Maureen all said they had close relationships with at least 2 of their neighbors. Katie viewed this as less important, and Mary explained that it had been extremely difficult to try to build relationships with others following her husband’s passing. However, despite these differing relationships with neighbors, the consensus was that it is a positive thing to be close with neighbors because it creates a sense of community that some would argue is lacking in today’s society in the United States.

All of the older adults at the table explained that there had been times in their lives where it felt like everything in the United States was falling apart. Most notably, they collectively agreed, was the 60s. Not only was the Cold War happening in the early 60s, but it seemed to the American people that life in the U.S. was just one tragedy after another. The assassinations of John F. Kennedy, Martin Luther King Jr. and Robert Kennedy left citizens feeling hopeless, and growing objection to the Vietnam War left the country divided. Maureen then went on to explain that it was in times like these where being a citizen is the most important, and she pointed out that when she felt an injustice was being done in Vietnam, she refused to be quiet about it. She continued in saying that although it may be easy for people to just give up when it seems like everything is falling apart, we cannot just “throw in the towel.” It is our duty as citizens to foster community efforts that will make our country a better place for the coming generations. You have a duty to care and to try to educate yourself, she argued, no matter how hopeless things may seem. She articulated further by saying that we cannot expect everyone to protest or to become a politician, but we can expect everyone to care about what is happening in their country. This idea of having a duty to care/educate yourself about the state of the country overlapped with later conversation about our country today. Without getting too absorbed into the mess of today’s politics and the 2016 presidential election, Katie made a point that it was easy for people, especially young people, to tune out important political points made by the candidates, because the focus was on mudslinging and taking down the other side. Likewise, it was easy for people who already didn’t particularly care about politics to tune it out even more because the slander and scandal gave them reason to.

I wanted to lastly bring up religion and its relationship with citizenship because we had a priest at our table and I was curious about his input. Fr. Dan explained that as a Christian, he hopes that everything he does shows God to people that he interacts with. He strives every day to communicate the love of God and the Christian faith to those listening to his homilies, and he wants nothing more than to show people the love that he believes God can grant them. In building these relationships within his parish, he strengthens his church community – the type of community that we had concluded was so important earlier on in the meal. Loving one another through God and doing all things through Him is something Fr. Dan believes to be a big part of citizenship. Loving people, accepting them no matter the circumstance, and withholding judgment are all important components in creating a more positive and progressive world for those to inhabit it in the future. His religion and his moral beliefs have shaped his political opinions and influenced his passion to create a happier and stronger community in his parish. The others agreed, and although they did not have the same experience as being a religious figure, each person agreed that their religious beliefs or lack thereof often influenced their attitude towards other Americans, the government, and politics.

To conclude, our conversation during dinner was largely centered around the importance of community, hope, and spirituality, which all in some way relate to central themes of Citizen and Self. In reflecting upon the conversations that took place during dinner, I realized that a lot of what was being said related to the central questions of this course. For example, everyone seemed to believe that a sense of community is crucial in making life better for us and those around us. This directly relates to the question of “how we can live better together” and other similar ideas that are associated with interpersonal relationships and an emphasis on working collectively. My first inclination is that this ties into Maas’s Love Thy Neighbor. Although we are not at war with our neighbors, everyone seemed to agree that fostering relationships with those living close to us is beneficial to everyone involved, and that all involved parties should make more of a conscious effort to develop these positive relationships. Furthermore, kindness should not be limited to those similar to us, and that to live better together and to make society a better place for the future, being respectful, tolerant, and generally kind is an easy, but often overlooked significant factor. Something else interesting that resonated with me was that there was a general consensus from everyone at the table that we have a duty to work together and make conscious efforts to sustain and improve our society for those to come.

Overall, I learned a lot about different perspectives that people older than me may have. It was very interesting to hear childhood stories from people of such a wide age range, and I even learned some history. Textbooks and documentaries can only teach you so much – and in my opinion, it is more interesting to hear the perspectives of those that lived through the times firsthand, and it is often an enjoyable experience for the storyteller as well, provided that the memories are positive. Conducting this dinner was an eye-opening experience for myself, and even some people at the table. Katie, the graduate student, told me post-dinner that she felt that her attitude towards the importance of community had changed. I felt similarly – it is no secret that millennials and those younger are often so caught up in their own lives and the lives of those closest to them that they fail to see the importance in building relationships with people unlike themselves, or even just their neighbors that may be a different age. Hearing the positive experiences of those older than us in times where community was crucial made us younger adults feel that maybe more of a focus on community and helping others without expecting something in return would create a brighter future and a generally better place to live. All in all, actively listening to the thoughts of people different from me not only taught me a lesson in history, but also one of acceptance.