This past weekend I had the opportunity to eat a dinner around a table in my hometown, Louisville, and discuss the way the world is, and how our community interacts. Among the people I ate with was an “optimistic dreamer” who spends most of her time at the University of Louisville’s Office of Technology Transfer getting a first look at the new technology UofL has to explore, her name is Karen; a “quiet mom” who works passionately with GIS (geographic information system) looking at data and the maps in Louisville, her name is Lisa; the “hardworking” renaissance man I call dad, and of course, my “warm” Aunt Jenny who often used her experience working as a behavior specialist to add an authoritative response to the discussion. My Aunt Jenny was the first person to come to mind when thinking of who would allow me to host a dinner at their house, and she was thrilled to have an opportunity to bring out her china. Everyone brought their own dish to the dinner, and I supplied the dessert. The two woman, Karen and Lisa, that my Aunt Jenny invited where complete strangers to me when we began the meal, and throughout I noticed the difference in backgrounds and things that were closest to their hearts; I think that was one of the things that made the discussion that much more beneficial for us all.

The first thing I noticed when beginning the dinner was that the individuals around the table had never had an experience like this one before, and after answering their many questions about what my class is like I noticed how much they were all looking forward to it.

We started with my aunt’s homemade chili and a caesar salad that Lisa brought, and throughout the meal I saw a connection between how little these people had experiences like this and how they reacted to the questions I was asking; they often times had to think a little and a few times their response began with “I had never really thought of that, but…” I can definitely relate to this; many of the articles we have read in Citizen and Self have opened my eyes to options I never would have thought extensively about. We spent the first bit of the dinner discussing citizenship and what it meant to them, and Karen said that she thinks being able to be the person that you are is what citizenship is all about, and mentioned religion as an example. There was an overall agreement that those things were often taken for granted, and as the night went on their opinion on that slightly changed as they discussed social issues and how there are so many people in the world with a fear of being the person they are. I thought that it was interesting to see their slight shift in opinion, and while I think their opinions were very optimistic and hopeful, I think they were expected and represent a large part of how we think today. We believe something to be true until the moment the truth is contradicted and we either end up feeling inferior to the opposing argument, or fight back, when instead we should think for ourselves and have a reason behind a change of heart. While they were discussing which social issues are dearest to their hearts, I noticed that they were bringing up things that they felt a lot of empathy for, whether that was the kids from Maryhurst Alternative School in Louisville, who need escape from abuse, or something more widely known such as abortion. A lot of the discussion surrounding these social issues came from a more personal discussion about home lives. Because my dad and my aunt were both at the table, they had similar perspectives of their childhood: growing up around a dinner table where they had the same meals every week and could not leave the table until every bit of the meal was finished. My dad said, “I mean I can look back at it now and think of it fondly, but at the time I really hated it.” Karen thought of the girls in Maryhurst and how they definitely did not have safe home lives, and made the comment that so much of what she knows, from manners to social problems, comes from her household and how she was raised. A lot of the conversations that we have with our families are what shape the core of who our family is, and I think that can definitely relate to what we talk a lot about in class; what we are commonly exposed to, the media for example, is where we get the base of our arguments.

My Aunt Jenny spent the second half of her career working as a behavior specialist for Jefferson County Public Schools in Louisville, and during this dinner she mentioned how she feels as though she has an obligation to help families and children find their way in life. It meant so much to her to first-hand see the improvement in the student and the way they interact with their family. I think it is common for individuals in society to really resonate within their career path and think of it as their way to contribute to the community. It is a personal obligation, where she, and many others, feel the desire to see something happen. Later, when speaking about which social issue is closest to her heart she spoke about how she has a lot of empathy for the families she works with that need food stamps, but then struggles when she sees those parents with a laziness towards getting a job. That is another example where the people at the dinner noticed the contradiction in their own lives, which is something we talk a lot about in Citizen and Self; there being a disconnect not between how we feel, but how we explain how we feel. I was curious to see if anyone else around the table has something that they do because they believe that it is the morally right thing to do. Lisa talked about how she always felt the need to help the homeless by giving them money, although she often felt uncomfortable doing so. She eventually came up with a plan to take them out for a meal with her rather than just handing them the money and not seeing the use they put towards it. This situation reminds me of our discussion of Haidt’s article Righteous Mind, specifically about the elephant and the rider and I think it is a perfect example of a person’s rider taking a little control to explain a more logical approach to the elephant’s actions.

As dinner continued and we had the choice between Karen’s chess pie and my brownies, my dad was still thinking about the question about obligations to the other people in our country/community. He kept bringing up the point that “honesty is so important, regardless of the situation,” and went on to share his opinions on doing what is good versus what is right. His comment made me think about a time when a person in my life had lied to me about something that, had I found out about at the time would have really hurt me, and they did it to ‘protect’ my feelings. I learned from finding out the truth later that that experience was one where I would have much preferred the person have done what was right, instead of what was good; honesty is so important to me. I remember talking a lot about the battle between good versus right while discussing Ivan Illich’s speech, “To Hell with Good Intentions,” in class, and this moment at the dinner table was one where I felt I could really put the readings I had studied from class into the real world because someone I know from home was speaking about the same thing, it was quite frankly pretty cool.

I wanted to end the dinner on a more positive note, so I asked the question about the best things in our world today and each person had immediate responses. They were shouting out words like “people,” “love,” “family,” “relationships,” all of the things in the world that we can have strong connections with if we really try. Lisa’s response was one that I really loved, and it stuck with me throughout the night: she said, “the best thing is being able to help others in a crisis, it is about humanity and humility.” I think that if everyone took the time to talk with their neighbors and their families about the issues they hold dearest to their hearts, that it would start a chain reaction and broaden to positively changing the way democracy works today. We also talked a little about democracy during the dinner, and my Aunt Jenny spoke about how although we have so much freedom in the U.S., people still take things like religion and race and judge others with a righteous and almighty mindset; one that will have the opposite effect for an improving democracy.

Overall, I really enjoyed this experience. The reactions I got before the dinner had even begun were ones that would definitely inspire me to implement discussions like this into my daily life more. This was the first time that I had ever gone into a conversation about the world and about democracy that I had a different approach to, and it definitely had an impact on me, and hopefully the others around the dinner table. I learned that while my dad and my Aunt grew up in the exact same home environment, their adult lives had shaped them into seemingly very different people. Karen and Lisa both said that they never would have thought to taking the first step in befriending their neighbors, and I honestly cannot remember that being a normalcy in my childhood home, either. This semester we have been talking all about community involvement and actually getting out and talking with people about the topics that are depicting so much of our lives, and this night felt like a really good start. 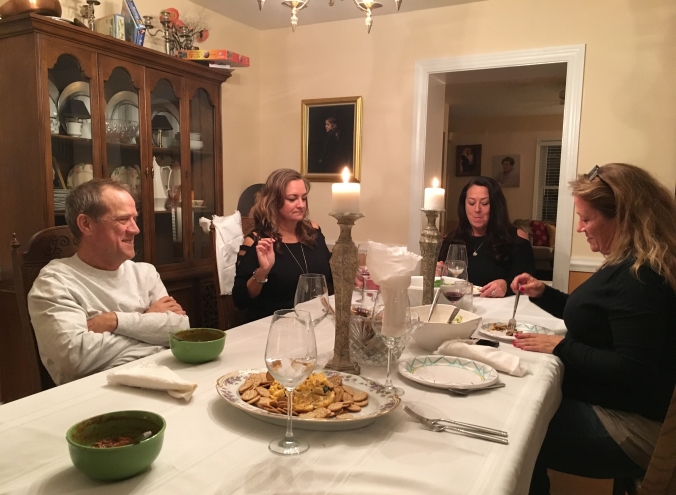