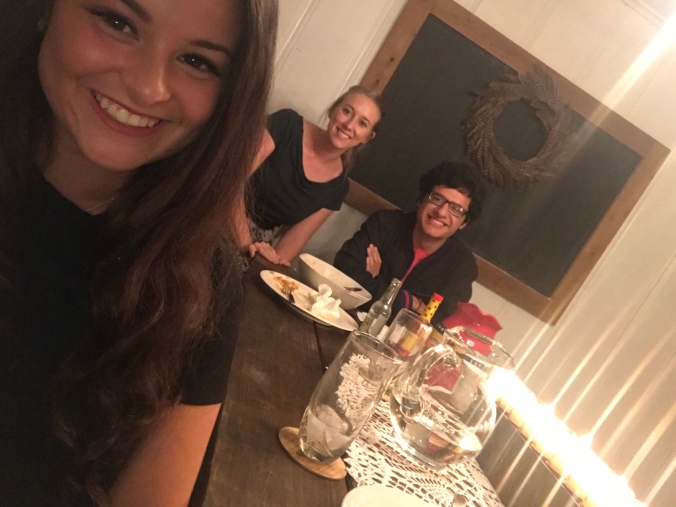 Even though I have been at college for just half a semester, I can say that Honors 251 (Citizen and Self) is one of my favorite classes here at WKU. The critical thinking and discussion format of the class is something that as a biology major I do not get very often. Furthermore, the discussions have been far more civil than I have seen before. It is much more often a deliberation rather than a debate. This being said, I was very nervous about the project. I was unsure of how well the discussion would go or if I would have anything constructive to say. Regardless of my initial feelings, I was still excited for the very unique project and approached the table with as much confidence as I could muster. The saying “fake it till you make it” is somewhat appropriate here.

My Kentucky Kitchen Table took place in the city of Bowling Green not too far off from campus. Though I had planned it in my mind to eventually schedule a Kentucky Kitchen Table in my hometown, this specific table was prescheduled for me by my professor who had offered it to anyone who wanted an easy, local table to go to. It was clearly a good opening I was willing to take. Additionally, this table also involved member from the Honors College, so this dinner turned out to be a great opportunity to get to know members of the Mahurin Honors College better.

I was emailed that there would be four of us in attendance, though there would only be three of us in total because one of our other guests, Sharon, was unable to make it. I got into contact with the other student I would be eating with beforehand. Her name was Taylor-Grace and was a freshman in the other Honors College Citizen and Self class. We decided it would be best to carpool together since I had a car on campus.

Coming into the driveway, the house was beautiful with vines growing on the side, a swing on the front porch, and pumpkins to signal the fall festivities ahead. Being warmly welcomed inside, I immediately noticed how tastefully furnished the house was. We joked that it looked as if it came right out of the TV show fixer upper on HGTV. The dinner was being held in the home of our host, Caitlin who worked as the coordinator of constituent relations in the Mahurin Honors College. She was twenty-six years old, a WKU alum, and her husband also worked at WKU in the sports department as the media director. Though we were all connected to Western and the Mahurin Honors College, I would soon find we had some diverse interests and opinions to bring to the table.

For dinner we had a wonderful jambalaya made by Caitlin. There was also some delicious greens picked from Caitlin’s parents’ garden.  Taylor-Grace and I contributed by bringing some sweet desserts to eat later. I brought a s’more dessert that my mom has made for years. Taylor-Grace brought a Bowling Green classic: a box of doughnuts from the Great American Donut Shop which is near campus. The two flavors of blueberry and glazed happened to be some of my favorite.

After some time eating and introducing ourselves we started asking some questions suggested to us in our preparation materials. The conversation started out with the same question as all the other Kentucky Kitchen Tables, “beyond voting, paying taxes, and following laws, what does citizenship mean to you?” Caitlin was the first to respond saying that citizenship is definitely beyond the bare minimum of what’s expected of citizens. She differentiated “good” citizens and “bad” citizens. Bad citizenship is doing bare minimum, only paying taxes and following laws. Though this is not necessarily being a bad citizen in the sense of actively harming the community, this group of people are not giving their part to the community. The “good” form of citizenship she described was the opposite the complete opposite. She emphasized some simple and good things we can do to be better citizens, for example getting to know our neighbors and volunteering our time to charitable organizations. These are steps that are achievable by most anyone and can be taken in small strokes. Caitlin told us about how she volunteers the first Wednesday of every month and makes sure to contribute to the community. Caitlin also mentioned that she saw a clear connection between what she does at the Honors College and how it helps her in her role as a citizen. By promoting the Honors College and helping fund the projects she does, her reach helps students, faculty, and community members alike.

Taylor -Grace and I agreed with everything she had to say relating it to our own Honors 251 (Citizen and Self) class. We both added how a good citizen should be able to talk about difficult issues with one another without letting our own beliefs get in the way of moving toward a common goal. I specifically mentioned how in my own community, I feel like rarely can citizens ever talk about topics with as much civility as our class. This was especially apparent in students from my own high school. Taylor-Grace went on to mention how the class reminded her GSP [Governor’s Scholar Program] seminar to which I agreed with her. In seminar, difficult topics were discussed in a way where we did our best to empathize with others even if they experience or opinion they were describing was different from our own. We both felt the class promotes productive and open conversation about issues that are pertinent today which I felt was reflected in the conversations we were having that night. I was constantly reminded of the article “How We Talk Matters,” where we discussed the importance of productive conversation. This conversation arrived when diverse and different opinions are used to fuel a multi-perspective argument rather than a divided and polarized view.

After that conversation seemed to have ended we went to the preparatory materials for another discussion question, and we then began to talk about some social issues that we felt were close to our heart. Caitlin was first again to say that she wanted to stop animal abuse here in Bowling Green relating it to her own dogs. I mentioned suicide and depression as many of those close to me have dealt with or continue to deal with the awful disease. I felt this topic was close to me because the answer is in helping others understand the disease and have more empathy for one another. When it came to Taylor-Grace, she couldn’t really pick just one issue so instead talked about an anecdotal issue in her hometown. The Winterfest Toys for Kids is a program that allows kids who would otherwise not gotten anything for Christmas an opportunity to get a gift. Volunteers shop from an open ended shopping list to get kids that gift under the tree. I and Caitlin both talked about similar programs in our own hometowns.

Afterwards, we dug into the question about the types of people we wanted to be in the future. Caitlin said she wanted to be the kind of person that people respected when they saw her. She was quick to clarify that it was not for popularity reasons and did not want to demand it from others. She instead described how she instead wanted to earn it through her actions so that those she has touched in her life can look to her and say that she is a respectable person. Taylor-Grace said that she wanted to be a good friend. She wanted to be the person that people can turn to in times of trouble and wants to live an open life. I said I wanted to be the person that is always growing and always learning. From day to day, week to week, and year to year, I want to be a better than the person I was before. I think there is something to learn from every day and something new to grow from just around the corner in my life. I can also see how the bridge can be useful in this context. In order to achieve the goals we have in life, it is crucial to understand not only one but both sides of “the bridge,” where one side is where we are at and the other side is where we want to be as a society/world. We need to understand who we are now and what are capabilities are so that we know what we our possibilities are, and the other side needs to be well defined and understood in so that you can approach life with a clear goal in mind. Otherwise you are aimlessly moving from day to day not approaching the goal in mind directly or efficiently. So you must know yourself and what you want if you want your dreams to become a reality.

We finished up the night by digging into the desserts. We kept on talking letting college, home, and just life frame each conversation jumping from topic to topic just letting the conversation flow. I’m certain we stayed longer than Caitlin expected, but the project turned into a unique growing opportunity to get to know two strangers better. I learned the simple power of getting out of your comfort zone to just enjoy the simple things about life like the kindness of strangers, the civility of a conversation, or simply delicious home cooked food! Overall, the night was one of wonderful food, wonderful conversation, and wonderful people.