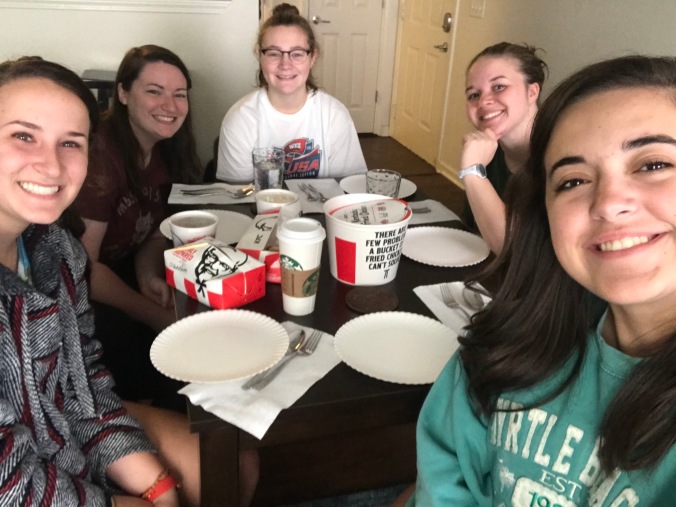 The Kentucky Kitchen table project seemed like it would be just another thing to add my to-do list. However, once I actually allowed myself an open mind and started to speak with my lunch guests I slowly become fond of the project. I did not know a few of the members of our meal, but quickly came to realize they were great people. We were able to speak about things that wouldn’t usually be brought up in normal conversation which allowed me to learn things about everyone that I didn’t already know. Because everyone had different backgrounds and future plans, I was able to see new perspectives on issues I thought I already knew all about. I feel like even after one meal together I have started a friendship with those that I had never met. These types of conversations and meals are important to expose yourself and your families to regularly so that you are open to new perspectives on everyday topics.

The meal took place here in Bowling Green. We ate around the kitchen table in my close friend, Jessie’s, apartment. I brought along my roommate and Jessie invited her two roommates who I had never met to the meal. Jessie is a graphic design major from Kentucky. She is interested in any form of art and has a true passion for visuals. She is also a dedicated women’s soccer fan and dedicates her time toward sports. While from a conservative, southern family she tends to be on the more liberal sides of political views. My roommate, Madeline is a conservative, Southern Baptist young woman who works hard in pursuing her goals of working in the medical field. Ashley comes from a close-knit family Western Kentucky. She is a psychological sciences major who spends time working in a lab. She is a Kappa Delta alumnae and is working on her master’s degree. Brooke has just started the nursing program here at WKU and spends her free time invested in sports. She comes from a busy family in Mississippi. I, Chloe, am striving towards becoming a nurse practitioner while being involved at WKU as much as possible: including being a member of Alpha Delta Pi. I am from a small, close knit community in Western Kentucky and have equally conservative and liberal views on political issues.

We started our actual discussion with the required question: beyond voting, paying taxes, and following laws what does citizenship mean to you? At first, none of us really knew how to answer this question. We are told all of our lives to be involved by voting, but that’s about it. Personally, I think that speaking up on and acting on issues you’re passionate about is a huge part of citizenship. We all agreed that, unfortunately, this doesn’t always happen as often as it should. It became obvious we all had the same main point: contribute to the air. Being someone and contributing meaningful things to your community and making changes for things you feel strongly about is something we all should do. Being the person who votes and follows laws but does nothing more than this isn’t truly a citizen at all, but really just a “filler”. The last thing we discussed about what it means to be a citizen is that it is important to leave something behind. Most of us agreed that as working people we strive to achieve great things and make change along the way. Without these marks and achievements left behind we would feel as though we hadn’t contributed our part to the world.

Eating dinner as a family was one of the biggest differences we had as a group. While myself, Brooke, and Madeline had never had the chance for uninterrupted nightly family dinners due to busy schedules, Ashley and Jessie always had dinner as a family. Ashley explained that this was often the one time that her whole family was together and able to catch up with the weekly events and how everything was going. She stressed that some of their best family moments came from these important, uninterrupted dinners and that she hopes to be able to do this with her family in the future. While the majority did not participate in family dinners, we engaged in family activities in other ways. Most of the family time we had was centered around sporting events or after school activities. These evets brought us closer as a family, but we lacked the undivided attention to each other that Jessie and Ashley got during their family meals.

One thing that most of us all had in common was our views on how to improve our lives with our neighbors. Jessie, Ashley, and Brooke often experience inconsiderate treatment form those that live near them and have taken these experiences to heart. Because of their constant frustration with their neighbors they constantly work to make sure they are the neighbors they want to be towards others. They have been unable to truly get to know their neighbors because of their differences but they felt like if they had a personal relationship with them things might be better. Madeline and I know the girls who live around us and have become friends rather quickly. We are all respectful of each other and consider their best interest because of this trusting friendship. The unanimous decision we made on how to live better alongside our neighbors is to treat others how we want to be treated. If their inconsiderate neighbors thought about this they would work harder to reduce disturbances and could then maybe spark a relationship with each other.

Through this discussion over a nice meal, I learned more than I realized. I learned that at the end of the day, regardless of where your come from or what your political views are, we all want the same thing. We all want to get along and get the most out of our lives in the best way possible. This is much easier said than done when dealing with busy family schedules and rude neighbors. I learned that when there is conflict between two groups of people, it cannot get any better without communication or the consideration of others situation. Jessie, Ashley, and Brookes neighbors will never change their behavior unless the other perspective. This could be fixed through a simple conversation explaining how this upsets them, but the conversation will never happen because of fear of confrontation. On another note, I learned what it is like to have a sit-down meal with friends. I was never able to have the experience of a discussion with family and friends over a meal and this experience has taught me how unique it is. It is more personal than a car ride with family or spending time with family at sporting events. I was able to see into each person’s life and what was important to them based on what they spoke about. Instantly we became closer because of sharing personal anecdotes and preferences and our hopes for the future. Not all of us agreed on everything, but that was okay. In a way, it made us more interesting and more real. We are all different but we work together so well to fit into the perfect puzzle.

The things I learned from this assignment fit perfectly into what I have learned in class. Many of the things I learned were about how to live well with others, one of our central class ideas. In class, we learn through discussion and readings that living with others isn’t all about you. We learn in “How We Talk Matters” that we often think that it’s “us versus them” but in reality, we are all us. This is often a forgotten concept; I myself forgot this concept. It came to us as such a clear solution to treat others how we wanted to be treated, so why can’t we do just that? It is hard to see both sides of a situation but it is one of the most important things we can do as citizens. Another central idea that this has related to is how we can have more say over our lives. To be a more involved citizen and make a change in our community is an active step in changing your own life for the better. To have more say over your life you must do more than simply vote and follow laws. Like we discussed during our meal, you have to actively work to achieve a goal or make a change. I learned plenty of things while eating dinner at a kitchen table and conversing with people who weren’t exactly like me. One of the most important things I learned was that I enjoyed myself and that keeping an open mind about people could open the door to new, great relationships down the road. Discussions and the exchanging of ideas and opinions in a respectful environment should be something that everyone has access to. This is something I have learned a lot form and that I hope I can continue throughout my life and introduce to others.