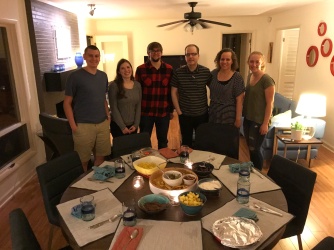 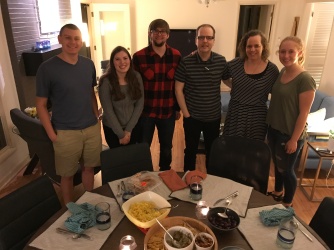 My experience with trying to set up a Kentucky Kitchen Table was a little troublesome.  Every dinner that I planned with my family, with my friends, or with my church got cancelled.  Starting to freak out about the deadline fast approaching, my teacher came to my rescue after I explained the situation.  She set me up with a family that she knew, faculty from Western Kentucky University, however, I had no clue of who these people were, nor the students that would be joining me.  I had to make my introductions and rely on my personality, as well as everyone else’s personalities to help get me through this dinner.

My Kentucky Kitchen table took place in a lovely home in Bowling Green, Kentucky.  There were seven of us in total and every one of us had a different background than the rest.  The first person I met was the man of the house, David.  David teaches creative writing at WKU and he supposedly always keeps a pen and/or pencil on him at all times in case he has some kind of revelation or spark of creativeness that he must write down.  Next, I met the lady of the household, Molly.  Molly is a writer as well; she has written several books.  Molly and David had a couple of guests as well that stayed for the dinner, Samantha and Kaitlyn.  Kaitlyn is currently a junior in high school from Washington D.C.  Her mother is good friends with Molly and David, so they asked if Kaitlyn could stay a couple of hours so that she could bring some outside diversity to the table.  Kaitlyn is interested in attending WKU after she graduates and major in photojournalism.  Samantha is currently a high school student from Bowling Green.  She was described by Molly and David, “like our adopted daughter.” She plans on going to college in Washington D.C.  Next came in two honors students from WKU, Josie and Hunter.  Josie is currently a freshman at WKU all the way from Marietta, Georgia.  Josie is currently majoring in Communication Disorders.  Josie had just toured the campus on a whim with her father and fell in love with the campus, so that is where she stayed.  Josie brought in a huge arrangement of cookies that she made from scratch in her dorm.  Hunter is currently a junior at WKU and he currently lives off campus.  He is a Kentucky native, like me, from Harrodsburg and he is majoring in biochemistry.  He brought in several beverages such as sprite and sweet tea.

The dinner started off with an appetizer of cool ranch Dorito chips with spinach dip and salsa, however, everyone was so nervous because no one knew each other, that only Molly and myself ate the chips.  Starting out the conversation was very awkward.  We were sitting around the living room in a circle with hardly anyone speaking.  David knew this so he became the comedic relief.  As he made jokes and the group started to lighten up and finally began conversing.  We started out by talking about the community of WKU and how it has the reputation of being a party school.  Molly and David asked us our thoughts as honors students whether or not we saw the party life much or if we stayed away from the scene.  We all agreed that we ourselves never saw the party but we knew those who did. I told of how the tenth floor of my building was known to be the party floor.  The going joke for the rest of the night was “don’t go to the tenth floor!”  We asked Molly and David one of the Citizen and Self class questions of the class on “how do we make our community a better place in regards to the party life on campus?”  Their advice to us was to stay away from the party life and work to make studying a priority.  They said that the more of us who work to stay out of the party life and worked towards making a life for ourselves, the better the campus would be because of it.  No longer would people come because it is the number one party school in the state, but more would come for the academics.  This reminded me a lot of the Paying for the Party reading that we read in class.  That college is divided up into two different categories, those who are there to party and those who are there to study.  Most of the time these two kinds of people do not mix well together, and often time they to do not interact at all or the two groups go head to head a lot.  This makes sense as to why us being honors students, we had never seen the party life.  We continued to talk about how we might better the campus through getting involved in different clubs and student government.  Trying to be involved and taking an active role was a huge part of the evening.

Finally, after an hour of sitting around the coffee table, we moved on to the dinner table.  Molly and David had prepared two bean lasagnas as well as an arrangement of fruits and rice.  As we ate, I jokingly asked if it would be alright if I recorded the conversation of the dinner table.  That became another ongoing joke for the rest of the night and I was called the spy for the rest of the night as well.  For the next hour and a half as we ate we contemplated the required question, “What does citizenship mean to you?”  Molly and David’s answers were similar to their answers about the party life.  They continually talked about the importance of taking a part in your community.  Playing an active role in your community.  Going out and campaigning for the things that you’re passionate about and helping make the world, especially your community, a better place.  They talked about the importance of helping out those in need, helping out your neighbors, and getting to know your neighbors so that you can help ease their problems.  However, they also said that being an active citizen is different for everyone because not everyone has the time to do all these things.  They told us that the different ages have different parts to play in citizenship.  That the young have more time and energy on their hands and that they can still work and volunteer more, whereas the older generation have less time and more money so they can donate their money instead of their time.  But everyone needs to donate something.   And these things weren’t all you can do.  “Now, you’re recording this still right Brady?” David asked.  Molly and David were the living embodiment of everything they talked about.  They had campaigned, they had helped out their neighbors, and they gave money to charity whenever they did not have the time to volunteer themselves.

Our dinner may not have been incredibly insightful, but it definitely was one of the most interesting and one of the most diverse.  We had people from all over the east coast represented in our dinner group.  We had two from Indiana.  Three from Kentucky.  One from Washington D.C. moving to Kentucky.  And one moving to D.C.  All of us from different walks of life that found each other for this one night to discuss citizenship.  That is something special.  Each of us changed a little there that night I think and I am thankful that the rest of my Kentucky Kitchen Tables got cancelled, so that I could spend my Monday night with these wonderful people.  At the end of the dinner we had been there talking for over two and a half hours.  I went in dreading this experience of meeting these strangers, and I came out having a new and exciting outlook on citizenship.  Not many people can say that about their Kentucky Kitchen Table.  None of us wanted to leave that night, but alas all good things must come to an end.  Thank you, Molly and David, for having us that night, you truly made it a wonderful night and experience.  “Recording over.”