On Tuesday, March 28, 2017 I completed my Kentucky Kitchen Table. At first, I was not sure what to expect from the dinner. I wondered what kind of diversity I would find at our table. However, I found that there was a diversity of thought that was compelling, and I appreciated those thoughts which were in contrast to my own that gave me a new perspective. I ended up leaving with a greater sense of the purpose for the role I may play in our community. Among some of the topics we’d touch on, from various forms of discrimination and racism to leaving home for the first time, I felt empathy and sympathy—both for the characters described in stories of hardship and for the people sitting around the table with me. More than that, I felt optimistic for the future of our community because of the honest candor with which the others sitting around the table would express sentiments similar and dissimilar to mine. If we can continue to connect with people in the community in this way, there is certainly a pathway for progress.

The dinner was hosted by Leah and Chris who prepared tacos and other Mexican-style dishes for dinner. The WKU students at the table were myself, Victoria, and Gage. Victoria is a Spanish and Asian Religions and Cultures double major. She is also a member of the Chinese Flagship Program and has an interest in learning more about diverse cultures and ideologies. Gage is a student at WKU studying Economics. Leah works for the Center for Citizenship and Social Justice (CCSJ) and is very passionate about social issues. Chris is contractor who works in Nashville. Also, attending the dinner were McKenna, who is a senior at Bowling Green High Schoo, her boyfriend Cole, and Riley and Katie who are in middle school.

We began by talking about what citizenship meant to us. McKenna views citizenship as having rights, which are earned by being an active member of the community. To her, being a citizen is to have a house and to be able to go to school and get an education. As we discussed our views on citizenship, I envisioned the “bridge” metaphor that we often discuss in class. McKenna seemed to be focused on the right side of the bridge, which is where we want to be as a society. In other words, McKenna was saying that ideally we want to be able to live well together and have equal rights to the resources that are essential to our survival—like shelter and education. However, that is not the reality. Leah, through her work at the CCSJ, has had the experience to know that there is still much inequality in our society, and there are many people who are given less resources. Those people must work harder to have the life many of us are freely born into. She’s realistic about the hardships that many in our community face; she said, “It’s because I know what exists.” Leah described a situation where a fireman in Bowling Green was asked to resign from his post for perceived gayness. She also went on to note an article which cites dozens of criminal acts against people of different sexualities. She said, “there’s an obvious problem if a citizen employee can’t go to work without being harassed and picked on.”

As far as how we as citizens and as a community must get across the metaphorical bridge to become a more equal society, Leah had many ideas. She said, “Citizenship to me is being active in the community in some way, shape or form. There are numerous avenues where you are able to do that…reaching out to legislators, going to marches and protests.” She noted, too, how lately she’s seen even more citizens being active in the community during this past election season. Optimistically, she said, “I’ve been amazed at people working at things if they don’t like it…participating, going to city commission meetings, writing letters to the editor.”

I had a different point of view. I had difficulty seeing how certain protests and marches would really enact change because to some extent I felt as though protests were only dividing our country further. I think about what the “other side” (the people of the opposing viewpoint) will do in response to protests, and I wonder if these protests are effective in getting them to have a new perspective. Just as Keith Melville describes in “How We Talk Matters,” people often dislike conflict and also are so self-ensured about their opinions that they are unwilling to listen to others’ experiences and even to correct, factual arguments. Unlike Leah, I did not see protesting in particular as a particularly productive way to make progress in society because I worried that protests discouraged conversations between one side and the other on political issues. However, through my conversation with Leah, I realized that while protests themselves may not seem like a potential platform for an effective deliberation, they are a way of starting those conversations and engaging the community in a healthy discussion. The protest is simply a  spark for many deliberations to come. It forces people who witness the protest to look at the issues and to talk about them.

During the dinner, we also discussed different social issues, specifically those that were the most meaningful to each of us. Chris said that when it comes to social issues, people tend to think of “hunger, African children, third-world countries, but there are areas of our countries that do have hunger.” Chris feels the social issues here more personally because of the experiences he has in his life.  This discussion reminded me of a point that Ivan Illich made in “To Hell with Good Intentions” where he discouraged missionary work abroad. Similarly, Illich says, “If you have any sense of responsibility at all, stay with your riots here at home.” Here, Illich alludes to the issues that come up when people try to do good abroad, and fail to do so often without even realizing it. It makes more sense to focus on the problems we are experiencing within our own communities, where we can communicate well with the people we are trying to help and we are more likely to understand the issues when we have experienced them or seen them happening in our own communities.

While for the most part, Katie and Riley were silent on certain topics, Katie spoke up when we began talking about the obligation we have to people in our community to give them more of a say over their lives, like we often discuss in class. The overall consensus was that we do have an obligation to the people in the community who are less privileged and who have been born into their disabling circumstances. Katie gave the example of homelessness, a situation where, she said, “It’s not their fault if they’re homeless. We have more opportunity—it’s the right thing to do.” Chris supported Katie’s view. In his experience, working in construction in Nashville, he sees many Hispanic workers struggle to get access to health care because they’re illegal immigrants and are afraid to even deal with the government at all. Like Katie, Chris also said, “If you’ve been born into circumstances, I’m inclined to have a lot of empathy for [you].” Throughout this discussion, there was a theme of empathy and a call to service. However, we did not discuss how Katie and Chris might act on such calls to service. From this conversation, I learned not only that I’m not alone in my feelings of empathy for the underprivileged but also that I’m not alone in my inability to take that next step to help those in need. I suppose all of us feel these calls to service at one point or another and yet are unsure how to act. I believe this is due to the great complexity of these “wicked problems,” which are so large in scope and difficult to tackle that even those with the best of intentions may not have the time to dedicate to finding solutions to those problems.

While I tend to be more cynical about the issues we are facing today in our communities and in our country, this dinner made me feel more optimistic because even by being there I felt like I was engaging with the community in a new way. To sit down and discuss social issues with complete strangers and to come out of it having learned many valuable ideas, I think it will not be too difficult to contribute to my community in the future. I often unconsciously brush off responsibility for these issues because they honestly seem too large for me to tackle. However, throughout the course of this semester by discussing these issues in class and during my Kentucky Kitchen Table, I realize that not only must I own my obligation to my community, but also that I am able to do something even if it is simply by starting the conversation with others in the community. As Melville says in “How We Talk Matters,” these conversations “in town halls, in classrooms, among neighbors, or exchanges that take place over dinner tables” are where democracy begins. 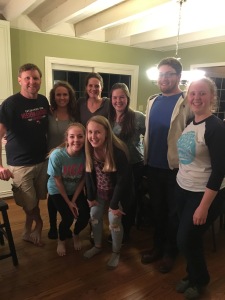