For my Kentucky Kitchen Table, I decided to host mine in my hometown of London, Kentucky which is roughly two and one half hours east of WKU. Leading up to my Kentucky Kitchen Table, I was honestly a little bit nervous about the conversations that were to come. Generally as a rule, I have been taught not to bring up politics, religion, or any other sore subjects at the dinner table. The night of the meal however, I was going to do just that. I also didn’t want to ask anything that would make anybody uncomfortable. To my relief, everybody at my meal was really cool and very honest about each of the topics I brought up. It also helped that whenever there was a small lull in the conversation, one of my guests was ready to step in and get the discussion going again. Let’s meet this delightful cast of characters.

First, we had a woman named Juanita who went to high school with my mom. She used to be employed in social work, but now she taught social work classes at Eastern Kentucky University. Juanita has a Baptist background. With Juanita was her husband Bill. Bill was the lone atheist at the table and he worked as a security guard. Bill is always a fun guy to be around as he always makes conversation livelier. Sitting next to Juanita was a very good friend to my family and me. His name is Alex. Alex has a degree from the University of Kentucky in chemical engineering. This fall he will be going back to school to get his doctorate in chemical engineering. He’s a smart guy. Although growing up Baptist, Alex is very open to religious diversity having attended different denominational churches. In fact, while he was at UK, he attended a Methodist Bible study. To the left of Alex was me. I grew up Baptist but I also attended many different churches. I really try to promote an atmosphere of religious and all-round diversity and acceptance. I am a freshman at Western and I began my college career studying mechanical engineering. I recently changed my major to strategic marketing however, and will begin taking business classes next semester. Beyond that, I am a very creative person and I love writing music and performing on stage. To my left sat a couple that I respect quite a lot. Their names are Dan and Debbie Eubanks and they moved to Kentucky from Missouri about five years ago. Dan and Debbie came to London because Dan was employed at my Baptist home church as our discipleship pastor. Dan and I instantly became close friends because of our shared dry sense of humor. His wife Debbie is also very involved in the church and is a very kind-hearted person. Ever since I have known them, Dan and Debbie have been great role models for me in my walk with Christ. To Dan’s left sat my cousin Donavon. Donavon just graduated from Union College in Barbourville with a degree in history and political science. He was also there on a soccer scholarship. How cool! He actually just landed a position to work with a very prominent politician in the state. Donavon’s church is non-denomination and is inviting of people from all denominations. Finally, next to Donavon was his girlfriend Destiny. Destiny grew up Baptist, has a degree from the University of Kentucky, and now is in social work. In her job, she helps put troubled kids with a good influence that also has similar interests as they do.

We had some interesting diversity at our table which brought fresh perspectives. For example, Dan who is a pastor sat across from Bill who was an atheist. We had generational diversity as well. Juanita and Bill are in their forties; Dan and Debbie are in their fifties; Donavon, Destiny, and Alex are in their twenties; I was the youngest of the bunch at eighteen. We also had a mix of republicans and democrats.

At the beginning of the meal, after we made our plates of course, I got the conversation rolling with my first question. “Beyond voting, paying taxes, and following laws, what does citizenship mean to you?” Because this was the first question and the guest were just beginning to get to know each other, it took a few minutes for the conversation to hit its stride. The table came to a consensus that it meant being a good person and having a positive influence on society.

Next I asked, “What social issue is closest to your heart and why?” Destiny said that this question was bringing out her inner social worker which resulted in laughter from around the table. She said through her work, she believes that a child coming from a home with a parent in prison for any amount of time has a major affect on them and that this is an issue not many people think about. Everyone at the table seemed to agree with her and we listened to her talk about working with children from this kind of background. During this particular conversation, I explained to everyone a concept I had been discussing in Citizen and Self called wicked problems. I told them the characteristics of wicked problems and gave a couple examples and said how the problem aforementioned by Destiny could be referred to as a wicked problem.

I noticed that after each question was answered, the conversation would come to a slight halt and people would wait for me to ask another question. I wanted the conversation to be natural so I told everybody to just talk about whatever they would like and I would occasionally ask another question. I wanted to be sneaky when bringing up the issues I wanted to discuss, so I slyly slid them into conversations. I overheard my mom talking to someone behind me. She was bragging on me which she like to do because let’s face it, I’m pretty cool. She was telling them about the part of the dinner I prepared which was the potatoes and the dessert (see a picture of the desserts below). I wasn’t the only person at the table at my table and I repeated it and effortlessly slid in my next question. I said, “Yeah, I made the potatoes, the dessert, and what kind of community do you want to live in?” Laughter ensued. After the laughing died down and several guest commended me for my efforts, Juanita answered the question and hit the nail right on the head. She said she would like to go back to a community where people would sit on their porches in the evening, you could leave your door unlocked, and people were friendlier. The table also agreed that we wished there could be more face-to face interaction rather than just texting and social media.

The conversation shifted for a few minutes to Donavon’s new job working for the prominent politician. After a few minutes, it was time to bring up my next topic. I waited for my chance and took it. “Hey, Donavon, now that your working for {prominent politician}, do you see your job as serving a greater purpose?” Honestly unintentionally, this time my segway actually made sense. I added that this question was actually intended for everyone. Destiny said yes. She said that she believed she was helping troubled kids get help they needed which ultimately served a greater purpose. Juanita also said yes because she was helping educate a generation of young adults. Donavon also said yes as he was helping a young, honest politician rise up so they could help people all around the state. The consensus around the table was yes although because Dan is a pastor, we joked that Dan wasn’t serving any greater purpose.

The last question I asked was, “What advice would you to people running for office in our country?” Although we joked at first and said they should lie and do whatever it took to get to the top, we eventually came up with some good answers. Everyone gave a good answer to this question. We discussed Dan’s answer, which was the most specific, the most. He explained that they should abolish Amendment 16 which would get rid of federal tax. This led to a small political debate before I gave my answer. At the end of the political discussion, I said that the ultimate goal of a politician running for office or anyone for that matter should be to help as many people as possible.

In Citizen and Self, we have done a lot of discussion about how beneficial deliberation is. During my Kentucky Kitchen Table, I really got to see a real-life version of this. It was very nice to sit around a kitchen table, eat a home cooked meal, and civilly discuss issues important to everyone at the table. In class this semester, we had a reading called “How We Talk Matters”. In the reading, Keith Melville points out that listening and deliberating allows issues to be solved rationally. This really proved true during my dinner. Further, I learned that when you bring people of different backgrounds together to discuss issues, you get a wide variety of solutions as well as different perspectives on the problems. Originally, I was only hosting the dinner because it was for a class, but after doing it, I would love to do it again sometimes. In a digital world, it is so relieving to sit around a dinner table and just talk to people, especially when it’s over a good meal. 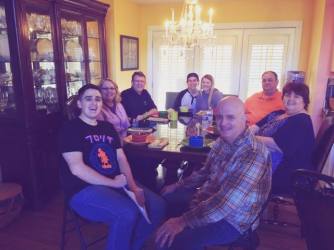 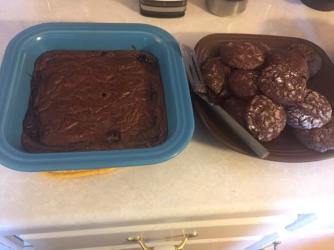 The dessert I made!