For my Kentucky Kitchen Table project, I decided to go back to my home in Springfield, Tennessee to have the meal. I chose to go home for this project not only because I knew it was where I would feel most comfortable, but also because I am moving to a new house in the next three days. I wanted to have one last formal meal in the house that I have grown up in for the last fourteen years. Although it was bittersweet to eat one last meal in my home, it was also a great experience that I learned a lot from.

I had a very interesting and fun group of people attend my Kentucky Kitchen Table. My mother Fonda, my younger brother Caleb, and my aunt Karen were some of the participants. My mother also invited two of her co-workers whom I had heard about, but not met at that point named Odaylis and Gelissa. These two women have very similar backgrounds that have helped them bond and become best friends. Odaylis, who recently became an official American citizen, is an immigrant that spent the first part of her life living in Cuba. She traveled to the states with her mother and grandmother, and now lives with her husband of two years who hails from the Dominican Republic. Gelissa on the other hand was born and raised in the United States. However, her mother’s side of the family is also of Cuban descent, while her father’s side of the family is African American.

Before starting the project, I was very worried that it would be hard to make the conversation flow. I was afraid that it would just be question after question answered with simple answers. However, that was not the case at all. It seemed that after the first question was asked, we just kept talking and talking. The conversation flowed so well that I often had to steer the conversation back on track. I started by asking the required question about citizenship, and being a new official citizen, Odaylis gave one of the best answers. To her, citizenship was of more importance than to a person that was born in the states and automatically labeled as a citizen. She thinks that being or becoming a citizen is about being apart of something bigger than yourself. She goes on to explain the benefits and the sense of inclusiveness that come with officially becoming a citizen. Somehow, the conversation went from discussing citizenship to discussing how to expunge certain behaviors off of criminal records. This conversation had nothing to do with any of the questions asked, but the information was very entertaining and overall useful.
After getting back on track, we next talked about the importance of community. Like earlier in the citizen question, overall inclusiveness seemed to be the theme. My participants also noted that they wanted to be a part of a community that was safe, open, friendly, and diverse. My mother went on to explain that these were some of the key things that she looked for when purchasing the new house that we are about to move to. Diversity and safety are important factors to her when choosing a new home because the neighborhood where we currently live is not diverse in the slightest.

Next, we discussed the importance of the job that my mother, Odaylis, and Gelissa do. They work for a healthcare company known as Bridges to Care. Again, the theme of inclusiveness and equity was brought up again. Everyday these three women strive to provide healthcare to individuals that my mother describes as “ people who have not been treated fairly”. She goes on to explain that these are usually people that don’t have any health insurance, not official U.S. citizens, and are also very poor. Because of this, these people are treated differently when they go to seek any kind of medical care. “ The bulk of our job”, she explains, “ is about making sure that people are treated fairly and are able to receive the services that everybody else receives”. Odaylis explains that she thinks that there line of work is important to her because in most cases, the people that come to Bridges to Care are all out of options. Bridges to Care are the only ones that will be able to help these people get the services that everyone deserves.

If I had to pick an overall theme for my Kentucky Kitchen Table would be inclusiveness. I think that inclusiveness is the key to one of the central course questions, “How do we live and work well together”. When considering plans that will help people of different backgrounds and different beliefs live well together within a community, it is important to make sure that everyone’s opinions, beliefs, and ways of life are taken into consideration. 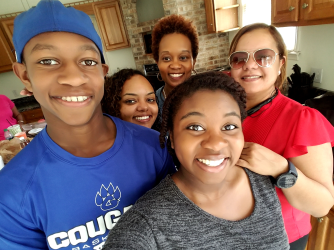