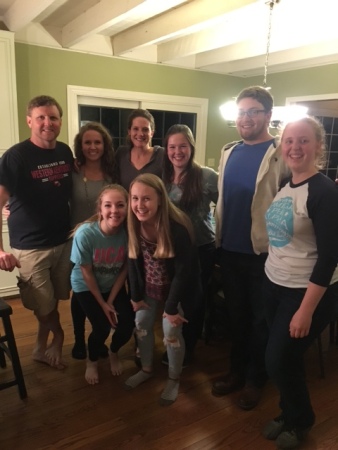 On March 28th, I went to a lovely dinner at a family’s home in Bowling Green hosted by Chris and Leah. I did not know this family before the dinner, however, we all got to know each other during our meal. It made me feel like I was at home having dinner with my family. The family was a unique family in that both Leah and Chris had two daughters each and they were the same ages. They both have a daughter that is a senior in high school and a daughter that is a freshman in high school. Chris’s daughter’s, MacKenna and Riley, were present for the dinner, and one of Leah’s daughter, Katie, was also in attendance. Leah’s oldest daughter was, unfortunately, unable to make it though.

Chris, Leah’s fiancé, works for a construction company out of Nashville. He was originally from Michigan but moved to Bowling Green to pursue work. He contributed to the diversity of the group because of the many different types of people that work for him. His experiences working with them and hearing their perspectives on many different social issues allowed him to provide us with different perspectives in our discussions. His oldest daughter, MacKenna, is a senior at Bowling Green High School. She plans to attend Western Kentucky University in the fall with a major in something in the medical field. MacKenna’s boyfriend Cole was also present at the dinner with us. He, too, is a senior at Bowling Green High School, however, he did not plan on attending college. He is an outdoorsman who spends a lot of his time in the outdoors hunting and fishing. Chris’s younger daughter, Riley, is a freshman who also attends Bowling Green High. She plays soccer for her school.

Leah works on Western Kentucky University’s campus at the Social Center for Citizenship and Justice so she has a pretty good understanding of the social issues in our community as well as around the world. At her job, she is involved in many things trying to help the citizens of Bowling Green. When asked about her opinion on the biggest social problem here in Bowling Green, she talked about the refusal of many immigrants to seek healthcare, among other things. This was ironic for me because health care is the focus of my group paper and the local immigrant populations refusal to go to the free clinics are a major problem.There is a high immigrant population in our community, and many of those immigrants are afraid to seek medical care because they do not have proper identification. Leah’s daughter, Katie, was the only one of her two daughters able to make it to the dinner. Katie is also a freshman at Bowling Green High School. She is a cheerleader for the school as well.

Throughout the wonderful taco dinner, we talked about many things, from citizenship to the community to the city of Bowling Green. The first question we asked was about citizenship. We asked, “Beyond voting, paying taxes, and following laws, what does citizenship mean to you?” The two younger daughters answered first, saying that being a citizen, to them, meant reaching out to other citizens and participating in marches on protests to share what you feel is right. Leah said that the biggest ways to get involved as a citizen in her opinion is by doing things such as attending a city council meeting or writing a letter to the local newspaper editor. Leah also commented that this is the most active American citizens have been that she can remember. The women’s marches and civil rights movements throughout the United States are very prevalent, and they are an easy way to get involved as a citizen. We asked if they thought they had an obligation to their community, Katie responded by saying that some people do not have the same opportunities as us and that it is our duty to help them. She also said, “it’s the right thing to do”. This relates to the class because it shows a sense of wanting everyone to live well together. She admits that the best way for her to help these homeless people, immigrants, starving children, etc. is by doing all that she can to make their lives better and that is an example of trying to live well together. It exemplifies her caring for others and wanting to improve their lives, not just her own.

One of the students also present at the meal, Victoria, talked about her experiences at Western. Victoria is a member of the Honors College at Western. She says that the campus makes her feel at home, similar to Bowling Green as a whole. It is a very welcoming community that makes individuals feel less like a statistic and more like a person. She loves that Bowling Green is a refugee resettlement city. It shows how accepting it truly is and how our community wants to help people, whether you are from another country half way around the world or have lived here your whole life. Grace, the other student at the meal, is also an Honors college student and her major is photo-journalism.

During the dinner, I was able to learn more about the residents of the city and some of its biggest social issues. Leah, having worked at the Social Center for Citizenship and Justice, has seen many of the hardships that have happened throughout the community as well the positive impacts it has had on lives. She talks about rights towards people who are different from others in the community and it makes you wonder how truly accepting Bowling Green is. She has seen many cases of homosexuality causing disruptions at workplaces. One of the worst scenarios she has to deal with, an openly homosexual member of a primarily Christian workforce was asked to resign because of his sexuality. That is one of the areas where she believes Bowling Green could better accept members of the community.

Talking with their family helped me to understand the city’s residents much better. Being from a small town, Bowling Green has always seemed like a big city to me. After I moved up here though, I realized that some of its residents are ready to move away as quick as they can. MacKenna’s boyfriend, Cole, said he had lived here his whole life and when we asked what he liked most about Bowling Green, he couldn’t think of anything. He was ready to move away to somewhere small like where I’m from and live out in the country away from cities.

We also had a very interesting conversation on favorite types of food. Everyone at the table had a different favorite food, however, about half of the people there’s favorite foods were some kind of foreign food, whether it be Mexican, Japanese, Chinese, or Thai. I think everyone being able to have a variety of different foreign foods speaks to the diversity of Bowling Green.

The dinner table was comprised of a very diverse group. That diversity being comprised by different experiences, generations, and geographical identity. Chris, being from Michigan, has been influenced by the people in Michigan. Me, being from an extremely small town, was able to recognize different positive aspects of Bowling Green that they might not have noticed since many have lived here or in a similar town their whole lives. Chris and Leah were able to add another different perspective to our discussions due to generational difference.

The dinner was very relatable to the class. The most relatable reading to our dinner is Paul Bloom’s “The Baby in the Well”. This is because of how much empathy the whole family showed in regard to world hunger, homelessness, and even social issues here in Bowling Green. When problems live starving children in Africa, their moral intuition immediately kicked in. They said they wanted to help them, which is the right thing to do, but most of the time we tend to ignore wicked problems such as those that seem to be never ending. Like the Sandy Hook incident, our society tends to focus on social issues that are new or more televised such as the women’s marches rather than something that’s always there but never really noticed like world hunger.

My experience with their family allowed me to understand more about them, and the citizens of Bowling Green. I learned about their diverse beliefs in regard to many things, such as citizenship, social issues, and the city of Bowling Green. I learned of new social issues in Bowling Green such as the sexuality discrimination in some workforces. I learned about some things that people could dislike about living here in Bowling Green while also, hopefully, shedding new light on the many positives that come with living here. This assignment allowed me to experience a family meal, which as a college student away from home does not happen much. It was a very enjoyable experience, they were very gracious hosts and this assignment allowed me to learn more about my community as well as the people in it.