This dinner took place in Bowling Green, Kentucky at my German Professors house. For dinner, Laura provided the schnitzel, salad and potatoes, but we had to cook them together in small groups. I did, however, bring chocolate as a gift to Laura for hosting this dinner, and Alex brought two pies as dessert. The dinner was attended by Laura, Heike, Julia, Alex, Ryan, Carlos, Maggie, Eric, Jack and I. Laura is my German professor and the department head of modern languages at Western Kentucky University. Heike is an English teacher from Germany who had come over with her students to Bowling Green for a few weeks. Julia is an instructor of Russian at Western Kentucky University. My classmates are of a diverse background as well. Carlos is a Mexican-American from Indiana who is studying mechanical engineering and German, and Maggie is a Chinese-American who is studying German and Chinese in order to be a translator after college. Ryan is studying German and Computer Science, and Alex is studying German and International Business. Erin is studying German and International Business, and Eric is studying Architecture and German. Jack is also studying German, and he recently came back from a semester in Germany. I myself am studying German and Geography. Since nearly everyone at the kitchen table had several years’ worth of experience with German, one of the topics that often came up in our dinner discussion was the difference between citizenship and politics in both the United States and Germany.

As we initially sat down for dinner, the table was relatively quiet. Eric was the first to bring up recent news to the dinner table, speaking about a recent political move made by President Trump to build the wall between the United States and Mexico. There was a shared sentiment of disapproval about Trump’s actions in the White House at the dinner table; however, Carlos, being Mexican-American, quickly called out the absurdity of the plan, noting that the proposal of building a wall between the United States and Mexico was not American. At this point, I thought it would be an appropriate time to ask everyone what it meant to be American. Everyone there had a different idea of citizenship, but there were recurring themes of opportunity and egalitarianism throughout each person’s opinion. Carlos held the belief that being a citizen entailed having the opportunity to speak and move freely and the right to pursue happiness by one’s own accord. He particularly emphasized examples in history of the importance of the right to pursue happiness, such as Mexicans immigrating to the United States to work so that they could better support their families. I supported this notion by stating that many of the anti-immigrant sentiments in the United States are based on scapegoating when in reality Latin American immigrants often work jobs that the typical person in the United States would refuse to. Ryan iterated that the United States was founded on the ideals of living one’s life the way they choose to, though he also added that the United States has an interesting quality regarding citizenship compared to the rest of the western world. It was his belief that the United States was the most individualistic western country, and that this affects how many citizens of the United States see themselves as Americans. Afterwards, Heike added to the topic, mentioning how a more collectivist attitude towards social issues exists in Germany and the rest of Western Europe. This means that while there are more government laws for assisting people, there is also more order and less free speech due to Germany’s troubled past.

The conversation shifted towards politics after talking about citizenship, as Jack recalled the current widespread malcontent with politicians currently. This brought the wide spectrum of political beliefs present in the United States to the dinner table. Virtually everyone at the table was disappointed with the current administration in a multitude of ways, which I didn’t find too surprising honestly. It did, however, become more interesting when Alex brought up the cause of the election’s results. He mentioned that the divide between rural and urban America has stratified our country, and that to move forwards the nation would have to first take an introspective look as to how we are all united as Americans, rather than divided. In agreement I replied that there appeared to be more challenging economic problems in areas like Appalachia and the Rust Belt, which a person living in an urban area would not understand. Jack noted that living in general has become more expensive, and that many well-paying jobs that once existed in rural areas are now gone. As we were all sitting at the table and pondering the situation, Ryan said that while the situation regarding work and economic prosperity looks somewhat grim at the moment, the same situation of a debilitated economy has happened several times before in the United States history, and that the tough conditions facing Americans today would, in some form or another, be overcome. The dinner was over shortly afterwards, though there were a few additional discussion topics that I felt taught me.

There were a few highlights from the night that I feel are worth mentioning in greater detail. My German professor, Laura, made an excellent point as to how the education system has evolved over the past fifty years. Where the University experience was once far more academic in nature, it has become more similar to a business model, since Universities now compete to get the best students by having the most amenities and accreditation. This, she noted, has heavily increased the cost of college, along with the increased need for a post-secondary education to obtain a fair-paying job. Many well-paying industrial jobs that one could obtain once they were finished with school are now gone, and the United States economy is increasingly based on service jobs, which are either minimum wage jobs or professional jobs. An important perspective on citizenship in different cultures came from Maggie, as she shared her opinion on the differences between Chinese and American culture. She remarked that there’s a higher sense of duty to one’s family in China than in the United States, and that this sense of duty will often manifest itself when decisions for the children are made. Parents are willing to sacrifice much of their own happiness for the sake of their child’s future. This resonated with me, as I had never heard a firsthand account of what life is like in China, where the cultural values are fairly different than in the United States. A final point that I found intriguing, though not in the main discussion around the dinner table, was a point brought up between Julia and Ryan, as they discussed learning Russian. Everyone at the table knew German to some degree, but Russian was familiar only to the two. It became very interesting as they talked about the varying contexts between Russian and German, agreeing that Russian is a higher-context language than German, which meant that the language is worded more implicitly. Although this small section of conversation wasn’t related to the rest of the discussion about citizenship and politics, I found it to be interesting on a more personal level, since I never really examined languages outside of my native English and German.

Of all the subjects we talked about in class, this dinner most reminded of the readings on global warming. Everyone at the table agreed that there were new political and social issues facing the world, but everyone seemed to have a different solution – or lack thereof – for the problem. The instructors, Laura, Julia, and Heike all seemed to agree that learning a second language is an important avenue towards higher intercultural sensitivity, which is important for citizenship in the 21st century. The other students and I had varying opinions on the meaning of citizenship in our modern world.  I, like Michael Pollan, admittedly had the bleakest outlook on the future. I feared that the world was going to be increasingly put under pressure by corrupt government and corporate rule which would limit our freedoms and force a more totalitarian system upon us. In short, I found that any good we could do as active citizens would be mitigated by forces on a larger scale. The other people attending the dinner, however, were not as cynical as I was. They came to a general consensus that through active citizenship and critical thinking, this generation would be able to overcome the pitfalls that impeded progress in the last two. One of the bigger ideas in class I feel this dinner alluded to was one of the three main questions: “How can we have more say over our own lives?” It seemed as though most of the conversation revolved around plans for the future and current global issues, with a heavy emphasis placed on what may happen to the world in the near future. While we couldn’t come to a conclusion as to what the future held, I think everyone at the table enjoyed the dinner and the conversation that came with it on this night. 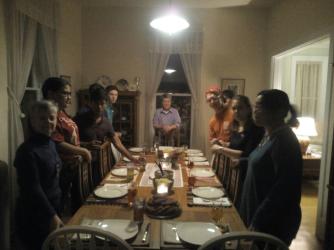