Last week I had the pleasure of sitting in and sparking conversation with a whole host of new company. Mary and I were welcomed to dine in the home of Keaton, Kat, and Tori. Joining us were fellow friends of theirs, Andrew, Gabby, Hayley, and Ashlyn. One benefit of being the new member of this diverse friend group was that each person got to paint themselves in whatever light they wanted. When asked how they liked to be described the answers involved both physical characteristics and core values. Andrew likes to be seen as a very tall gentlemen who was raised in Tennessee and has a background with horses. Gabby unlike the rest expressed one of her fatal flaws by stating she get ‘hangry’ quiet often, a slang term coined to express anger brought on by being very hungry. However she is fairly quiet at first but opens up when surrounded by familiar company. I am glad she was surrounded by friend too because she had great insight into some of the prompted questions. Hayley wants to be known for her humorous side which relates to her idea that she is fun to be around, which I can second after being in her company. Keaton most admirable qualities consist of her dedication and passion to do the right thing while keeping a positive outlook. Ashlyn in proud of her big smile and described herself as an avid extrovert. Hayley on the other hand is more meek and but will defend her point of view in a respectable manner when she feels necessary. Tori said that she is known for her candor and loyalty, never afraid to speak her mind, which added a lot to the discussion. All though it was a female dominated group a great source of diversity was found in the political views, social economic upbringings, and religious affiliations of the people sitting around the dinner table. Even after hoping in with different questions the unavoidable and controversial political debate which is so prevalent at this time dominated conversation.

However, the fundamental question of our class was what initially facilitated conversation. When asked, “What does citizenship mean to you?” Andrew started by answering very straight forward. He said it means doing your part and being good others. As I suspected the first answer would only scratch the surface of a more in depth answer but I was appreciative he was the first one to step up to the unorthodox table topic. Tori seconded Andrew but slightly caught on to the fact we might have been looking for something deeper and added that citizenship means being able to have a voice in society. She went on to express different ways she’s involved. By being involved in community through big or small parts you have a voice. She is involved in intramural sports and a sorority and volunteer work which makes an impact on the way society functions. After others expressed similar opinions that related to different ways each of them is involved and the way they give back, Mary steered conversation by bringing up a similar question, “What kind of person do you want to be?”  Regardless of what setting Mary and I would have been in, I think this question is what brings most people to a general consensus. This is also where I found a strong connection to our class and the material we have been reviewing. Each answer was inspired by an idealistic view of striving to be someone that is liked and respected. Just like in the class we are working to reach common goal by commutative input, each person have a common goal of who they want to be. The main difference is in the way were try to get there. Although the conversation to did move towards the a step by step game plan on how to accomplish this goal I think it is beneficial to be reminded that we are all striving for the same end game.

Diversity was seen again when religion was thrown into the mix. Both parties agreed to we should treat people justly, but where they drew their moral guide from was not the same. The people who identified as religious were Christian and those who were not were either agnostics or atheist. It was about a fifty fifty split.  Under the circumstances of a group or people that already willing associate, this controversial topic of religion, which lead into politics, was very civil. The agnostic perspective thought religion should not be the say all of what determines how we treat people. Interestingly enough, Mary and I’s friendship embodies the Kentucky kitchen table dynamics we had set up. Mary was able to relate to the agnostic point of view, while I resonated with the side of the discussion who pulled their view from religious back grounds. The Bible was reference by Gabby when she said how she values the golden rule: treat others the way you want to be treated. Ultimately this influenced the discussion toward what obligations do we have towards others. This is when politics found their way into the mix. Each person believed that the government and we as individuals have an obligation to treat others with fairness and kindness. However remarkably so as much as we might be able agree upon this as a society and a small group around a dinner table the feelings toward the elections still varied drastically. Even though I am rooted in a strong political stance like most it was refreshing to hear each person’s perspective discussed with such respect for others. On the one hand about half the individuals confessed to voting for Trump while the others half was in unison against Trump. Those in favor of Trump were goal oriented toward economic change that they believed would serve the general public. Those against Trump believed he stood for values that would deteriorate this society. Although the majority Trump supporters could sympathize with their friend’s feelings they still held true to their beliefs. In the end no one was thrilled with the state of affairs our society had been thrown into due to the election. As much as I wished the common ground could be that of rejoice it was not. The meat of the conversation came to a conclusion when we asked, “In retrospect of this how do we live better together?” Andrew mentioned that we must both respect the outcome of the elections and each other. While other might have not mentioned respecting the outcome of the elections all voices at the table agree on respecting their fellow citizens.

After sitting in on a group of people I had never met before, I learned that at the end of the day we are always more similar than different. If we look for similarities we can always find them and if we look for differences the same is true. What is important is that we emphasize our similarities. In regard to David Brooks’ take on the moral framework of today’s youth, discussed in his New York Times article, “If It Feels Right…” I would say these types of conversations prove him wrong. Not every meal is oriented around in depth discussions, but the fact that we can have one and express our opinions with respect and thought out reasoning is what is important. The elephant and the rider (from Jonathan Haidt’s book The Righteous Mind) were also prominent in the group discussion because people reasoning were rooted in the way the felt about the topic. I hope that these talks and hearing others similar goals with facilitate more thoughtful discussion that will continue to help this world answer the question of how we live better together. 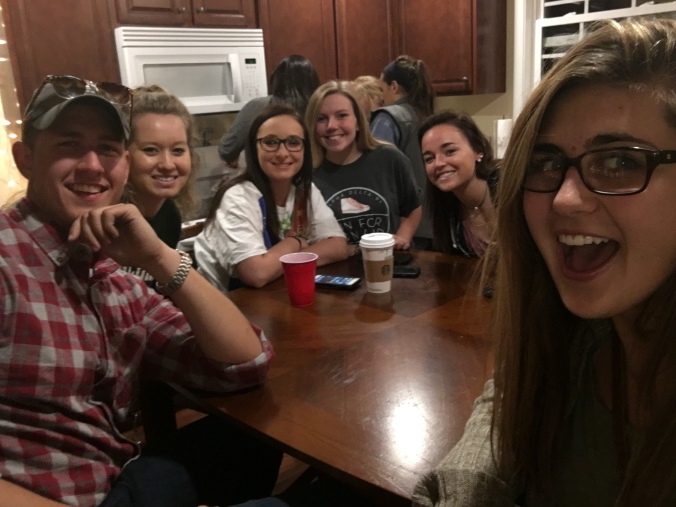