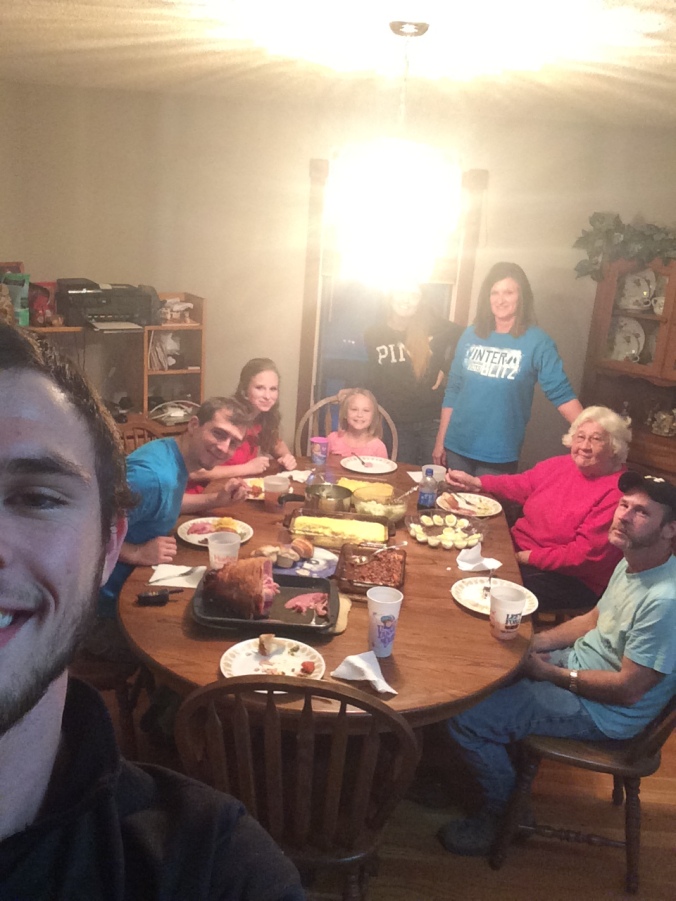 I will start off by saying that I greatly enjoyed this Kentucky Kitchen Table project. It allowed me to connect with some local people in my community and share some of our life experiences. I had dinner with eight people from various backgrounds. Luke is a man from Indiana who I was introduced to through a friend for this project. He is a mechanical engineering major. He is a funny guy, who has a very similar sense of humor to mine. We got along well from the beginning, and he was a great addition to the kitchen table. He wanted to be described as a kid from a small town who has never had anything given to him. Everything he has came from his own hard work. For the required question concerning what citizenship means, Luke said that citizenship means that you get out and participate in society. You work hard every single day, and try your best to make your dreams come true. You make money and spend money, and that’s how society works.

Kayla is a graduate from WKU, and has a degree in civil engineering. She is my sister, and she is an academically brilliant student graduating with an almost perfect GPA and Honors. She now has a full time job in civil engineering. Kayla wanted to be described as not your typical girl. She works in what some consider a man’s field, and has never been interested in most of the “girly” things. When I asked Kayla what citizenship meant to her, she had a similar answer to Luke saying that you must participate in society. She believes that citizenship means treating everyone with respect.

Mallory is my girlfriend, but she comes from a very different background than me, which provided even more diversity to the table. She also attends WKU and is majoring in Civil Engineering. She comes from the “cross town rival” independent school and was raised up in a more subdivided area. Citizenship means accepting everyone as they are to Mallory. She says that even if you do not agree with the way someone thinks or feels you should still accept them as they are.

Elaine comes from a background of only having enough to make ends meet. All through her life she has not had a surplus of money so she is very economically wise and very responsible. When I asked her about what citizenship means to her she had a very simple answer. She said that being a citizen means to contribute to society and make sure that you treat everyone with an equal amount of respect because everyone is made equal in God’s eyes.

Marietta is an elderly woman who has not had it easy from what I can gather. Recently her husband of many years passed away due to an ongoing illness. She said that one of her sons was in prison, and that another had a long fight with drug addiction that he recently conquered. The easiest word that I can find to describe this woman is tough, because she has had a lot of tough times in her life and she has always come through it. Marietta said that citizenship means loving this country and fighting for what you believe in.

The final guest I had at my kitchen table was a man named Kevin who was told a few years ago that he would never walk again. He was involved in a horrible four-wheeler accident that broke several of his vertebrae along with other injuries. He was rushed to UK hospital where he underwent immediate surgery, and at the conclusion of the surgery he was told he would never walk again. Yet, here he was walking into my house to have dinner. Kevin wanted to be described as a fighter because he said it seemed like he was always the under dog. When I asked Kevin what he thought citizenship meant, he said that citizenship meant trying your best to help others out around you.

Throughout the dinner we had a lot of small talk conversations about how everyone was doing and we all shared a little background about ourselves to begin with. Then, since I had been hunting the morning of the kitchen table project, I was asked if I had gotten a deer yet, and we spent a few minutes exchanging our best deer hunting stories with one another. One of the most well responded to questions I asked was: “Did you ever have meals around the table with your family or neighbors growing up?” This question seemed to almost be universally answered as a yes except for Luke. Luke said that his dad worked a lot as he was growing up, and that he didn’t really get to spend time just sitting down and eating dinner with his family. Both Kevin and Elaine responded yes to this question. They thought that it was a normal thing for a family to sit down at the dinner table and have a home-cooked dinner together almost every single night. It was something that they had done ever since they could remember, and couldn’t imagine what life would’ve been without that. Elaine said she felt that this dinner together made the family stronger, and made them get along better.

I honestly learned a lot at this short dinner filled full of conversation and good food. It can really open your eyes to the changing generations, and the differing views between every person no matter how similar they are. This reminds me very strongly of the idea of deliberation and the book Citizen by Claudia Rankine. As I sat at the kitchen table, I was very aware of the differing view points surrounding the table, yet we could all talk about our beliefs and views without offending anyone. That is the goal of deliberation and democracy is to understand everyone’s views and come together to form a better society. Finally, it reminded me of the book Citizen by Claudia Rankine because of the fact that everyone at the table mentioned at some point or another that no matter the skin color or views or ideas we all need to accept one another regardless of the circumstances, and that is very important.

Overall, I truly enjoyed this Kentucky Kitchen Table Project, and would suggest it to anyone. It opens your eyes to the way generations are changing, and how everyone has differing view points no matter if you’re from the same state, city, or household. It was a great experience and I’m glad I was able to participate.