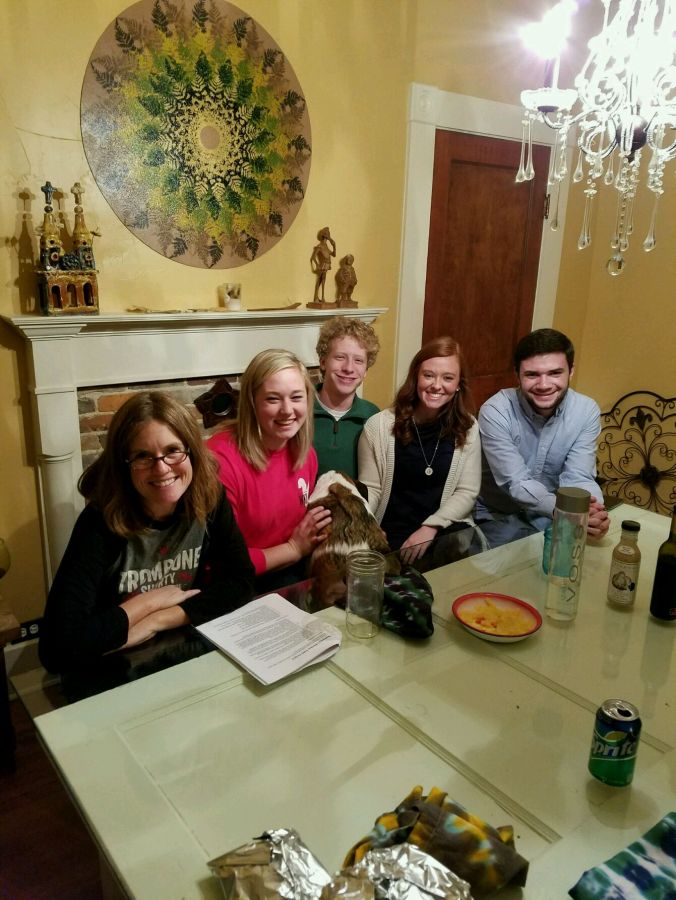 To begin, my group no doubt had the best Kentucky Kitchen Table. Before even arriving at the house, I was able to provide Ally and Jacob a ride to the location. We made a quick dash into the local Walmart for a last-minute purchase of a pizza topping: Jacob- mushrooms, Ally- pepperoni, myself- pineapple, then began our journey to Christian’s beautiful home. During the approximate 20 minute drive, we had a nice conversation on the prior week’s election results, some of us celebratory, others mournful. We also discussed Jacob’s recent surgery to remove his gallbladder. I’m sure I asked him an excessive number of questions being a pre-med student.

When we arrived at Christian’s house after a beautiful ride through sun-setting Franklin with only one missed turn, the house looked… worn. However, with one step in the back door, I was in awe. Christian described the house to be over a hundred years, a simple explanation for a rougher exterior. However, the fruits of her 11 years of labor were extremely obvious with the interior. Her home looked like something out of “Home Design.” It was beautifully restored, retaining an antique feel with a modern touch, a perfect representation of Christian’s aesthetic I would later discover. We were greeted by not only Christian, her partner Chuck, and Madeline, but two very pretty, very personal canines.

We received a brief tour of the house to begin, only increasing my amazement with its beauty. Conversation then started off with slight hesitation, but we all quickly warmed up. As Christian is WKU’s Sustainability Coordinator, a lot of conversation revolved around sustainability. Jacob discussed a project he is working on looking into renewable energy sources. I then brought up some of the recent successes of the WKU Student Government Association’s Sustainability Committee led by my friend Savannah Molyneaux. As a senator, I had the privilege to hear about things such as the implementation of reusable containers in Fresh and the beginning elimination of bags at Subway. We then discussed more exciting legislation such as the resolution to eliminate Styrofoam on campus, as well as establishing the Sustainability Committee as an SGA permanent committee  The passion Christian spoke about all of these efforts was as awing as the place she called home. As we all chatted, we began the exciting task of making homemade pizzas. This act promoted a great sense of group bonding before ever even taking a seat around a table to eat. We didn’t take the act lightly however, engaging in the promising practice of deliberation to weigh toppings and values. At first I worried we would become caught in the “snare of preparation”, but luckily our growing hunger prompted us to action. We yielded astounding results.

When we finally set down around a table, we were fortunately already familiar with one another. Through conversation at the table, I best learned about each individual. We began with the required question-Beyond voting, paying taxes, and following laws, what does citizenship mean to you? Chuck started with a description of citizenship in the terms of our military members. Their sacrifice and the safety that him and other Americans feel in their home country is the best example. Ally then took a stab at citizenship. In her eyes, American citizenship was being able to practice what you believe, in her case Christianity. She described the persecution Christians face in some other countries for simply trying to practice and spread what they believe. Madeline followed with a response similar to Ally’s, focusing again on the freedoms we are privileged to have in the United States. Christian then, in my perspective, stole the show with a story of three women in Bowling Green who were simply challenging the status quo. One such individual was contradicting the way we view homeless individuals. For example, the idea that some individuals feel uncomfortable with the idea of home ownership. She hit heavy on the aspect of meeting marginalized people where they are instead of trying to tell them what they need. Jacob was next, and discussed a community aspect of citizenship similar to mine . I had the chance to round out the question. I focused on a more universal citizenship over American specifics. I described citizenship as people contributing what they’re best at in order to form an efficient community. The varying responses in even this one question represented the diversity of the group. The only other specific question we had time to focus on was “what we think are the best things about the world today?” There was a near group consensus that the best part about today’s world was technology that brings the whole world together. In other words, the increasing globalization is moving us towards a worldly community. We determined this is a beneficial thing for understanding and peace, as long as we are retaining pieces of cultures and the western world is not crushing others.

After everyone had finished their meals, Jacob and Chuck went in to the living room for a brief time to watch the football game. Ally, Madeline, Christian, and I stayed in the dining room. We discussed gun rights as earlier Ally had explained a story in which she had wielded a firearm in order to deter a man trying to steal a trailer from her house. Ally and Madeline seemed to side more on the protection of the second amendment, while I was more for the limiting of firearms for greater public safety. While little opinion change occurred, mostly due to the brevity of the conversation, we all agreed on Christian’s statement of wanting to keep guns out of the hands of the wrong people, such as through more extensive background checks and closing loopholes. We successfully found common ground, an important part of working together.

When Jacob and Chuck reentered the room, we all began to clean up and work towards the conclusion of our night together. Ms. Ryan packaged up leftover pizza and gave us each a jar of the amazing vegan pumpkin chocolate chip cookies she had prepared. Madeline had to quickly leave in order to get back for cheer. We all thanked Chuck and Christian for hosting us and Ally, Jacob, and I loaded into the car to drive home.

In summary, we had a very diverse group. Ally and Madeline had similar views and identified with the same religion, but varied in their extent of expression. Ally was much more outspoken, while Madeline was more reserved. Jacob was also very verbal and always added interesting ideas. Christian and Chuck were the most interesting pairing. Chuck, as former U.S. Marine, had a very patriotic, national view, while Christian focused on small, standout community action. The most valuable thing I took away from my KKT was from Christian’s citizenship stories. Connecting it to the bridge we discuss in class, the way we get from where we are to where we want to be, however defined, is by rethinking how we look at a situation. As with wicked problems, the proposed solutions evolve from what perspective we take. In order to formulate the best solution, we must consider them all, requiring a new situation analysis which is outside the mainstream. Overall, my KKT experience far exceeded expectations.