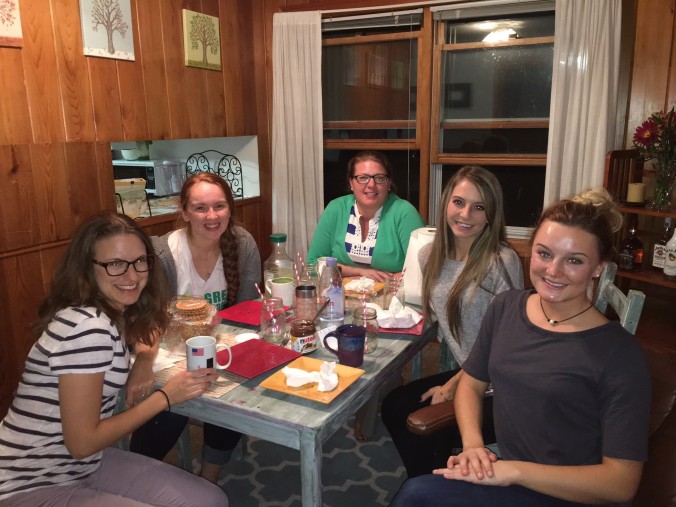 I never really thought that I’d find myself at a stranger’s house for dinner, nor did it sound very appealing, but 10/10 would recommend. I’m more of an introvert and having conversations with people I don’t know makes me nervous. So I’m glad I was kind of forced to break out of my shell because I would never have done this on my own.

Kaylin, Amy, and I began our little journey using Google Maps to try and find where we were supposed to go. After a few wrong turns we finally made it only to realize there were two doors and we had no idea which to go in. After circling the house, we finally decided on a door because we could see people cooking through the window. When we walked in we were greeted by Alison’s dog, Hazel, and then Alison and Leila. Alison, our host, teaches in the English department at WKU. Leila was a guest also eating with us who teaches Citizen and Self at WKU. I guess I should also give a brief description about me and my classmates. I’m from a small town in Kentucky, Kaylin is from an even smaller town in Kentucky, and Amy grew up in a bigger town in Tennessee that neighbored an army base.

After introducing ourselves, Alison put us to work right away chopping vegetables and setting the table. I’m glad she gave us something to do to make the meal seem more like a team effort. We made small talk while doing so and once everything was ready, we took our plates and sat down to eat. I was starving and was super glad that we were having chicken tacos instead of some weird vegetarian food that Kaylin, Amy and I had joked about on our way there. We first talked about our majors and different little things about ourselves. Then Alison really got my attention when she told us about her college experience. She had originally gone to college with the goal of becoming a lawyer but then she got a random opportunity to go teach English in Japan. Since she had never gotten to study abroad, she took up this opportunity and ended up falling in love with it. She stayed for two years in Japan and went on to teach other countries as well. She dropped the idea of becoming a lawyer and became a teacher instead. Her advice to us was just try everything and jump at the random opportunities. This made me think of the Jane Addams reading for our class “Snare of Preparation.” We have to just throw ourselves into the world and not really think about it. We just have to actually do it.

As we were eating, Leila and Alison were guessing spices that were in each other’s dish. They both seemed to really like to cook and it wasn’t your normal everyday country cookin’. They knew a lot about different ethnic foods and seemed to have tried it all. Alison says she learned a lot of it from her experience in Japan. They gave us some suggestions for the best places to get sushi and told us to visit the salt cave in Bowling Green if we ever needed to clear up our sinuses.

We then decided we should probably ask the question of the day, “What does citizenship mean to you?” Leila laughed a little saying that she should have a good answer to it since she teaches the class and then Alison said that she thinks it means recognizing that everyone is dealing with something. I immediately started to wonder if she had sat in on one of our classes because those exact words have come up many times in our discussions about empathy and how to live better together. I was not expecting her to say something so dead on to what we have been discussing all semester. Honestly, I was expecting Leila to say something about it since she teaches the class, but she just agreed with Alison and added that we should always think about why a person is acting the way they are, maybe they’ve had a bad day, or maybe they weren’t brought up the same way we were. We had a small discussion about citizenship, much like ours in class, about putting ourselves in another person’s shoes.

We then got on the topic of dress codes at our high schools. We talked about how Amy and I had teachers that would sit at the door as we walked in to look at how we were dressed and make sure it was appropriate. We mentioned how guys were allowed to wear shorter clothes than us and then Leila made a comment about imagining if all of this time was spent teaching men about consent instead. This conversation eventually led into the talk about feminism. Amy mentioned how surprised she was by how few people stepped forward when asked if they were a feminist in the game we played in class. I have to be honest, I didn’t step forward in class because I thought that it meant that I got super offended when guys made jokes about women or got mad if a guy held a door open for me or something. I didn’t know that it actually just meant that you believe women should be equal to men. Someone mentioned that people just don’t know how to express themselves and Kaylin went on to tell a story about her boyfriend’s mom talking about how she didn’t believe in interracial marriage but eventually went on to say that she just didn’t want it for herself but she didn’t look down upon others who do it. Sometimes when people say things, they don’t actually mean what it sounds like. Sometimes things are definitely worth deliberating on.

We moved onto dessert, which consisted of cookies, Nutella, and goat caramel. After Alison said it tasted “goaty” I decided I would pass on that part of the dessert. However, everyone else seemed to really enjoy it. Alison offered us tea with rice in it and I decided that I should probably pass on that as well. As you can tell, I’m not very adventurous with the foods that I try. We wrapped up our conversations and said our goodbyes. Instead of the dreaded dinner that I had imagined, it ended up being my favorite part of this class. It’s not too often that you actually sit down at a dinner table and have a home-cooked meal filled with meaningful conversations, especially in college.