When this project was first assigned, I was somewhat hesitant to jump right in. The idea of having dinner with a bunch of strangers was somewhat daunting to me because it usually takes me a little while to warm up to people before I’m comfortable enough to have a more serious conversation with them. However, this project was not nearly as awful as I thought it would be. 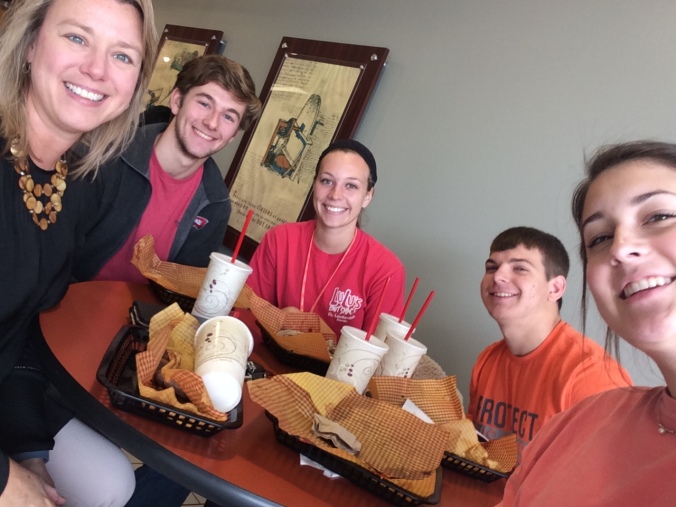 A little bit about our group:

Obviously, our group was a little bit skewed in terms of majors, but we were diverse in other ways. For example, except for Nancy, and Wil, we are not from Bowling Green and are still not very familiar with the area. Also, Ellery and Scott grew up in more rural areas as well. Although everyone in the group participates in Greek life, no one belongs to the same organization. It was very interesting to see how our similarities and differences both contributed to our conversation.

The original plan was for our group to meet at Nancy’s house and have dinner with her and her family, however there were a few scheduling and logistical conflicts, so we adjusted our plan. We ended up meeting in DaVinci’s on the first floor of Snell Hall here on campus, and we all enjoyed our choice of pizza from the restaurant. At first the conversation was a little bit awkward and just a lot of small-talk, but after we got into it, things started to flow more smoothly.

We started off with the required question: “Beyond voting, paying taxes, and following laws, what does citizenship mean to you?” Nancy explained that to her, citizenship requires personal responsibility from everyone. Everyone really just has to do their part in contributing to the overall good and benefit of the community. This requires a lot of understanding and communication, which are topics we have been learning a great deal about in our class this semester.

We also talked about what we thought were the best aspects of our world today. Nancy said that technology has been very beneficial in terms of communication and having access to a multitude of information from around the world. Again, this benefits the way people collaborate and communicate with each other, and I think that technological advances will only increase in the future. However, we also discussed the downsides of technology, such as how everything is becoming the same in terms of language and format, which lessens diversity in communities.

A third topic that we discussed is the concept of neighbors. Ellery, Wil, and I mentioned that we all grew up being very close to our neighbors, and it has always been a very prevalent aspect of our lives. Scott added that he does not have much experience with neighbors because he is from a more rural area in Louisville and did not live in a neighborhood. Nancy told us that her family does have neighbors where they live in downtown Bowling Green, and that the kids are similar in age, however they don’t always hang out together.

Acting in a neighborly way with consideration for others is a significant part of being a good citizen. For example, Nancy mentioned that her family decided to install a fence in their backyard because her family has chickens, but they were somewhat of a nuisance to her neighbors. Because Nancy and her family valued their relationship with their neighbors more than letting the chickens roam free, they put up a fence to keep things peaceful.

We then got to talking about what kind of people we want to be and we want our children to be, and through this, there was a heavy focus on service. Nancy’s parents raised her in a way that emphasized service to others and to the community, and this is what she is teaching her children now. My parents instilled the same values in me and I had many opportunities in high school to serve my community. I also have the same opportunities to work in my community in college through my sorority, and I know Ellery, Scott, and Wil have similar opportunities as well.

Overall, the Kentucky Kitchen Table experience was very enriching and not at all awful. I realized that even though I could see obvious differences among our group, the conversation revealed many similarities that connected us in ways that we wouldn’t ordinarily realize. Although we may have different backgrounds and beliefs, the members of my group we able to find common ground and agreed on many simple ideas about community. I think that this realization is a key part of living in a community and acting as a good citizen towards others. This project has emphasized the class themes of how we can live better together and what it means to be a good citizen in today’s world. We can do this by taking responsibility and contributing to the overall good of society through acts of service, consideration for others, and communication and understanding.