Going into this assignment, I was very nervous. I was not sure how I was going to find almost complete, or complete, strangers to have dinner and discuss citizenship with me. However, I completed the Kentucky Kitchen Table dinner with two girls (Katy and Baylee) from my class. We each asked two people to attend the dinner. There were nine people at the dinner. Katy, Baylee, and I prepared garlic bread, salad, pasta, and brownies for our guests. We each provided equal effort to the dinner, going to the store purchase food items and kitchenware and also cooking the meal together.

The nine dinner guests were as follows:

I was not sure how well the conversation would flow among all these college students, the majority of us freshmen. However, our group had some very good conversation. Even though some of us would be considered introverts, everyone participated in the conversation and seemed to be getting along very well. Baylee and her friend Seth were extremely helpful in keeping the conversation going, as they are both openly funny and loud people. Also, in the middle of our dinner, a graduate student named Yugen (more commonly known as “Loud Asian”) walked into our dinner and asked to eat with us. He provided some extra diversity to the group. After Yugen left (because he shoveled that pasta in as if it was going to escape him), even more conversation was provided among our group. We discussed all the entertainment and diversity Yugen brings to the campus of Western Kentucky University. He can often be found wondering around campus in his martial arts gi, meandering outside the Downing Student Union talking loudly on the phone, or even found watching martial arts videos in the computer lab in Mass Media and Technology Hall.

When Katy, Baylee, and I presented the question, “Beyond voting, paying taxes, and following laws, what does citizenship mean to you,” there were a few different answers, but one of the most memorable, and one that all of us seemed to agree with was as follows. Anne shared that she viewed citizenship as being able to voice your opinions and values publicly, without fear of being reprimanded by all those around you; as a United States citizen, we are allowed certain rights and freedoms, and this is part of what makes us a diverse nation that can be one of the most unified. We also discussed whether or not we knew our neighbors (from back home, not in the dorms), and there was a variety of answers. Some of us lived in rural areas where our houses were not close enough to really know your neighbor while other of us knew our neighbors very well. Some even shared that they and their neighbors do not get along for various reasons.

As we discussed some of the recommended questions at dinner, we realized how well the Kentucky Kitchen Table dinner was connecting with our class. When discussing citizenship, we related it back to the idea in our class that we have desires to see and be part of a better world. Looking at the bridge illustration, we see our world and how we would like it to be, but we are not always sure how to get from one side to the other. At our dinner, we discussed that one of the only ways to change our condition is to be a better, more involved citizen. People must exercise their rights to change the world, and they need to be willing to listen to another person’s point of view rather than lashing out and ignoring it. This is something we practice in every class meeting. Our Honors 251 class discusses different readings and social issues presented in the class curriculum on a weekly basis. These deliberations have taught us to be better communicators. Even though many of us have similar backgrounds, we were respectful of differing views presented during open discussions. While an opinion different from ours may not have changed our minds about our opinions or views, we have learned to be very open and considerate when listening to others.

Baylee, Katy, and I reflected on the assignment while we were cleaning up after the dinner. We all were nervous about the assignment at first. It was a very pleasant surprise. We all seemed to share the same feelings, wishing we could share a meal with a different group of diverse people at least once a month. It was a nice and enjoyable experience to be able to meet different people in a friendly environment while sharing a meal together. 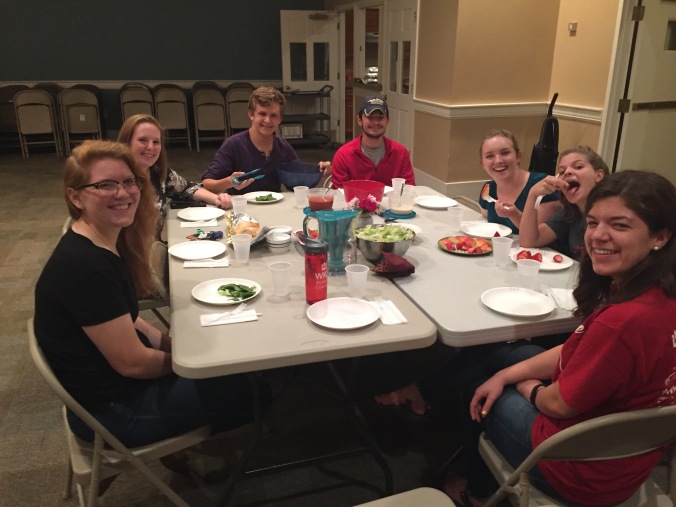