Going into this project I had no idea what to expect, other than maybe awkward and forced conversation on a rainy Wednesday. What I experienced was a totally different thing altogether. This has and will be my favorite memory of Honors 251, something I would have never guessed beforehand. The hosts, a writer couple, of the dinner were not only great cooks, but very interesting and kind people and I had the pleasure of getting to peer into their lives for a night. The group was diverse in many ways, with our beliefs (Christianity, Islam) and backgrounds, and the conversation was always respectful despite the differences. Abbas, a bio major hoping to become a plastic surgeon. Abbas is not only Muslim, but also in a fraternity which led to some funny stories. I did not know Stephanie’s religious beliefs, but she is also a bio major and an un upperclassman, she was a transfer student from a school in Florida. David and Molly were both writers who love going to parties together, traveling and have Catholic roots but are not religious. Something that surprised me initially is that Molly asked me to pray to start our dinner, but I felt that made all of us all open to one another. Talking about through introductions and Molly sharing interesting stories of a bizarre house party and her time in college at IU, we began to eat. Molly insisted on us not bringing food and providing the appetizers, main course and desserts. Molly and David described citizenship to us as being aware of what is going on in the world and also being courteous to those who were not as lucky. They explained that they felt citizenship was more of a relationship with ones community and country. Between our conversation starters many small conversations popped up, such as the stereotype of Christian gun owners, the presidential election, and even young marriage. Molly was surprised to hear that my family and I though Christian, were not pro-gun and I had the opportunity to share my beliefs on gun control and why I do not think being armed aligns with Christian values at all. Another interesting topic we discussed was our neighbors, and if we interacted with them or truly knew them. Molly and David were not particularly close to their neighbors due to them being very different. After David talked about his passion of teaching English at WKU and his love of different books that myself and the others had no previous knowledge of. Both of the hosts grew up and had fundamental knowledge of Catholicism which helped them understand my Christian background and upbringing. Our conversation jumped around for a while as we enjoyed a warm batch of brownies. We then talked about the stresses of school and our future, Molly did a great job of helping calm us and help us think about the big picture and making friends and having a good time. I took away a few things from the dinner that stayed with me, the first being how badly Christians often represent our faith. Molly and David had obviously had bad experiences with Christians that shoved their beliefs and political views down their throats. Something that was a positive takeaway from the night and the class in general, is that I learned being a citizen is more than paying taxes, and being kind to strangers. It is being aware of your situation and seeking improve not only your life, but the as well as the lives of others. This dinner and the conversations we shared was a great example of people who do not agree on religion or politics, still being able to enjoy each others company. 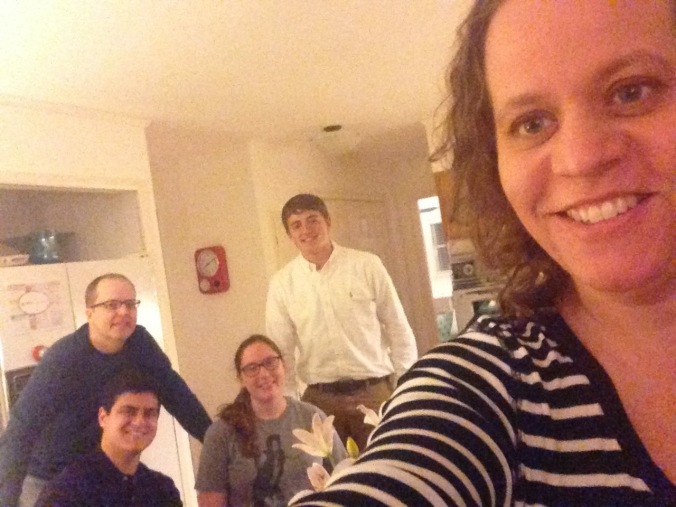