On Saturday, April 9th, I went to have a dinner with my friend Dominic, who is in my Honor 251 class, and people that I have never talked to and met before. I was very nervous about having to eat with random people and being in an awkward atmosphere. I usually do not eat lunch and dinner with my friends, because it provides me extra time to do other urgent things that are in my priority list. I thought this assignment will turn out to be terrible and challenging, but my assumption was wrong.

There were total of 4 people in my Kentucky Kitchen Table (including my self), all of whom were college students. Jared and Emma hosted and invited Dominic and me to their apartment near WKU to serve a dinner. Jared, senior and major in English in WKU, was the main cook who provided us with the delicious chicken noodle soup. This was actually my first time eating true “American food” other than hamburgers and pizza, and it was very delicious that I had to eat more than twice.  And Emma was one of his roommates, currently planning to transfer to college in Oklahoma. She used to go to WKU, but once she decided to transfer to Oklahoma, she got out of WKU and started to work in a candle store.

Contrary to my prediction that it is going to be awkward, it was very exciting to talk and share my thoughts and ideas to Jared, Emma, and Dominic. I talked about how difficult it was for me to come and having a dinner with them, since English is not my first language. I shared the frustration of being left out in the American college community due to poor English speaking ability and cultural difference. We talked about how Asians  like to get along only with people with their own kind and I explained that, this was due to the culture difference. There are certain things that Asians could form a common ground and agree and understand, while Americans can not. For example, when my roommate and I went to Greenwood shopping mall, my roommate gave me a weird look as I was spending my time in Hollister, and with his weird look, he asked me ” Hey, man what are you doing here?” He could not understand the fact that I was trying to buy clothing in Hollister, and he told me that Hollister was for high schoolers. In Korea, Abercrombie and Hollister struck the clothing markets, and they have become more popular and famous than Polo and other famous brands that many college students prefer.  In Korea, people regards being respectful to the elder as one of the significant cultural value. Being insulted by 2 years younger roommate made me realize that it is very difficult to fit into American culture, which became a barrier to socialization with American students. The Asians’ tendency to get along with other Asians is because they feel comfortable and agree on things more easily than when they are with American students. The hidden difficulty in Asians’ college life relates to the topics mentioned in  the “Paying for the Party.” Colleges should not view international students as influx of money, but great assets to diversify the college culture. Many students come to college pursuing their own pathways, and colleges can facilitate this by actively engaging. For example, WKU has done a great job to enrich American college experience to international exchange students by assigning American students to exchange students.

There were many other topics that we talked about after dinner, such as wicked problems, religions, gay marriage, and which historic person you would like to have dinner with, etc. Among the many topics, we showed much passion especially in a topic relating to college tuition. We talked about how expensive college tuition is, and how the cost of college education prevents many smart students from pursuing their dreams. We came up with some suggestions and possible solutions to reduce the college tuition, such as diminishing the investment on college sports and  on building construction on campus, etc. I mentioned that there are many additional things that are expensive along with college education, such as textbooks. We also noted that everything that has to do with college education seemed to be expensive without great efficiency, and that acceptance rate is very high, but the efficiency of college education is relatively low. Sternberg, author “Giving Employers What They Don’t Really Want,” says that colleges do not always provide what the employers want, which are the critical thinking, practical problem solving skills, and communication skills etc. If we go to college and get nothing out of it, except for good GPA, colleges are doing nothing good for us, but good for themselves, especially when we are paying tons of money.

After this KKT assignment, I learned that when people come together, we can learn what problems exist in our community, in our nations, and in the world and come up with effective suggestions from different perspectives. By sharing thoughts and ideas, we could discover effective ways to approach these problems, and we could even find issues that we never thought as problematic. I certainly learned that democracy is about individuals’ effort to make the world to live together and to solve the problem. Even if the individuals’ efforts are negligible to bring an impact to the problems, these small steps that they are taking is as significant as taking big steps to take down the problems. And without the small steps, the problems will eventually remain as wicked problems.

Talking to random people and sharing my thoughts and ideas was one of the greatest experience I have had in America. The interaction I had in Kentucky Kitchen Table taught me that in spite of  my poor English speaking ability, I could still actively participate in community efforts. Thank you Dr. Gish, for providing priceless opportunity for me to learn great lessons. 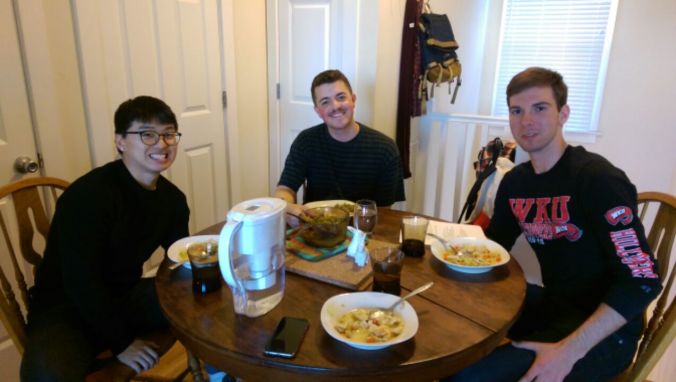 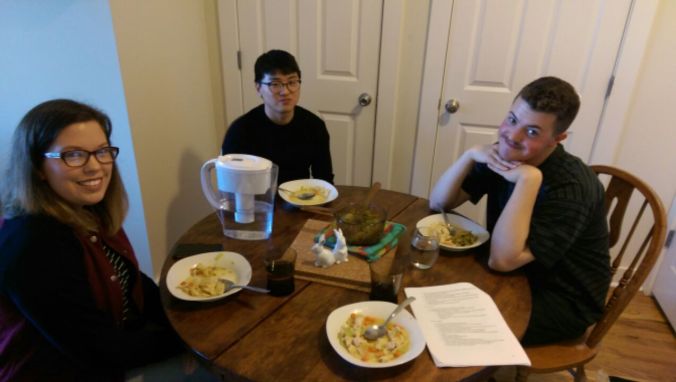