Imari Hammock and I did our Kentucky Kitchen Table project in our hometown of Scottsville. We did the project with a group of people from Imari’s church, all of whom I had never met before. At first it was a little awkward sitting with people I didn’t know and trying to have an in depth conversation about their views on citizenship and democracy, but as the meal and discussion went on I began to feel at home with these people and I’m glad we chose them as our family.

The family offered to fix the meal, and I’m glad they did, I don’t think that we could have made anything as good as they did. They prepared two of Imari and my favorite foods, pork tenderloin and macaroni. I would love to spend the rest of this post just talking about how great the food was but unfortunately I am notGuy Fieri and I do not have a show on the food network YET, so I will now tell of the great discussion Imari and I had with this family.

On the left is Martha and Clarence, a couple who Imari has known for a long time at her church. Hayden, the boy to my left is their grandson, he invited his friend Jordan to the meal. While they are both still too young to really give solid input to the conversation, they did have a little to say before they ran away to play. To Imari’s right was Monica and DJ, Monica is the Sunday school teacher at Imari’s church and DJ is her husband. DJ was the life of the conversation and was very entertaining. While we probably still would have had a great conversation, I’m glad DJ was there as he wasn’t scared to share his thoughts and opinions but also was able to keep the mood pretty light. 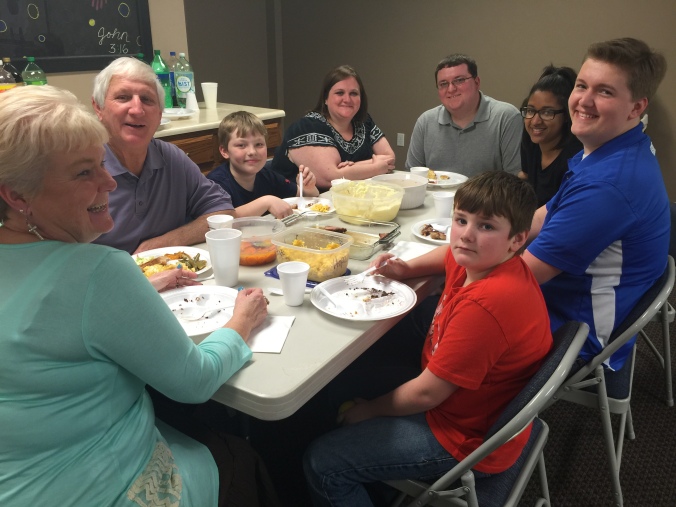 Our conversation went on a little longer than any of us thought that it would, but none of us had a problem with that, we all enjoyed it. One of the first things we discussed was what citizenship meant to us beyond the basics (taxes, voting, etc.). DJ answered first and said that “if everyone learned to respect one another, we would improve the quality of life tremendously”. Martha and Clarence answered next and stated that they are so happy that we live in a country with freedom and rights like we enjoy, but they wished that we could return to the time when people cared about one another. Monica followed them up saying that citizenship, to her, meant being with who you want to be with, really emphasizing the idea of America as the great melting pot.

What was really cool about this project was that, during this conversation, we spoke to a very diverse group of people as far as age and up bringing go, and while we had some very different ideas as one would expect, most of them repeated a lot of the general ideas, especially on their love of their families, community, and God.

I’m so glad that we had the opportunity to eat with this family and have this conversation, because it really opened my eyes returning to what we discussed after talking about wicked problems. When we look at wicked problems like racism or whatever else, we often get overwhelmed trying to think of some complicated or elaborate solution to try and hurry up and solve it, but I think that baby steps can go a long way. If we all just respected each other, many issues like sexual abuse, racism, sexism, etc. would all just go away, and in DJ’s words “would improve the quality of life tremendously.”