For the Kentucky Kitchen Table Project I was paired with Trevor and a family here hosted us in Bowling Green. At our kitchen table we had Madi, from class, along with her parents, Kim and Tim, and cousin Nick, along with my roommate Allison. I had never met Madi’s cousin Nick, who is nineteen, living on his own, and works in physical labor. Madi’s parents I have met before, and Tim is the manager of one of the local plants and Kim is a caretaker for several older and/or ill people. Madi is political science and paralegal major who has trade experience and wants to become a corporate lawyer. My roommate, Allison, wants to go in a very different direction with her art history major by becoming an art conservationist. Allison is also in a service sorority here on campus, while Trevor is in a fraternity. I myself want to teach eventually after my experience teaching Taekwondo in my hometown.

We talked about several different things, but the current presidential campaign was a subject of particular interest. Everyone had a different political perspective, which added to the debate. Allison is a liberal, Madi and Trevor are libertarians, and I change depending on the issue. Nick doesn’t identify with a party, and Kim and Tim are both conservative. We discussed the benefits and drawbacks of all the candidates, for example how Bernie Sanders has good ideas but they aren’t practical because of the country’s already tremendous national debt and how people are inherently selfish and if the tax rate for the rich was raised they would simply put more effort into hiding their money. Tim also made the point that he worked hard to get where he is, and that he shouldn’t be penalized for his work because some other people didn’t work as hard. Allison then brought up how many people aren’t given the same opportunities and go through their whole life at a disadvantage. Kim mentioned that when she was a child her family had an outhouse, but that she was able to go to college. Tim also told us about how an accident when he was a kid blinded him in one eye but that he adjusted to it and can drive just fine. Allison brought up how she also had to adjust to life long condition when she was diagnosed with Type 1 diabetes her freshman year of high school. This turned the conversation to healthcare because of how expensive diabetic supplies are and how finicky insurance can be about paying the correct share. Madi said that even though insurance is awful, free health care would be worse, and proved her point with the state of Canada. I have a cousin who lives there and she’s told me herself that it really is impossible to see a doctor there and that she tries to do as much as she can medically when she’s here in the US visiting family. Tim also brought up that if healthcare was free he would lose his ability to spend more money to pay for an experimental or expensive treatment than what some other people can afford.

We also discussed life on a college campus, and our different high school experiences. Trevor is from Tennessee and graduated with a class of 243, while Allison and I graduated with a class of about 400. Nick and Madi also graduated with about four hundred, and actually graduated from the same high school as her mother, but she was a part of the third class to ever graduate from the school and then there were only a hundred students. Tim had by far the smallest graduating class at only 24 people. We found that the smaller the class size the larger percentage of people everyone knew in their graduating class, but among Allison, Madi, and I we all knew different amounts of people based on what we did in high school. Allison and Madi were both very involved, taking a wide range of classes and getting involved in different types of after school activities. As a result, they knew easily over half of their graduating classes. Trevor was also very involved, particularly with sports, and he knew or recognized almost all of his graduating class. Nick also recognized most of his class. I was the outlier here because I did most of my extra-curricular activities through Taekwondo, which wasn’t associated with my high school, and as such only knew about a quarter of my graduating class. Kim and Tim both knew the entirety of their graduating classes.

The answer to the required question, “what does citizenship mean to you, beyond voting, taxes, and following the law,” stumped everyone for a few minutes. Tim mentioned how important community involvement is to him but he wasn’t sure how to relate that to citizenship. Madi said political literacy, knowing what you’re voting and advocating for. Trevor also made a really good point, especially considering the individualistic state of the country, that being a citizen doesn’t necessarily mean helping others but that it most certainly means being conscious of how far your rights go and not purposefully impeding another’s rights.

I really enjoyed having a home cooked meal that we all chipped in to pay for but that Madi and her family actually cooked. The discussion was also very interesting and enlightening, hearing from all different sorts of people. 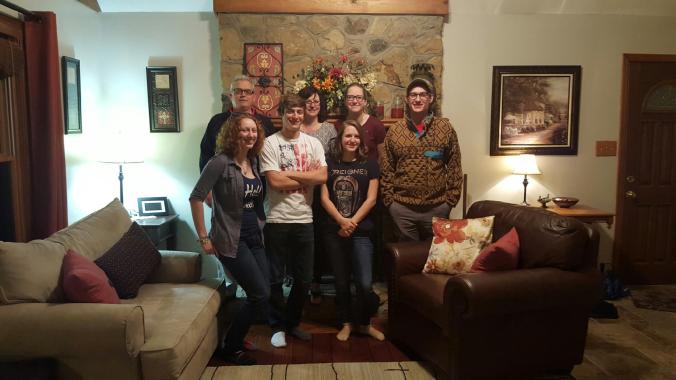