My Kentucky Kitchen Table was hosted at Kamber’s dinner table and was attended by myself, Kamber, John, Jordan, Sarah and Hannah. The only person who I initially knew at this meal was Kamber (my girlfriend) and Sarah. I asked Kamber to invite one person that she knew and I did not, and ask that individual to invite one person, and so on. Kamber invited Sarah and Hannah who then invited her boyfriend, John who, in turn, invited Jordan. Each person at the table is from a different hometown. Kamber is from Lagrange, KY which is a rural area of Kentucky and attended Oldham County High School. Hannah is from Louisville and attended Male High School. Her boyfriend John is from Rochester, New York and attended Brighton High School. Jordan grew up here in Bowling Green, KY and went to Greenwood High School. Lastly, Sarah grew up in Atlanta, Georgia and attended Blessed Trinity High School.

I was debating on whether to start the dinner conversation with the required “What does citizenship mean to you?” but I decided to let the conversation develop organically and see where it went in order to learn more about everyone present. The first question I posed was based on the type of food everyone brought. John and Hannah collaborated on a recipe that John’s grandma told him about. It was lasagna made with ground beef and pepperoni, as well as a layer of green peppers among the other necessary ingredients in lasagna. Sarah brought a side item of rice and broccoli cooked in chicken broth with shredded cheese. She learned this recipe from her dad and went on to say that this was her father’s favorite meal in college. Of all the dishes, this was my favorite.  I made a side item of macaroni and cheese. I explained that in my house, mac and cheese is the equivalent of a vegetable. It is very simple to make as it is just boiled macaroni shells mixed with Velveeta cheese. They may have been saying it to be nice, but everyone claimed to have enjoyed it.

As each person described their recipe and its origins, the conversation would branch off in many different directions. John explained to us his reasoning behind coming to WKU which led to everyone else stating why they chose WKU over other universities. As the conversation went on, the topics being discussed continued to delve deeper and deeper into each individual’s life in their hometown. Hannah and I grew up with very similar friend groups it turns out, yet we never met. We had very similar weekend activities including going to football games, attending night races at Churchill Downs, and going out on the Ohio River. While they are not from the same hometown, John and Kamber each shared similar experiences. During the summer they would visit their lake houses. John would go to Lake Ontario, and Kamber would visit Lake Cumberland. Jordan, along with Kamber and I, said that he would typically be at a bonfire or a farm party on the weekends just drinking and hanging out with friends.

In relation to our class, this project has reinforced the idea that being a citizen requires more of us than simply voting and paying taxes as well as the meaning of citizenship to me. When there is a problem, issue, or injustice in the world, citizenship does not call on us to set out with the intention of solving it alone, but collaborating with others who may have different convictions than our own and who are from all different backgrounds and places to solve the problem as a community. This lesson can be tied back to Jane Addams and her experiences at the Hull House. She came from a completely different walk of life than those she was trying to help. The issues that she set out to solve a problem on her own (giving the candy factory children candy on Christmas) did not go as she had initially planned. The interaction with those in the community and close to the problems in the community led to the Hull House being as successful as it was. While John and I grew up nearly 600 miles apart, our different viewpoints on a given topic can be used to expand our individual thinking and solve community issues which may, alone, be unsolvable.

(Jordan took the picture for us) 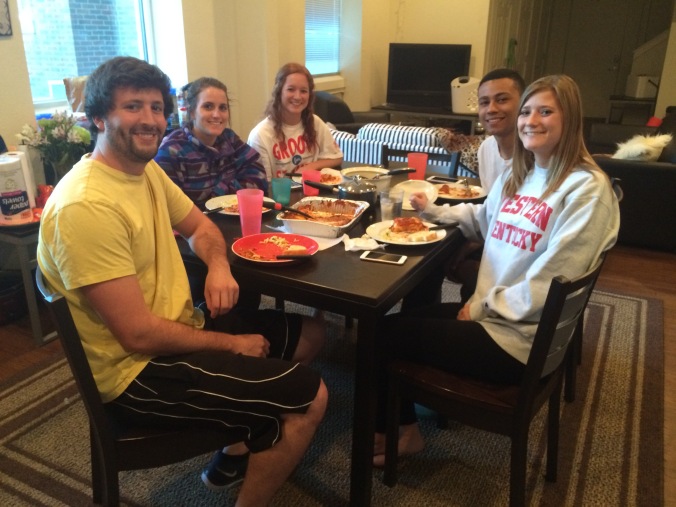